Auburndale Speedway – Here is your first look at the flyer for the 16th Annual Charity Race Weekend ! This year a Friday Night & Saturday Night event, with Sunday as a rain date if needed. More information will begin to be released including purses, schedule, sponsors and more ! Pre-Entry will begin July 1st for Pro-Trucks and Pure-stocks enter early to save money ! Once again proceeds will go to C.A.R.S. Racing’ for a Dream to help children with serious and even terminal illness. Please mark your calendar and plan to join us !

As more information comes out we will be sure and keep you up to date on all the information. 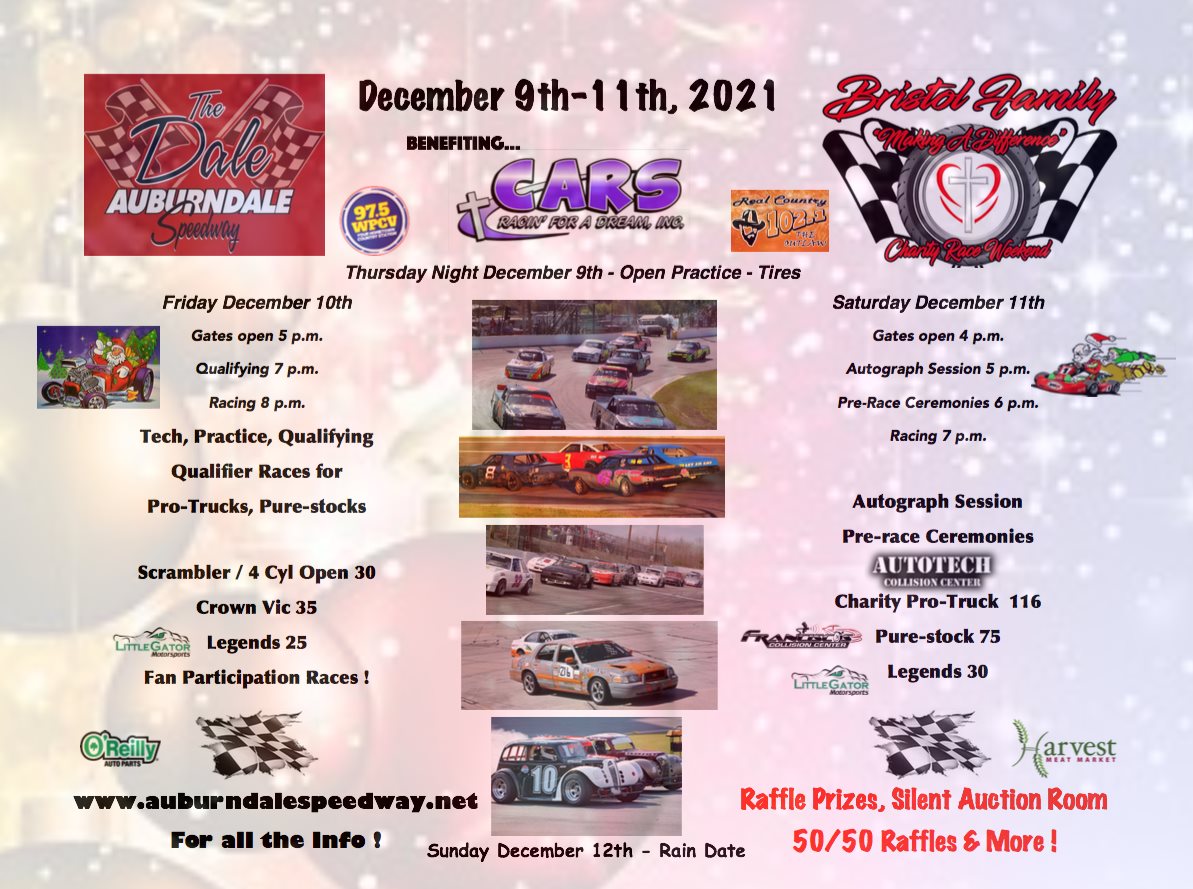 Cody Allen wins both of the twin 25’s for the Street Stocks Saturday at 4-17 Southern Speedway.  Fast Qualifier Danny Caylor had car/motor troubles in both of the two features as putting a charge to the front in both races. 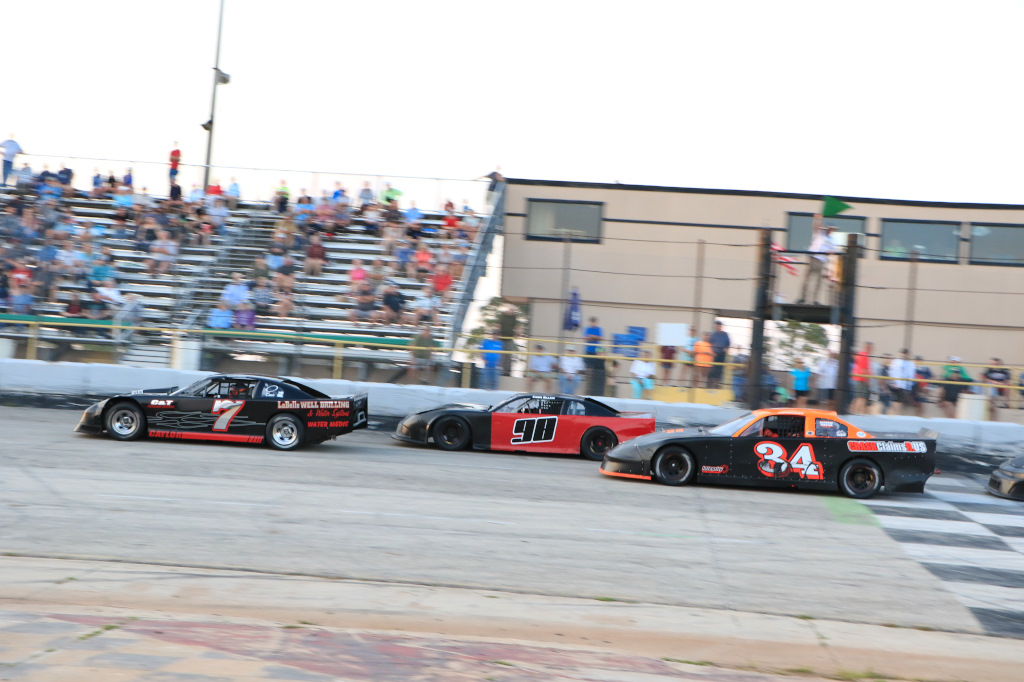 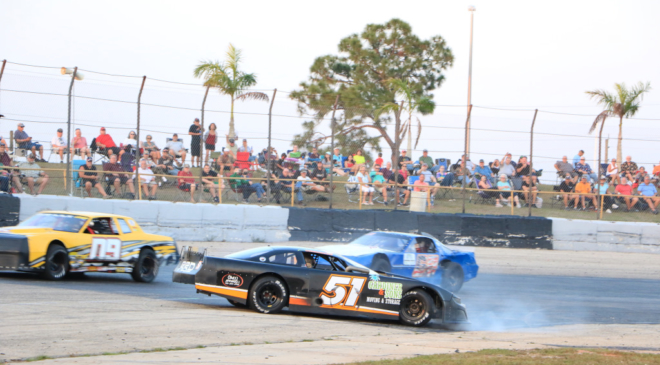 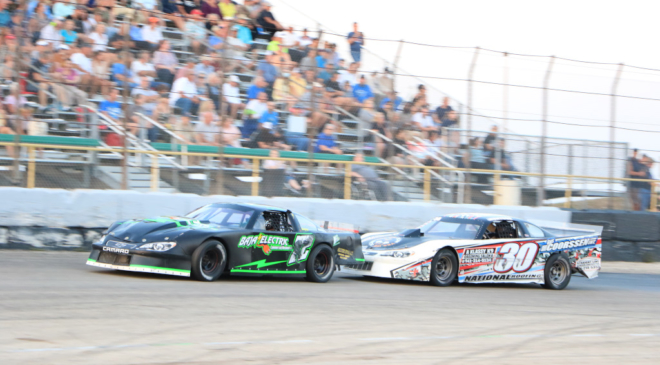 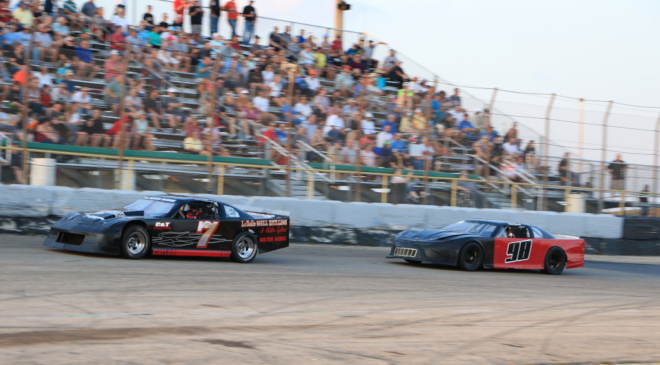 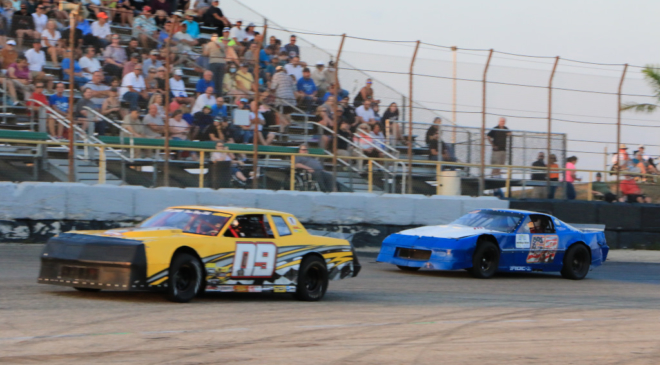 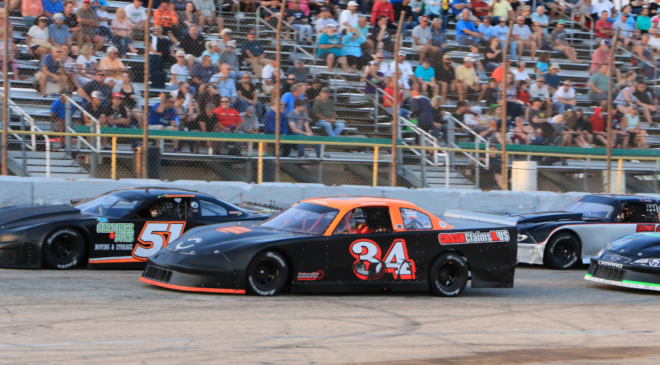 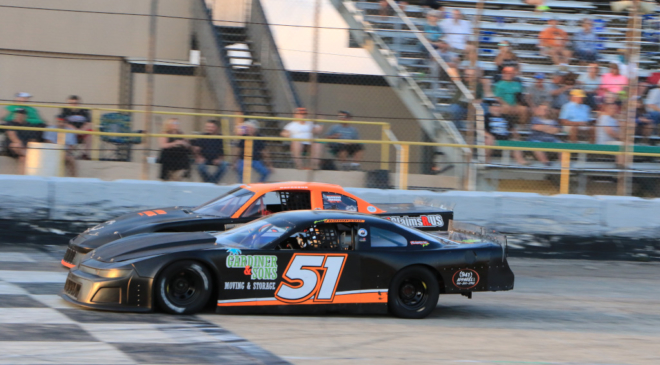 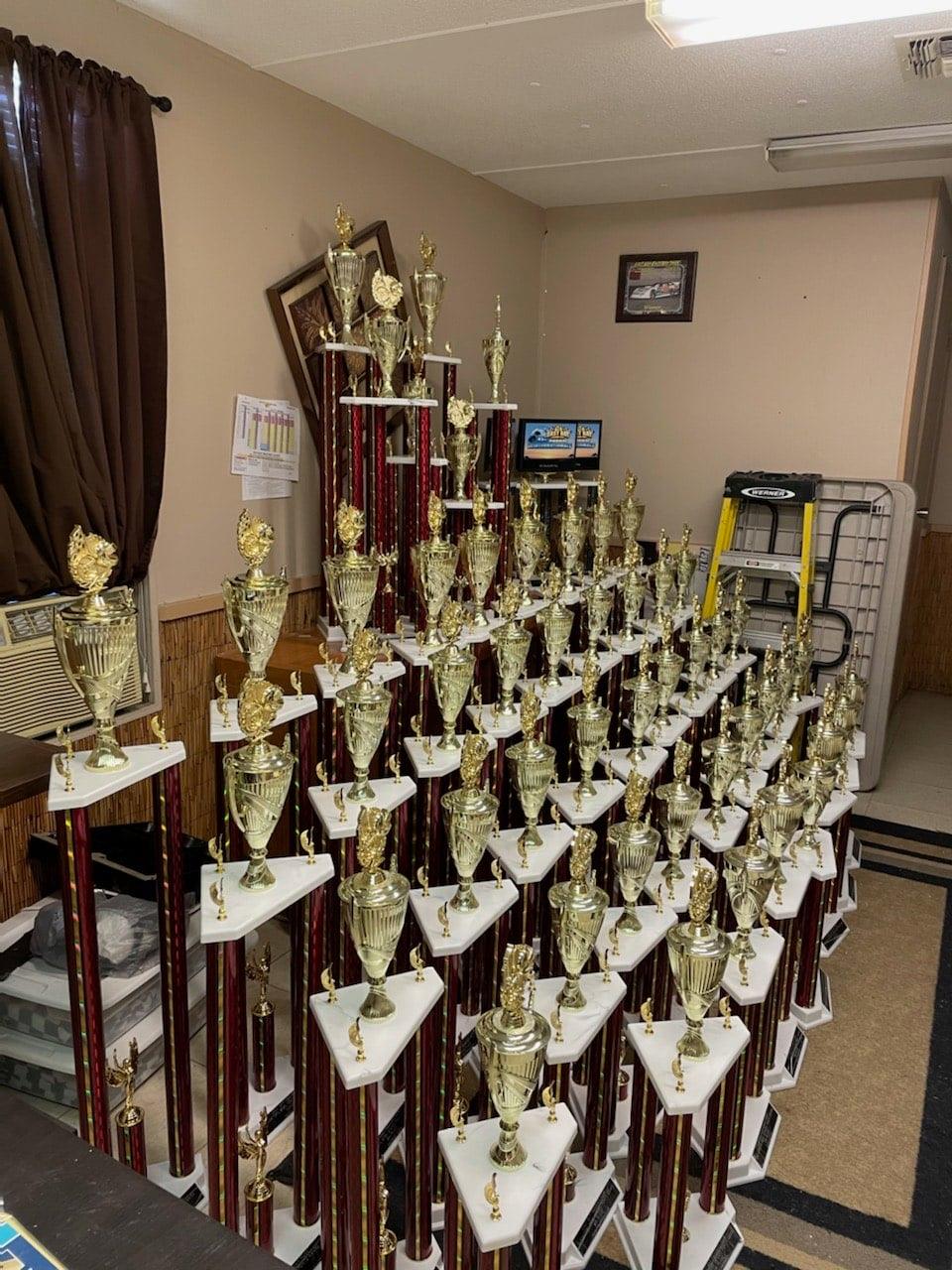 On Saturday at 4-17 Southern Speedway Willie Cuddy locks bumpers with Abigail Jonas and takes a wild ride upside down, down the back stretch.  That would bunch up the field for a shootout to the end of the race but when the dust Settled TJ DeCaire would not be denied his forth win in a row. 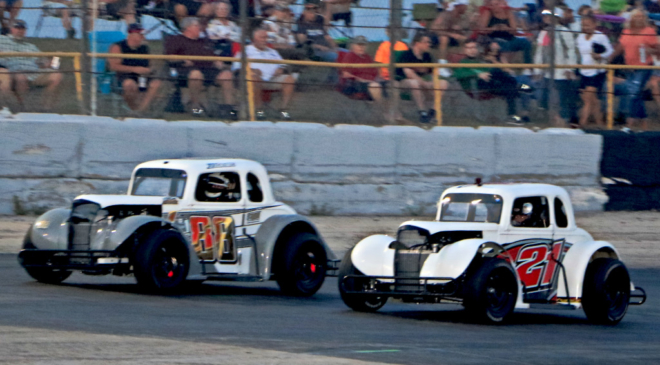 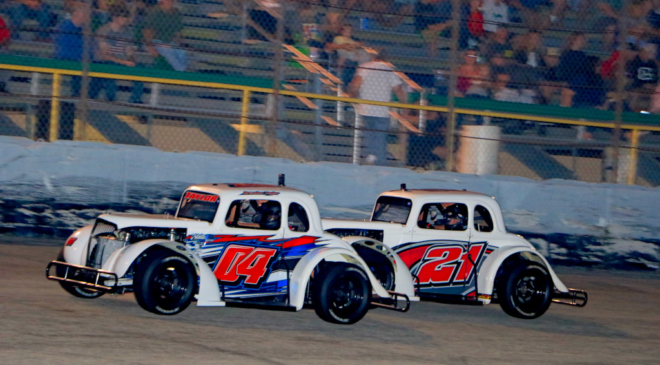 Racing Recoil Clip of the week: 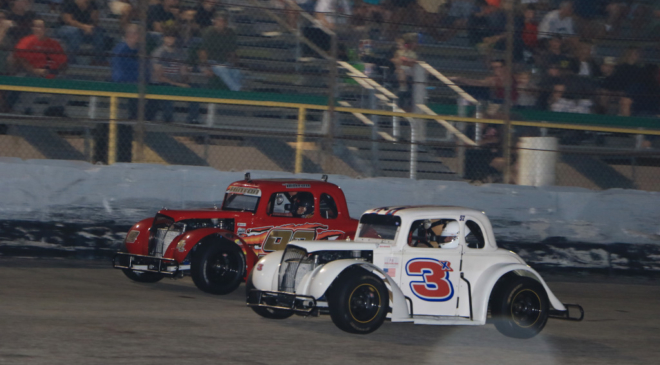 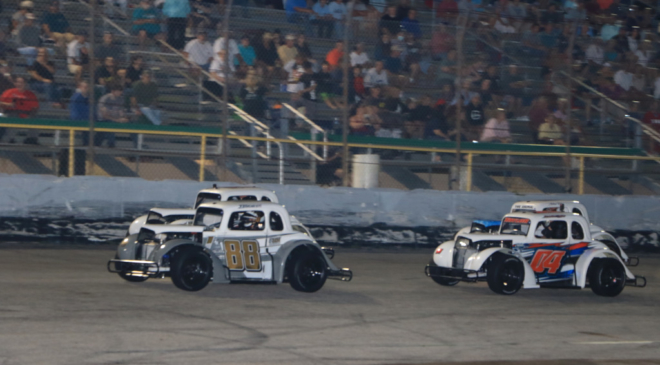 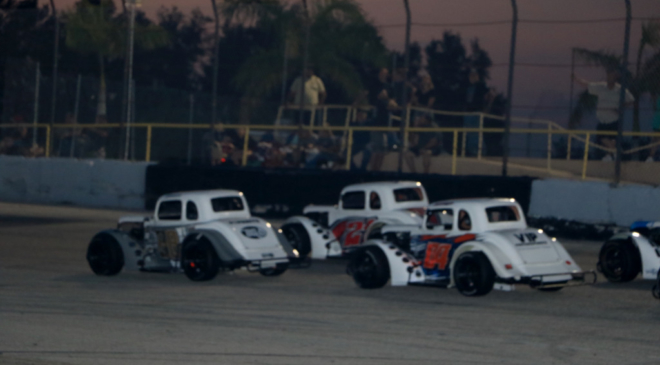 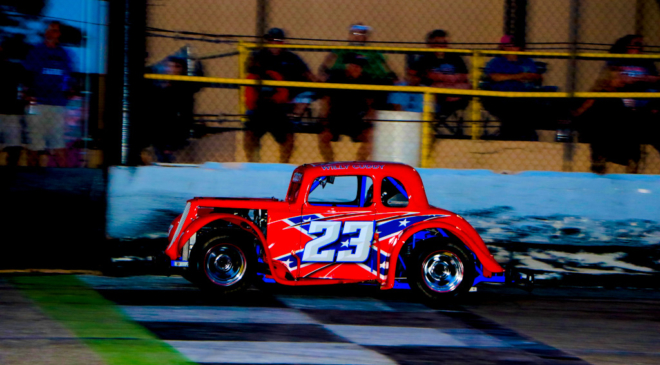 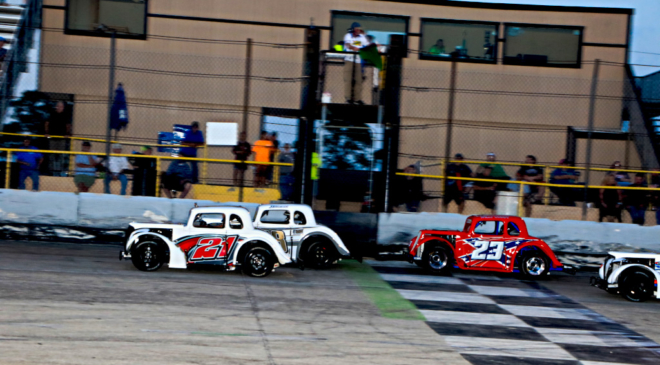 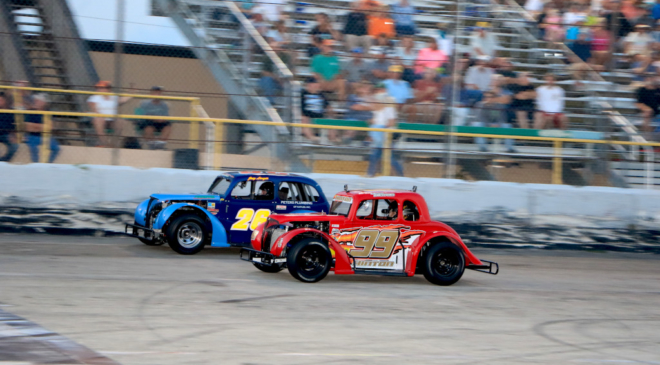 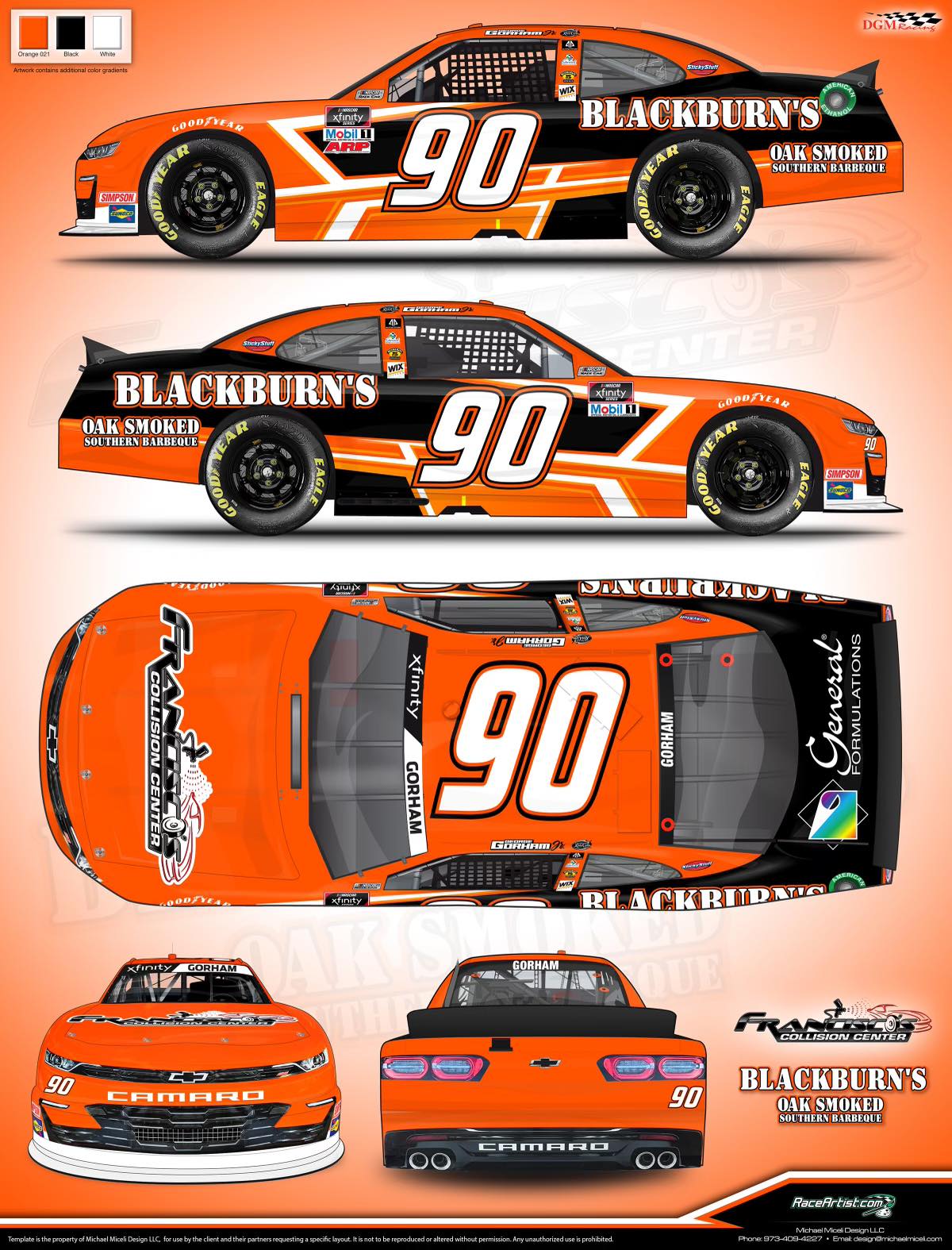 That’s right this Friday night in Martinsville, VA. George Gorham Jr. Is going to make his NASCAR Debut in the DGM Racing #90 with the Sponsorship of Blackburn’s BBQ Oak smoked and Fransisco’s Collision Center.  George Gorham has had this dream since he was a young kid.  Finally! A dream of mine since I was a kid awaits me! said Gorham.  He is a driver that will drive and compete competitively in any class around the state and has quite a resume of wins and several Super Late Model Championships. 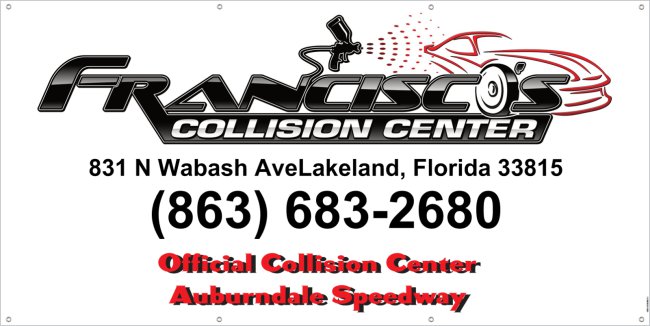 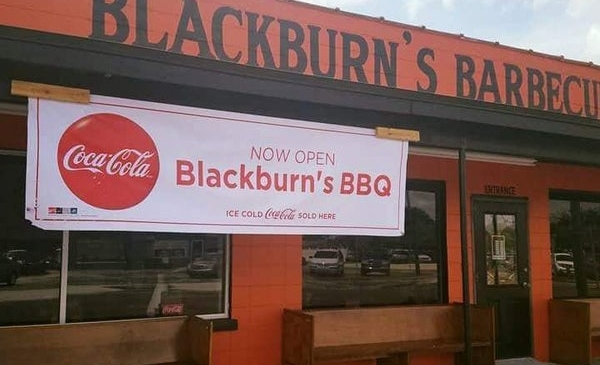 As an example Gorham race last weekend in a pure stock at Auburndale Speedway right in his hometown, this weekend he will compete with the big dogs on the Nascar Xfinity Series, and next weekend he will be back competing on the local level at 4-17 Southern Speedway in the 5k to win Keep trucking 100. 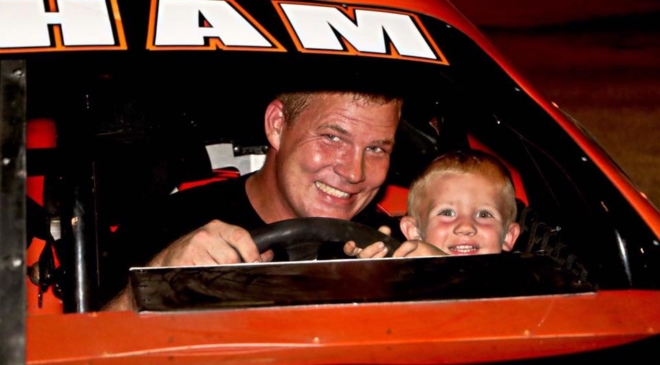 George is beyond grateful of the support of his Family which supports him at every race and on and at local tracks, they are his pit crew, all the way down to his youngest son Macon.  DGM Racing has given hm to drive the 90  Nascar Xfinity after George got his NASCAR license earlier this year. 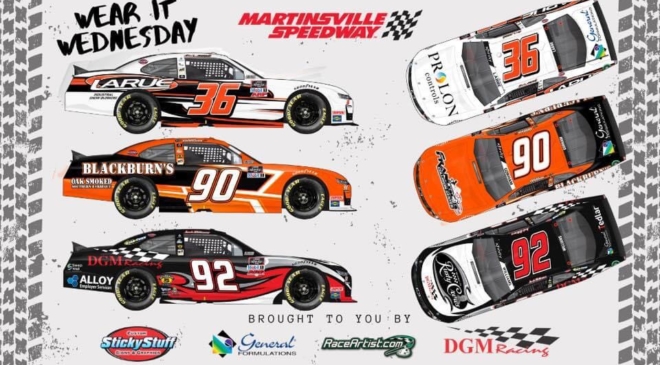 What Stays the same from the short tracks to the big stage are the local supporters and sponsors that have stepped up to make his dream a reality.

From all of us at Sunshine State racing and Most Everyone in Florida (LOL) we will be rooting for you this Friday night under the lights!!!!!!!!!!!!!!!! 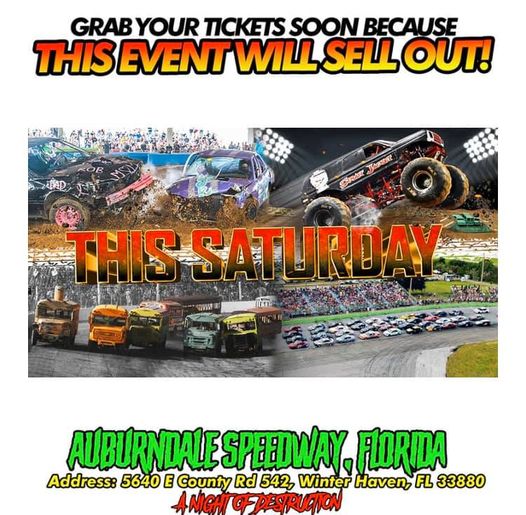 If you want a break from the normal Saturday night short track, go see one of these Night of Destruction Shows, you’ll be glad you did. Great entertainment for the whole family, get there early, it fills up fast!!!

to trade some paint
on the race track this weekend!

Story and Photos From Dave Sink and Pavement Pounders:

April 3, 2021 – Auburndale, Florida – Troy DeCaire won the inaugural “Dave Westerman Memorial” Saturday night at Auburndale Speedway to give him his fourth consecutive BG Southern Sprint Car Shootout Series victory and fifth win overall in a young 2021 season.
Unlike his four previous SSSS wins this season, his most recent win was anything but a cake walk and sent DeCaire on a roller coaster ride beginning early in the day.
While running third in his heat race, his car come to an abrupt stop exiting turn four on lap seven. DeCaire quickly bailed out of his mount grimacing in pain. An apparent u-joint broke, and-in-the process smashed his right foot. A few short minutes later DeCaire could be found in his pit area walking with a limp and an ice bag over his foot. He was helping his crew thrash to get the repairs done in time for the feature.
As the final car pushed off for the 40-lap feature, it did not appear DeCaire would present himself in time for the feature event. But DeCaire miraculously appeared at the entrance to the track just as the filed paraded around the speedway.
When the green flag waved on the event Travis Bliemeister lead the first three circuits before surrendering the lead to Sport Allen. Meanwhile DeCaire had quickly worked himself into the fourth position by lap ten and set sail for the leaders. By lad eighteen DeCaire had caught race leader Allen in lapped traffic. Over the next ten laps the duo would weave in and out of lapped traffic while trading the lead multiple times. At times, the battle for the lead would include three and four-wide racing. By lap thirty-four, DeCaire had sealed his claim on the point and raced the rest of the way to victory.
“It’s been a long time since I’ve had a u-joint explode” explained DeCaire after the race,” Thank God it wasn’t at a big track but a little one like this. It came apart and slapped me on the foot. My big toes purple and I lost a toenail. I’m proud of my guys for getting this thing back together. We had to borrow parts off a few other teams. I love running with Sport (Allen). We were in there throwing hay makers at each other and that was a lot of fun”. concluded DeCaire.
With Saturday’s win, Decaire becomes the first driver to collect five sprint car feature victories in 2021, dirt or pavement.
DAVE WESTERMAN MEMORIAL 40-LAP RESULTS
1. Troy DeCaire (36)
2. Sport Allen (88a)
3. Joey Aguilar (11)
4. Mickey Kempgens (5s)
5. LJ Grimm (88)
6. Gary Wiggins (44)
7. Travis Bliemeister (3)
8. Bruce Brantley (25)
9. Bo Hartley (3x)
10. Francis Crowder (77)
11. Bill Pettijohn (9)
12. Daniel Miller (00)
13. Dude Teate (0)
DNS Tommy Nichols (55)
Tweet
By Robert Howell|2021-04-06T22:59:05+00:00April 6th, 2021|Front Page News, Racing News|Comments Off on DECAIRE TAKES WESTERMAN MEMORIAL; WIN STREAK NOW AT FIVE
Read More 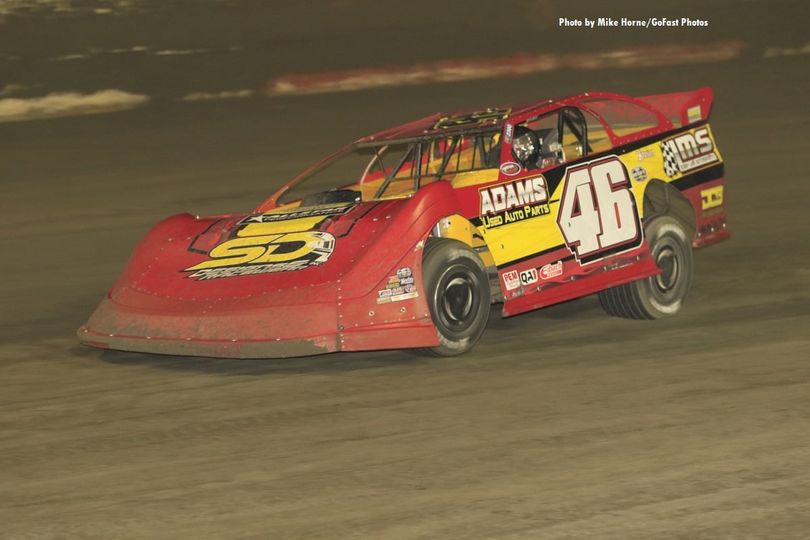 Jeff Mathews prevailed in the 50-lap main for the 604 Late Models in honor of legendary racer Donnie Tanner and then jumped into his Modified and captured a 15-lap main event, dominating both events.

The 21-car Late Model event started with Phillip Cobb as the early leader. Travis Varnadore was able to grab second from John Norris on the second lap and stay near the leader. Mathews made his pass to grab second on lap 9 and backed it up with a move to take the lead. With the green flag staying out, Mathews was able to build up a straightaway lead. Five laps later, the lead was half the track as Mathews had lapped up to the 10th spot. Jesse Brown was about to take second on lap 23 when his car slowed in turn three and Brown retired from the event. The caution flag wiped out Mathews’ big lead, but on each subsequent restart, Mathews could not be caught. Cobb, Varnadore and Doug Horton won preliminaries.

After a brief respite in Victory Lane, Mathews dashed to his Modified in the infield and picked up right where he left off. He moved into the lead in the early going and rolled to a win for a return to Victory Lane in back-to-back races. Mathews and Tyler Clem had earned heat wins.

Garrett Green captured the Q Auto & Injury Medical Malpractice, taking the early race lead. The race was red flagged when Steve Diamond and Keith Butler made contact, sending Butler into a flip. The driver was okay, but both were eliminated from the competition. For Green, it ends a yearlong dry spell since his last visit to East Bay’s Victory Lane. Green had earlier won his heat as did Andy Cobb.

Bruce Comer was absent for the first night of competition in the Q Mini Sprints, but his car was in Victory Lane thanks to Robby Hoffmann. Come knew the pressure was on, winning his heat and backing it up with a strong run to victory in the 15-lap main. Dallas Casey opened the night with his first heat win of 2021.

The Gladiators turned up in support of the first Mama Kathy Memorial, an event in honor of a top supporter of racing and the Gladiator class who passed away in 2020. Heat wins were taken by Baily Purcell, Rodney Martin and D.J. Taylor, with Taylor making his first racing start in three years. If there was any rust on Taylor, it was gone by the time the feature rolled around. Taylor powered from third to first on the 10th lap to score the feature win.

East Bay will be dark on April 10 with racing to resume on April 17. The Jody Robbins Memorial for V-8 Warriors will pay $400 to the winner with racing action in 604 Late Models, Modifieds, Mini Sprints, Mod Lites, Outlaw 4s and Florida Old Time Modifieds.

Florida’s best Sportsman take on the Watermelon Capital this weekend. 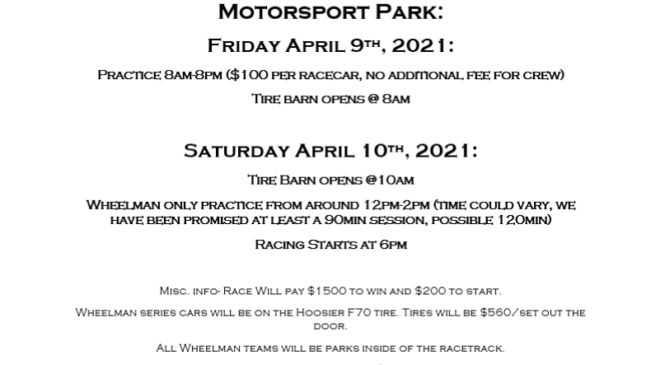 Its race week at Crisp MotorSports Park for round #2 of the 2021 Brandon Ford Wheelman Series! Drivers, if you haven’t registered yet, don’t forget you only have until Thursday at 2pm to be entered in for your chance to win a free tire! Registration is simple, just send us a message or give us a call @ 800-882-7231

Who win take win number 2 of the season??

Hello Sunshine State Racing fans and Followers. We are looking for a few new marketing partners for a few projects we want to look at getting underway.
We are looking for one to two companies that would want to help us upgrade the message board on Karnac. The old board is out dated and we can not even comment on it as a group anymore. With this we want to give you all a great forum to talk racing and about your coming events. Also bring a great new classifieds page to you the racers.
Second we would like to add a wireless device to our camera system that would allow us to do live in broadcast pit reports and we could give people updates on the racers in the pits as wrecks and things happen and get the drivers point of view as they happen. We are looking for a company or two to help with this.
You would get your company name on the interviews or on message board.
If you are interested or know anyone that might be please message us here or one of us directly amd we can give you details. We also always have broadcast advertising and marketing available anytime.
We thank you for all your support and we try to keep stepping up our game for you the fans and racers.
Team SSR
Email:Robert@Karnac.com or Jennifer@karnac.com
Phone: 863-990-3564
Tweet
By Robert Howell|2021-04-05T22:19:17+00:00April 5th, 2021|Front Page News, Racing News|Comments Off on Marketing Partners Wanted
Read More
Previous234Next