Speed51.com – Showtime Speedway in Pinellas Park, Florida brought in the best racers from around the state to put on one heck of a show Saturday night with the $5,000-to-win Florida State Super Late Model Championship 100.

With big names such as Florida short track ace Jesse Dutilly, young gun Michael Atwell and super team Mike Cope Racing in town, it was Aaron Williamson in only his third ever start in a Super Late Model who took the win.

Williamson, who had gotten the call up to substitute for the injured Colin Allman on Thursday night, had been driving for owner Chad Allman for most of the year in the team’s Sportsman car.

300×250 Seekonk Speedway PPV 2017.07.12“Colin called me about seven o’clock on Thursday night to come change the seat and drive it,” Williamson told Speed51.com powered by JEGS in a post-race interview.

“It was incredible. I can’t thank everyone who supports us enough. Jesse, of course, has a dominant car wherever he goes. It’s unbelievable to beat him, let alone pass him on the outside. I cannot believe how the season has come with the Sportsman car and now the Super Late Model here for a race. I’m shaking I’m so excited. It’s great.”

When pressed to find out how he got around Dutilly on the outside for the win with only a handful of laps to go, Williamson simply said, “I had a good coach on the radio”.

The one on the other end of the radio was none other that Colin Allman himself.

“Colin supported me for my decision to step to the outside of him from the first turn and told me to keep digging, keep digging, that we were going to get him, and sure enough we did.”

Jesse Dutilly chalks up his second-place finish to handling issues his team had been struggling with all weekend.

Devon McLeod came in third with a car that more resembled a Florida Modified than a Super Late Model in the closing laps.

“The car was great. It was awesome, and then I just got caught up in someone else’s mess,” he said. “It was tough keeping these things down in the bumps. It’s such a small track you don’t think downforce means much, but when you have to hit the gas and the brake so much to get the car to roll through the center, I think if we had a nose on the car it would have been a good three-car race or they would have been chasing us. The car was that good.”

More information, highlights, and interviews from Saturday night’s race at Showtime Speedway can be seen by visiting 51’s Trackside Now.

Next on the schedule at Showtime Speedway is the Racecar Engineering Wheel Man Sportsman Series 50 with support from the Pro Trucks, Mod Minis, Mini Stocks, Strictly Stocks and Street Stock divisions on July 15.

Lakeland, FL (June 19, 2017) Mother Nature had postponed racing in the Brandon Ford Wheel Man Series for nearly 2 months, so when drivers and teams began rolling into Showtime Speedway this past Saturday, there was a feeling that racing might be challenging for the 50-lap feature event at the tough quarter-mile bullring in Clearwater, FL.

The most recent Series winner, Jesse Henley, continued his momentum by setting fast time and winning the QA1 Fast Qualifier Award, but unfortunately suffered engine issues during the race which relegated him to a 17th place finish.

Chris Lewellen started back in the 13th spot, but was able to work his way through serious traffic for a 5th place finish. Brooke Storer started just behind Lewellen and followed him through the field to finish 4th.

Series points leader Aaron Williamson showed nerves of steel as he was tested from all sides. Despite being knocked out of the racing groove a couple of times, Williamson showed his focus, determination and professionalism to bring home a well-deserved 3rd place finish.

Travis Roland provided the Showtime Speedway fans with some of the best driving of the season after he was sent to the rear of the field for a restart violation early in the race. Roland methodically weaved through tight traffic and by lap 30, slotted into the 2nd spot and held on for his best finish of the year. Roland was awarded the Sweet Steering “Sweet Move of the Race” for his effort.

Devin McLeod knew he had a strong car, just missing the pole by .002 seconds, and after the inversion, rolled off 9th on the grid. McLeod had his share of issues to deal with as well. After being caught up in an early incident, he dealt with suspension problems throughout the 50-lap event, but despite the difficulties, drove the #5 Underground Utilities Chevrolet to his 2nd victory of the Brandon Ford Wheel Man season.

The next event for the Brandon Ford Wheel Man Series is this Saturday at Citrus County Speedway. Pit gates will open at 2pm and practice will begin at 3:00.  Also on the schedule are Pure Stocks, Outlaw Street Stocks, Mini-Stocks and the always popular Demolition Derby.

For more information about the Brandon Ford Wheel Man Sportsman Series, find us on our Facebook page @WheelManSeries. 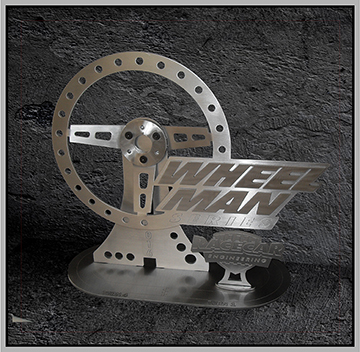 akeland, FL (May 9, 2016) – Racecar Engineering would like to remind and invite all Sportsman teams about the 2nd event of the Wheel Man Series on May 28th at Showtime Speedway. Round 1 was an exciting show featuring top drivers such as Sean Bass, Jason Rendell, Brooke Storer, Colin Allman and more, but eventually it was George Gorham parking his #03 Parker Line Striping Chevrolet in Victory Lane. Gorham was also the 1st recipient of the newly designed and prestigious Wheel Man trophy.
Drivers, teams and fans will be updated throughout the weeks preceding the May 28th event for additional promotions and awards that will be added to the purse. Further announcements regarding the series will be issued in the very near future.