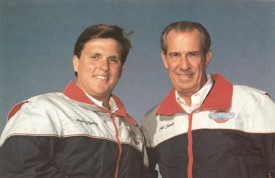 Byrnes enjoyed a successful and highly respected television broadcasting career for 30 years.  He joined the FOX Sports family in 2001, hosting and reporting for multiple NASCAR programs and serving as a pit road reporter for NASCAR on FOX’s broadcast of NASCAR Sprint Cup Series races from 2001-2014. Most recently, he was the play-by-play announcer for FOX Sports 1 in the NASCAR Camping World Truck Series, and was co-host of NASCAR Race Hub for the network.

Prior to joining FOX, Byrnes also hosted Darrell Waltrip’s Racers on TNN, worked as a pit road reporter for CBS, WTBS and TNN, and hosted a variety of NASCAR programs for The History Channel and TNN, for which he moved to Charlotte in 1985 and remained in the area ever since. His first on-air job was at WCIV-TV in Charleston, S.C., in 1982, after commencing his television career as weekend sports producer at WJLA-TV in Washington, D.C., immediately following graduation from college. Byrnes also called play-by-play for a Carolina Panthers/Minnesota Vikings NFL game on FOX and NASCAR Sprint Cup Series races for DirecTV Hot Pass.

Despite all his career accolades, Byrnes’s greatest accomplishment was his son, Bryson, who is growing into a more Godly, compassionate and respectable young man every day. Byrnes’s passion was spending every moment possible with Bryson, especially watching him play football and basketball and helping prepare him to play for the Charlotte Christian School football team as a seventh grader in the 2015-’16 school year.  The other light of his life was Karen, with whom his relationship extended well beyond that of a spouse.  The two were inseparable since meeting in 1988 while she was the public relations representative for Benny Parsons in his last season as a NASCAR driver.

Attending Appalachian State University football games was one of the family’s favorite activities, in addition to cheering for the University of Maryland’s football and basketball teams; the Washington Redskins; the Carolina Panthers; following NASCAR; and watching nephews Tyler and Dylan play baseball.  Byrnes also delighted in gardening, travel with his family, photographing sports, nature and sunsets.

In addition to being a wonderful, loving and Godly husband, father, son and brother, Byrnes was an excellent friend, colleague and mentor to all who knew and loved him.  His indelible impact extended even to the millions of television viewers who watched him every week over the years, as evidenced by the outpouring of public support he received following his cancer diagnosis in August 2013.

Byrnes became a tangible example of strength, courage and fortitude to all who witnessed his battle with cancer and his personal crusade to spend as many days as possible with Karen and Bryson.  He was honored to be designated as the keynote speaker at the American Cancer Society’s Relay for Life on June 7, 2014, in Charlotte, where he shared the inspiring story of his battle with hundreds of cancer survivors, caregivers and families during the Luminaria Ceremony that evening.

A public figure who always made time for others and made strangers feel like longtime and valued friends, Byrnes took particular solace in his private life with his family.  He was always smiling, supportive, selfless and loving. Upon his original diagnosis, Byrnes quickly found the positive in the situation and put his entire focus into his treatments, simultaneously vowing not to miss a single moment with his son.  His motto and daily inspiration became “be present” in every moment of his family’s lives.

“Steve was a person who had a real passion for his job and that’s what made him stand out as one the best at what he did. He was always humble too, and I never saw him treat anyone unfairly. That’s just how he did his job and lived his life. He always treated myself, our family and our race teams with great respect and I admired him for that. He will be missed by many and our families thoughts and prayers are with Karen, Bryson and the rest of his family,” NASCAR legend Richard Petty said.

“It is with tremendous difficulty and deep personal sadness that FOX Sports acknowledges the passing of longtime FOX NASCAR broadcaster, Steve Byrnes, after a lengthy battle with cancer.

A symbol of strength, compassion and dignity, Steve, 56, was a source of inspiration to everyone, sharing his fight in a very courageous and public way. Honored just days ago at Bristol (Tenn.) Motor Speedway with the Food City 500 In Support of Steve Byrnes And Stand Up To Cancer, race fans, race teams, NASCAR and track officials, co-workers, friends and family came together to surround him with a remarkable display of love and respect.

A shining example of husband, father, friend and consummate professional, Steve Byrnes will forever be remembered as one of the good guys – his time with us cherished and appreciated.”

“NASCAR extends its condolences to the many friends, FOX Sports colleagues and family of Steve Byrnes. Whether you had the privilege of knowing him or if you watched him on television for the last three decades, Steve’s work ethic and authenticity made him a beloved individual inside and outside the garage.

“His level of professionalism was matched only by the warmth he showed everyone he met. He battled cancer with tenacity, and was a true inspiration to everyone in the NASCAR family. Simply stated, we’ll miss Steve dearly. Our thoughts are especially with his wife Karen and son Bryson during this difficult time.”

Twenty-first Century FOX Senior Executive Vice President David Hill added, ““From the very beginning of NASCAR on FOX, Steve Byrnes was one of the linchpins of the broadcast team. His passion for the sport – his passion for everyone involved with the sport – shone through week in and week out. But even more than that, Steve was defined by his journalistic integrity and kindness; his ability to communicate everything from complex technical issues to the highly emotive human dramas in this sport, where injury and or death are constantly just one mistake away.

“The consummate television professional, he established himself as a star on SPEED Channel, where viewers simply loved his knowledge, his sense of humor and his easygoing nature, becoming the Mr. Rogers of NASCAR – a warm voice everyone trusted. Even more impressive, and fully on display last weekend in Bristol, Steve was loved and respected by the entire NASCAR community, from the drivers to the team owners to the front office executives. I am devastated by his passing – he was not only a trusted and gifted colleague, but a mate – my heart goes out to Karen and Bryson.”