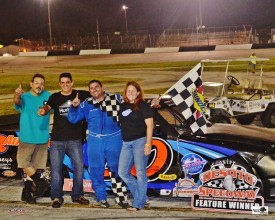 After taking a wire-to-wire victory in Saturday night’s 25-lap Sunoco Racing Fuels Pro Late Model feature at Desoto Speedway, Chad Chastain was looking to sweep the night’s main events with a victory in the 50-lap Q Auto & Injury Attorney Pro Truck feature.
Chastain came within three laps of pulling off the double, but it was a dramatic pass by defending track champion Danny Anderson of Bradenton with three laps to go that spoiled Chastain’s party and saw Anderson parking in Desoto’s winner’s circle for the second time this season.
Polesitter Scott Hogan grabbed the early lead and was pulling away from Danny Anderson and Chad Chastain, who moved up to third from his fifth starting spot on the first lap. The leaders caught lapped traffic on lap 12, allowing Anderson and Chastain to close right on Hogan’s tail.
Two laps later the leaders were caught behind James Dellea III and Robert St. John, who were battling for position at the tail end of the lead lap. Chastain used the slower trucks as a pick to pass both Anderson and Hogan to take the lead.
Immediately after Chastain grabbed the lead, Dellea and St. John got together in the first turn and collected Hogan, bringing his night to a premature end after just 16 laps.
Chastain held on to the lead on the restart with Anderson and Steve Darvalics close behind. Darvalics would eventually get around Anderson for second with 15 laps to go and was able to close right on Chastain’s tail thanks to Dallea’s spin coming out of the fourth turn on lap 38.
After several attempts at a restart that involved crashes and spins, Darvalics would be forced to pull into the pits with an apparent oil leak – which may have have led to the carnage on the restarts.
Chastain, who spun his tires several times on the restart attempts, fought off several challenges Anderson after the final restart. With three laps to go Anderson dove under Chastain going into the third turn, going all the way to the flat of the race track to take the lead.
Anderson made the pass stick and was able to go on to the victory.
“That last caution really helped us, Anderson said. “I can’t say enough about Chad. He’s come a long way and he got by me early in the race. I didn’t think I had anything for him because we were really loose. The truck really came in over those last 12 laps.”
Cody McDuffie finished third behind Chastain. Sean Lemaster and Jeff Firestine rounded out the top five.
Saturday night’s 25-lap Modified Mini feature was a three-car battle between Darrin Ellis, Tom Zimmerman and Lee Davis. Ellis grabbed the lead from Ronnie Brock Jr. at the end of the second lap and brought Zimmerman and Davis with him to the front.
While Ellis was pacing the field, Zimmerman and Davis ran side-by-side for the second spot for nearly half the race directly behind Ellis. Zimmerman cleared Davis and made several attempts to grab the lead from Ellis in the closing laps, but his car broke loose in turn four with about three laps to go.
Zimmerman’s slip gave Ellis the cushion he needed to pull ahead and take the victory in just his second start of the year. Zimmerman held off a last-ditch challenge from Davis and finished second.
In other action Saturday night, James Nanney won the 25-lap Take Aim Gun Range Street Stock feature;
Kyle Best won the LKQ Pick Your Part Pure Stock feature; and Mike Gamache won the 25-lap School Bus Figure 8.
Desoto Speedway will be closed next week April 25th for the Bradenton Parade.
Racing resumes on May 2 with the J.D. Byrider Open Wheel Modifieds, Street Stocks, Modified Minis, Bombers, Legends and Mini Stocks highlighting the action.