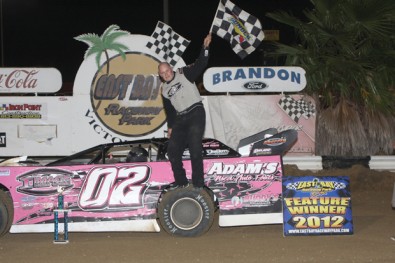 October 27, 2012 – Tampa, FL – It was Trick or Treat for the kids 12 & under and Breast Cancer Awareness Night here at East Bay Raceway Park. The third and final race for the 50 Lap Donnie Tanner Memorial Series for the Late Models, Gagel’s Open Wheel Modifeds, the Old Time Mods and the Motorstats.com 4 Cylinder Bombers were all in action tonight.

The first feature of the night went to Gagel’s Open Wheel Modifieds. Thomas Pratt, Kyle Bronson and Austin Sanders won their heat races. For the feature event it was Powers and Jeff Mathews on the front row. Mathews led the first five laps until tangling with lap traffic of Dakotah Stephens. Mathews broke a shock and never returned. That handed the lead over to Powers and led the entire race picking up his second feature win of the season. Point’s leader David Pollen, Jr. finished second while Sanders, Bronson and Pratt rounded out the top five.

Next up were the Old Time Mods. When the green flag dropped, several cars were battling for the top spot, but it was Jamie Frankland taking over on lap three and never looking back. Roger Herbach finished second, while Bob Fink, Gary Riccio and Mark Steve rounded out the top five.

The Late Models were next for their 50 lap feature event. Winning their heat races were Josh Peacock, Doug Horton, and driving a late model for the first time and picking up his heat win was Kyle Bronson. So for the feature it was last week’s feature winner Keith Nosbisch and Jeff Mathews on the front row. This was Nosbisch’s first race for the Donnie Tanner Memorial as he tuned his car up last week and won the feature, looking to make it two in a row. When the green dropped, it was Nosbisch leading the field into one, but on the very next lap, Steven Mathis, Jr. slowed and brought out the first caution of the night. On lap eight, Jack Nosbisch Jr. spun in turn four collecting several cars which included the points leader for the series John Koller and Mathews. Nosbisch, Jr. was not able to continue, but Mathews and Koller were. On lap twenty five, Roger Crouse and Mathis, Jr. spun in turn four bringing out the next caution. Nosbisch was holding on to a comfortable lead until that caution came out.  Another caution came out a few laps later for debris on the backstretch and tightened the field back up once again.  On the restart on lap thirty eight, several cars got together going into turn one bringing out the red flag.  The field was once again under way on lap thirty eight, but on lap forty, Horton slowed bringing out another caution with just ten laps remaining. When the checkered flag waved, it was Keith Nosbich picking up back to back wins and winning his first Donnie Tanner Memorial Race. “Donnie was a great friend and a great competitor throughout the years and was a great business man as well. It’s a great feeling to win one of these” Nosbisch stated in Victory Lane. Finishing second after starting from the twelfth spot and charging up was Mavrick Varnadore. Mathews finished third while Peacock and Dave Schmauss rounded out the top five. Winning the Donnie Tanner Series with just a ten point advantage going into the final race and winning by seven points was John Koller of Grand Island, FL.” We work hard each every week on the car with just myself and John” his wife Julie stated after finding out they had won the points.

The final event of the night went to the Motorstats.com 4 Cylinder Bombers. Robert Kissam, Patrick Fiore, Sr. and William Burnside won their heat races.  On the front row it was Patrick Tabb and Robert Kissam for the feature event. Tabb took off from the start and Kissam followed him lap after lap for thirteen laps until the only caution came out on lap thirteen with George Handy and Raymond Rogers, Jr. both stopping on the track in different spots. With just two laps to go, Tabb crossed the line first with Kissam second, John Moore third, Troy Dittebrand and Raymond Vann rounding out the top five. Vann started twenty third. But, after going thru tech, Tabb was deemed illegal for not having a working brake light. So that handed the win to Kissam with Kayla Jones moving into the fifth spot.

ASA Racing continues next week as the Late Models return with the East Bay Sprints, Street Stocks and the Motorstats.com 4 Cylinder Bombers.  For further information, log on to www.eastbayracewaypark.com or call 813-677-7223 for more information.