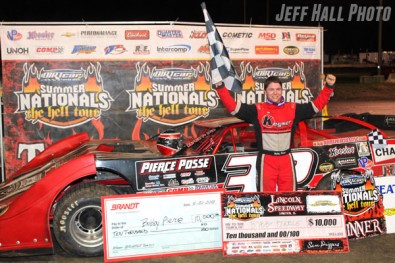 LINCOLN, Ill. — June 30, 2013 — Bobby Pierce is only 16 years old but he accomplished a feat on Sundaynight at Lincoln Speedway that many in Dirt Late Model racing only dream about — winning a DIRTcar Summer Nationals event.

Pierce, of Oakwood, Ill., captured the $10,000 victory in dominating fashion at quarter-mile Lincoln Speedway on the 12th night of the six-week DIRTcar Summer Nationals Hell Tour, becoming the youngest winner in the 26-year history of the grueling summer series.

Pierce lined up on the outside of points leader Brandon Sheppard on the front row for the 60-lap feature, but it was three-time series champion Shannon Babb who charged from sixth to lead the 22-car field in the early going. Pierce caught and passed Babb on lap 9 then held off 2004 series champion Don O’Neal to the checkered flag.

“We’ve been trying so hard to do this, getting top-fives and coming close,” said Pierce, whose father, Bob, is a two-time DIRTcar Summer Nationals champion (1992, 1995). “It’s so hard to win these things. You’ve got the best of the best. I’m so glad to finally get one. It’s amazing.”

(Click here for news and information on the DIRTcar Summer Nationals.)