Duke Fights Off Challengers for Brighthouse Challenge Win at Desoto 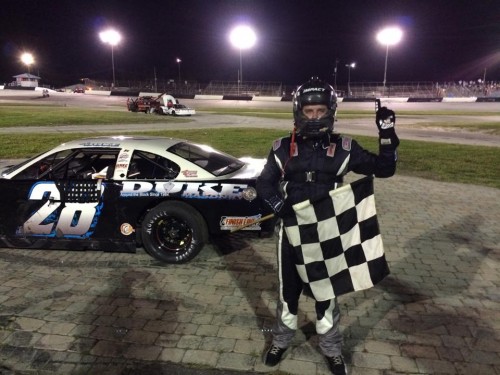 COTT LOCKWOOD, Desoto Speedway – On a night where he said his car wasn't even close to being perfect, T.J. Duke held off a series of challenges and led the final 62 laps of Saturday night's 100-lap Brighthouse Challenge Series feature event at Desoto Speedway.
Polesitter Anthony Sergi led the first 16 laps before being passed on a restart by George Gorham. Gorham would face a challenge from both Jesse Dutilly and Chris Fontaine, even getting tagged in the rear bumper several times by both drivers
Fontaine passed Gorham on the outside for the lead coming out of turn four and quickly stretched his lead before a debris caution on lap 31. Dutilly got to second on the restart, but a flat tire would send him to the rear of the field
Duke worked his way up to second and passed Fontaine for the lead lap 38. He would pace the field for the next several laps with Fontaine directly on his tail. Duke started inching away from Fontaine until the caution flew for third-place running Billy Bigley stopping in turn four.
Jeff Scofield, winner of a super late model event at Desoto last month, moved up to third on a lap 63 restart. Over the next 20 laps, Duke fought off several challenges from Fontaine and started stretching his lead before the caution came out again for Bigley's spin off turn four.
On another restart with nine laps to go, Duke and Fontaine ran side-by-side for a couple of laps before Duke finally got the edge. Duke would go unchallenged the rest of the way.
"I wouldn't say we were on a rail because we were actually a little bit off," Duke said in victory lane. "We expected to be a little bit better and I don't like winning races this way. I'd rather drive away from the field. This was a good experience and next time we come back we'll be better."
Fontaine, who said he was running about three-quarter throttle in an effort to save his tires for one last run at Duke, held off a late challenge from Scofield for second. Dutilly rallied to finish fourth, nipping Joe Boyd at the finish line.
In other action Saturday night, Joe Sumansky won the 25-lap Pure Stock feature; Jessica Ostrovskis won the Mini Stock feature; John Sarppraicone Jr. took the 30-lap Street Stock feature; Randy Johnson won the Pro 4 feature; Bradenton's Jordan Miller won the Rookie 4 feature and Palmetto's Billy Carlbert won the Mini Stock Figure 8.
Desoto Speedway is closed next weekend and will return to action on May 24.