Saturday night at Auburndale Speedway Bubba (Roy) Healey gained a new fan and a lot of respect. During the autograph session drivers were matched up with young fans and if that driver won they got $100 and a bike. Well Saturday night is the night that Matthew would become Bubba’s Biggest fan as he was matched with him for the race.

After the race Matthew and his family had the chance to go through the pits and got to talk and meet Bubba. That is where the two became friends and Bubba made a fan for life.

Thank You Bubba for being a great racer and all around guy. 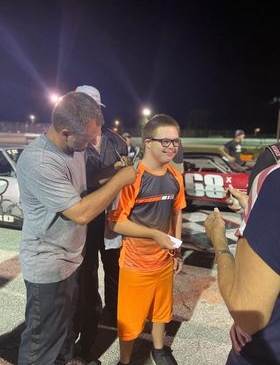 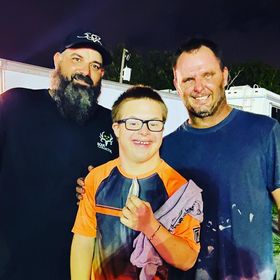 Story below is from Mathews dad.

#2 Bubba Healey!!
Heck of a guy…
Our son Matthew was at his first race Saturday night at Auburndale Speedway.
Matthew is 15 and has Down Syndrome. They invited him and other kids on to the track before the pure stock feature, the kids got paired with a driver.
If their driver won…the track would give them $100 and a bike!
That in itself is pretty awesome.
Well Matthew got paired up with #2 …He ?went back up to the stands and with his two younger brothers and cheered their hearts out for #2
While in the stands we meet another driver… Jason Swilley #101 modified driver. He talked to me and the boys for a little while, gave the boys autographed pictures of him and his car and invited them down to the pits after the race to sit in his car.??
After that we got the chance to meet Bubba Healey, who proceeded to send his wife to his truck to get his wallet. To say I was surprised is an understatement. When she got back with his wallet he pulled out $100 bill and gave it to Matthew and said “we may not have won tonight but you’re a winner.”
I was in shock…
It wasnt about the money as much as the good deed!
True..pure …heartfelt and real.
So a big thank you to two drivers that not only showed the love of their sport but humbling humility and care for others.
They Made our 2020!
Anyone that knows these two guys go shake their hand and tell them you appreciate them we sure do.
I encourage anyone out there that has the financial ability to sponsor these gentlemen …you could not find better ambassadors to your sport.?
God Bless you all and thank you Auburndale Speedway