BATAVIA, OH (July 11, 2017) – The Lucas Oil Late Model Dirt Series, in conjunction with Golden Isles Speedway, are pleased to announce the dates for the 2018 Super Bowl of Racing.

The annual tradition to kick off the Lucas Oil Late Model Dirt Series season will take place one-week earlier in 2018. The Super Bowl of Racing will begin with an open practice on Thursday, February 1st, followed by two action-packed nights of racing on Friday-Saturday, February 2nd-3rd.

The weekend is sure to provide exciting, door-to-door racing action, lap after lap, as the stars of the Lucas Oil Late Model Dirt Series battle a strong contingent of local and regional standouts. The 2017 Super Bowl of Racing saw a talented field of fifty-two entries – with Brandon Overton and Josh Richards scoring early-season victories.

Golden Isles Speedway recently ended their 2017 season to begin scheduled improvements in anticipation of the 2018 season. The 4/10-mile oval will undergo numerous improvements throughout the off-season, including a new clay track surface and raising the height of the frontstretch wall. 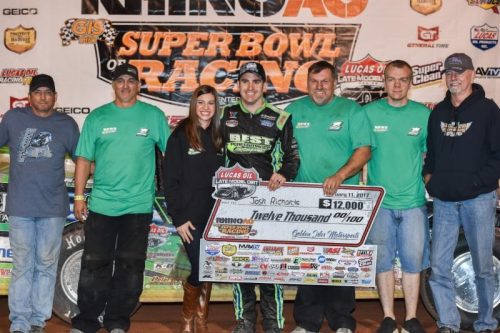 Rebounding from the previous night – where Richards had started on the front row, but faded to sixth at the finishn- he was elated for a better outcome. “I made an adjustment that I didn’t realize I had made last night and it definitely cost us. I was kicking myself afterward because I had done it by accident. We’ve really had a good car all weekend, I’m glad that I didn’t make the same mistake tonight. I can’t thank these guys enough for having faith in me!” END_OF_DOCUMENT_TOKEN_TO_BE_REPLACED

(August 27, 2016) – The stars may not have littered the sky on a cloud-covered evening. But the stars of the NeSmith Performance Street Stocks shined brightly Saturday evening at Golden Isles Speedway. None was more vivid then Brian Wooten. The B-dub Express topped a stellar field from three states to win the Super Challenge 5 Series 25-lap feature. He led every circuit on the 4/10-mile, red gumbo clay oval.

“Car did pretty good,” Wooten said of his $2,000 win. “Track was a little off this week. I’m not used to the track being this wet. I don’t like it this wet so I have a little homework to do, but it worked out tonight.”

Rain fell during the day three different times leaving a tacky surface throughout the program. That did not stop Wooten shooting from the pole and then opening the advantage again after a handful of restarts. The regular GIS high flyers were in the house as well as the aces from elsewhere. Richie Stephens, Kyle Livingood, Robert Hicks and Ronnie Newsome rounded out the top five. Justin McRee, Woodstock, Ala., jumped into the Dunn Motorsports High Roller Race Cars house car. The Late Model veteran won his heat, but went backwards some in the main and took seventh.

“They are the best of the best,” Wooten added. “Richie has helped me a tremendous amount and to have Justin start beside me and beat him tonight is just unreal.” END_OF_DOCUMENT_TOKEN_TO_BE_REPLACED 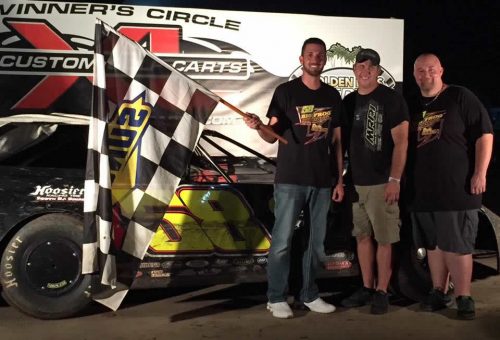 Devin Dixon and the Big Frog Motorsports team made the trek to Golden Isles Speedway (Brunswick, Georgia) on Saturday night to compete in the I-95 Toyota Late Model Challenge Series sanctioned event. Earning a front-row starting position for the feature via preliminary events, Dixon battled his way through lapped traffic, reeling in his fourth victory of the season for the team. Devin picked up a $3,000 payday for his driving efforts with Mark Whitener, Rhett Carter, Donnie Chappell, and Hunter Peacock rounding out the Top 5.

“Golden Isles Speedway has been really good to me this season,” remarked Dixon. “I really enjoy driving for Big Frog Motorsports, and it’s great to be able to put their #58 in victory lane.” END_OF_DOCUMENT_TOKEN_TO_BE_REPLACED