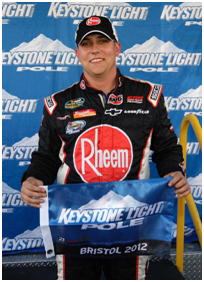 Cale Gale and the No. 33 Rheem team had a day full of ups and downs on Wednesday at Bristol (Tenn.) Motor Speedway (“World’s Fastest Half-Mile”).  The Sunoco Rookie of the Year contender nabbed his first NASCAR Camping World Truck Series (NCWTS) pole to lead the field to the green, but finished the race with a trip to the infield care center after making hard contact with the inside wall with just seven laps remaining.

With a fast truck, Gale paced most of the opening practice session and posted speeds inside the top 10 throughout final practice on Wednesday afternoon.  A few hours later, Gale strapped in the truck and ran a 15.656-second lap-his quickest of the day-to secure the pole position at the World’s Fastest Half-Mile.

Wednesday’s NCWTS event was the debut of a new track configuration at Bristol Motor Speedway where the upper groove was removed.  As a result, passing became more challenging than it had been in years past.  Gale decided to lead the field to the green from the outside line, but when the No. 17 truck got a good jump off the start, Gale quickly settled into the second position.

A long green-flag run kicked off the UNOH 200 and there was little movement inside the top-five competitors throughout the opening 80 laps.  A caution on lap 82 finally gave the field a chance to mix it up.  Well inside their fuel window to make it the distance, everyone came down pit road.  Gale called into the crew to report that his truck was a little snug when he was racing by himself, but got a little loose when racing around other competitors.  Still overall pleased with the handling of the Rheem Chevrolet, the team opted to service Gale’s truck with four tires, fuel and no adjustments before sending him back on the track.

As the laps wound down, tempers started to heat up and cautions became more and more frequent.  Gale was involved in an incident on lap 161 as a result of hard side-by-side racing, but was able to drive away with just minor damage to the rear bumper of the Rheem Chevrolet.  Gale stayed in the hunt racing inside the top five before briefly dropping to the sixth position on the lap 170 restart.

With just seven laps to go, the No. 29 of Brad Keselowski sputtered on fuel in front of the field while running second.  Gale, who was running sixth, checked up to avoid contact with the truck in front of him, but got turned by the truck behind him.  The contact sent Gale hard into the inside wall and resulted in terminal damage to the right side of the No. 33 Rheem Chevrolet.  Gale climbed out of his Chevrolet and took the short ambulance ride to the infield care center.  Within minutes, Gale was released from the care center and credited with a 28th-place finish in the UNOH 200 at Bristol Motor Speedway.

“Today was a wild day,” commented Gale.  “I’m so proud of my Rheem team for all their hard work and getting the pole this afternoon; but I’m so disappointed in how everything ended tonight.  We’ve had such great trucks from Eddie Sharp Racing all season, but it just seems like we haven’t had any luck.  I can’t thank Jerry [Baxter, crew chief] and the guys enough for all their hard work and standing by me all season; we had a strong truck tonight and we were definitely coming for a top-five finish.  I feel like our team has really bonded and that we’re on the right track; hopefully we’ll be able to carry the momentum of the pole award and strong run into the race at Atlanta next week.”

The NCWTS will take on Atlanta Motor Speedway on Friday, August 31st.  Live coverage of the Jeff Foxworthy’s Grit Chips 200 will begin at 7:30 p.m. ET on SPEED, MRN Radio and Sirius XM NASCAR Radio, channel 90.  Final practice (1:00 p.m. ET) and qualifying (4:30 p.m. ET) from the 1.54-mile track will also be broadcast on Friday afternoon.  Fans can also visit www.teamesr.com, www.twitter.com/teamesr, or www.facebook.com/TeamESR for the latest news and updates about Cale Gale and the No. 33 Rheem Chevrolet Silverado team all week long
.