Tazewell, TN—June 2, 2017— Shane Clanton proved he is bad fast and fearless as the 31-degree banking at Tazewell Speedway didn’t hold him back from leading all 50-laps of the Ray Varner 50 in order to land his third Series win of the season.

“We were just buying our time waiting for the checker flag to come out,” said Clanton. “Our car has been working real good the past month and that just shows what hard work that Penske and Ronny Crooks, Aaron and Nick and all of them guys have done to get me back on top here.”

Clanton’s win broke the two-year streak of Tennessee top-guns overtaking the Outlaws at the third-mile but Jimmy Owens was looking to carry on the tradition. Owens landed fast-time and a heat win before unfortunately drawing a sixth place start in the feature. After steadily passing three cars, Owens passed Ricky Weiss on lap 40 for the second position. After an unsuccessful effort to reel in the lap-leader, Owens finished in second and Weiss rounded out the podium

“We had an awesome race car tonight the track just kind of locked down a little quicker than we needed it to,” said Owens. “I would’ve liked to see what we had for Shane there if we could’ve gotten to race a little more but he had a good car. He’s been good for a while so congratulations to Shane and his crew and I’m glad that we get to come home with a good second place finish.” END_OF_DOCUMENT_TOKEN_TO_BE_REPLACED

Out of this World: Mars wins at Lernerville’s Working Man 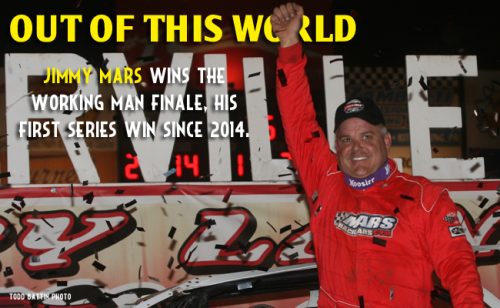 “It’s awesome to be back at Lernerville,” Mars said. “We don’t get to race as much as we want to right now. Things are going good, and I have so many people to thank. We have a lot of great people behind us. Everything worked great.”

Mars’ last World of Outlaws Craftsman® Late Model Series victory came on July 2014.  In a seven-caution spectacular, Mars fought a stout group of series regulars. Three-time Series Champion Josh Richards, who was seeking his record-breaking 18th win of the season, swiftly led the 24-car field in the beginning laps of the race from fourth.

Richards led 64 laps of the main event, while the rest of the top five relentlessly battled for a chance to take on the red-hot driver out of Shinnston, W.V. Early on, it was Mars. Mars maintained a half-second behind Richards for the first eight laps. Thereon, he funneled back to as far as fourth place. 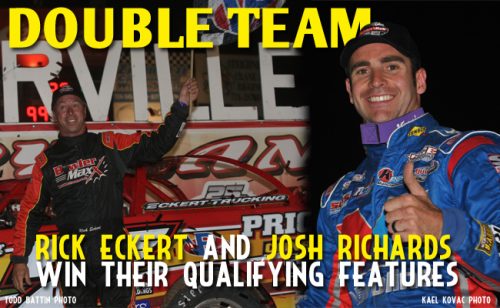 The redraw in Saturday’s program will determine where the eight drivers will start in the feature. Of the eight spots, six of them were solidified by series regulars; Norris, who was one of the two non-series competitors, hails from Sarver, Pa. END_OF_DOCUMENT_TOKEN_TO_BE_REPLACED

Pulls Away to Capture Win No. 17, Tying Single Season Record 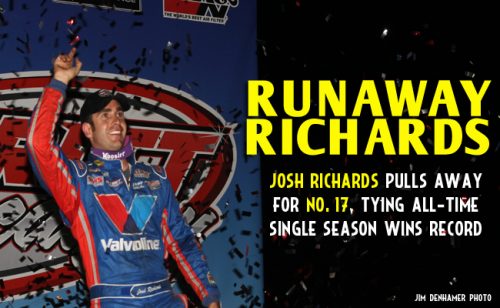 “We got to win six or seven, and we’ve had a phenomenal year,” Richards said. “It’s just crazy to think we’ve had ten wins since then. The track moved around quite a bit, more than I thought. I thought the bottom was going to be better than the top. The top had just enough brown where I was a little too tight early. But once the tires got to speed it was a lot better. I was just trying to get through lapped traffic the best I could, catch the brown, and it was a lot of fun racing. I can’t thank Merritt enough for holding us out another day.” END_OF_DOCUMENT_TOKEN_TO_BE_REPLACED

Richards Leads the Charge to Win No. 14 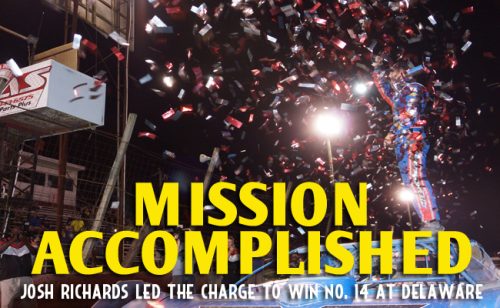 DELMAR, Del. – August 11, 2016 – Josh Richards pulled away from the field Thursday night, winning the Fulton Bank 50 at Delaware International Speedway by more than four seconds. The victory was Richards’ 14th, and with it he earns the $10,000 purse.

Richards’ wins total this season stands three shy of tying Darrell Lanigan for most wins in a single season (17). Not only that, Richards tied Lanigan for most series wins all-time with 72. The win was Richards’ second consecutive trip to victory lane.

“That’s wild,” said Richards about tying the record, receiving a standing ovation from the crowd. “It’s been an incredible season. We’ve had so much fun. You see guys get on these rolls. You just don’t want to mess it up. I’m so blessed to be able to do what I do.”

Kenny Pettyjohn and Amanda Whaley, two Delaware natives, led the 24-car field into the green flag of the 50-lap feature. Though Pettyjohn drew the No. 1 spot earlier in the night, Whaley overtook him within the first few laps; Pettyjohn fell out of the top five. She thereon built a two-second buffer from the field, and she was consistently quicker than the rest of the field by two-tenths of a second. END_OF_DOCUMENT_TOKEN_TO_BE_REPLACED

Richards wins No. 13 at Cedar Lake 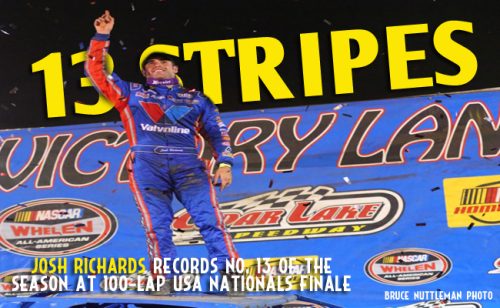 NEW RICHMOND, Wisc. – August 6, 2016 – Josh Richards won his second career USA Nationals finale Saturday night at Cedar Lake Speedway.  The victory marked his 20th of the season (13th in the series) and 71st of his career in the World of Outlaws Craftsman® Late Model Series – one win from tying for the all-time series record.

“I don’t know what to say…I’m speechless,” said Richards, winning the $50,000 purse. “I can’t thank everyone enough for coming out. This car has been so fun to drive. This is awesome.”

The caution-filled night began with the 100-lap feature’s first on lap 10. Jonathan Davenport, who started runner-up to Shane Clanton, suffered a flat right rear tire. It seemed “Superman” had found his Kryptonite, as he veered-off into the pits. The other 30 cars moved-up for the restart; Richards and Mason Zeigler shared the podium with Clanton.

On the restart Clanton and Richards separated from the rest of the field. Zeigler and Eric Wells paired-up and dueled for the third spot. Wells was the weekend’s fast time winner, a first for him since his rookie year in 2013. He continued his hot streak; however, Zeigler briefly extinguished his chances of passing him. END_OF_DOCUMENT_TOKEN_TO_BE_REPLACED

Feger Pulls Away for Win 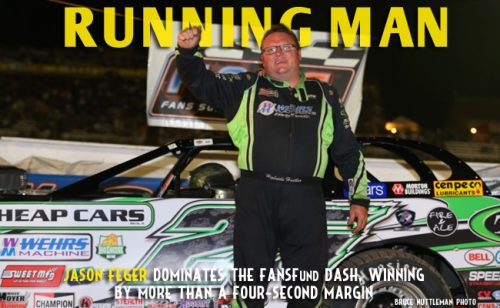 NEW RICHMOND, Wisc. – Jason Feger ran away with the FANSFund Dash Friday night at Cedar Lake Speedway. Feger started the day from qualifying toward the back of the pack to placing third in his heat. He heated up as the night went on, capitalizing when it mattered the most to win the $2,500 purse.

Feger led the 12-driver field into the green flag for the 12-lap shootout. Rookie of the Year contender Tyler Erb was to start 13th in the show, but mechanical issues prevented him from competing. Once the green flag waved the field in, the “High-side Hustler” did what he does best, rising to the top of the track with his No. 25F Cheap Cars/ Floyd’s Waste Systems Black Diamond racecar.

“It’s the fastest track we’ve been on all weekend,” said Feger, who took advantage of the track preparation before the race. “We were able to get to the top of the track there on the cushion, and it was pretty easy to run on. I just held it on the floor for 12 laps and made sure I didn’t jump over the berm.” END_OF_DOCUMENT_TOKEN_TO_BE_REPLACED

Richards by the Dozen 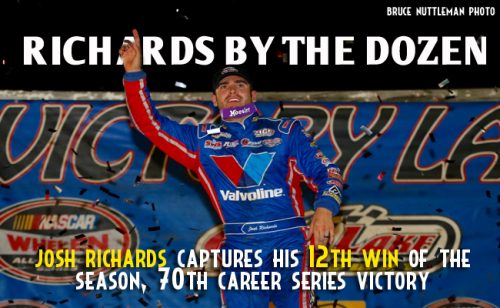 “From 2013-15 the track changed,” said Richards, who won the $6,000 purse. “But from last year to this year, the track was quite a bit different – with the surface and everything. We could race on it really well. I want to thank all the track guys for putting on this event and working hard on the track. This is the track to race on. Thanks to all the fans for coming out.”

Richards, who won his heat race earlier in the night, caught fire in the 30-lap feature. He was supposed to start fifth in the A-Main, but electrical failures in Jonathan Davenport’s car forced him to forfeit third position. This moved everyone up by one position. Davenport won the show last season, but helped others’ cases to win this time around. END_OF_DOCUMENT_TOKEN_TO_BE_REPLACED

Lucky No. 7: Clanton wins at Shawano 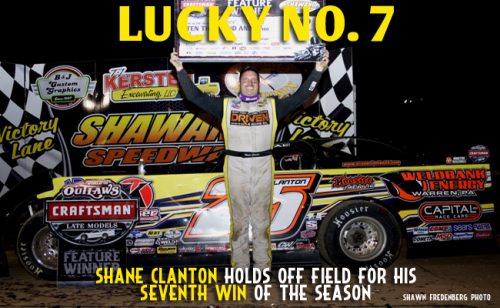 SHAWANO, Wisc. – August 2, 2016 – Rivals Shane Clanton and Josh Richards battled down to the wire Tuesday night at Shawano Speedway (Wisc.), but there could only be one top dog at the checkers of the “Sun Drop Shootout.” It was Clanton who idled into victory lane in front of a packed grandstand. This was win No. 7 for the “Georgia Bulldog.”

“It takes a great piece under the hood to make these big half-mile [tracks] work,” said Clanton, who has won at two other half-mile tracks this season (Volusia, Mason City).

Before the green flag waved the field in, Clanton – the series defending champion – climbed one position to start in the first row on the outside. Jimmy Mars was supposed to lead the pack. But, an impromptu tire change before the feature sent him to the back of the pack.  This left two former champions to a drag race down the front stretch for the lead. Clanton and 2011 series champion Rick Eckert led the stampede of cars into turn one, where Clanton had the advantage on the outside. He took the lead.

Within the first 10 laps, the margins were equally divided among the top three – Clanton, Eckert and points leader Richards. The group spaced-out into approximately 1.3-second margins, and it stayed that way until the group hit lapped traffic on lap 11. END_OF_DOCUMENT_TOKEN_TO_BE_REPLACED

Dennis Erb Jr. Rekindles a Past Battle Between the Two Late 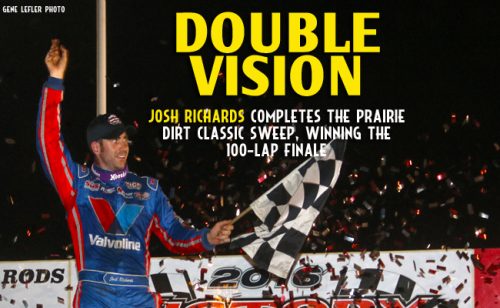 FAIRBURY, Ill. – July 30, 2016 – Josh Richards completed the “Prairie Dirt Classic” sweep Saturday night in front of a packed house, winning the 100-lap finale at Fairbury American Legion Speedway. The victory was Richards’ 11th of the season and his 69th of his career in the series.

“To win this race at Fairbury, it’s one I’ve always looked forward to,” Richards said. “It’s cool to finally get one.”

Richards, starting 11th in the feature, worked his way to the top gradually. While he was in the pursuit of the podium, race leader Steve Casebolt – who led the field into the green flag – established himself on the top cushion of the 1/4-mile oval.

In the opening laps, Casebolt extended his lead to nearly four seconds, while the trio of drivers behind him spanned three-wide among the width of the track. On lap 15, Casebolt broke into lapped traffic – using the nose of his car to wedge himself through the field. Don O’Neal capitalized on the three-way battle, side-skirting the completion into second position. O’Neal used the bottom of the track for the majority of the race. END_OF_DOCUMENT_TOKEN_TO_BE_REPLACED