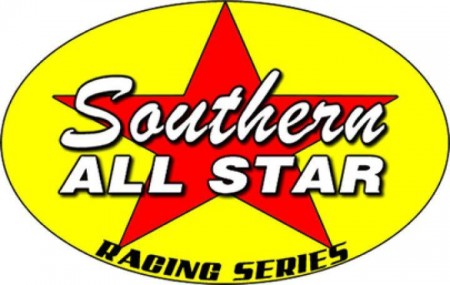 MARYVILLE, TN—The Southern All Star Dirt Racing Series will make it’s first of four appearances this Saturday night May 3rd for the Annual NASCAR weekend at the Talladega Short Track in Eastaboga, AL., for a 40 lap $4,000 to win event along with a full racing program.

NASCAR weekend has always been a big weekend with the Southern All Stars as many of the drivers like to compete in the Friday night regular program that will pay Super Late Models $2,000 to win.

Saturday the Southern All Stars will compete in White Performance qualifying with the top four from group A & B locked in, then there will be 2 PPM Racing Products B Mains along with a 40 lap feature event.

Riley Hickman of Ooltewah, TN., is back on top of the series standings after three events and will be one of the favorites to take the win, as he will be joined by Harvest, AL., driver Dylan Ames, who is in his first year of competing with the series and currently is second in the points after a top five run at Smoky Mt last weekend.  Third place in points is no stranger to Talladega Short Track and that is Bo Shirley of Gadsden, AL., who is making a strong charge for the top spot in the points.  Fourth place is Josh Putnam of Florence, AL., who has worked his way into the top five in three and is also going to make a run at the championship and fifth is Chris Wilson of Crossville, TN., who also is current Cruise with the Champions/Dirt On Dirt Rookie of the Year leader, all of these drivers are expected to be in action at Talladega Short Track Saturday night.

Other drivers that are expected to be in action include Jason Hiett of Oxford, AL., who is sixth in series points Joe Armistead of Senoia, GA., who is eighth in points, Todd Morrow of East Ridge, TN., who is ninth in points, Lavon Sparks of Phenix City, AL., Williams Thomas of Phenix City, AL., Cale Finley of Athens, AL., Mark Gant of Savannah, TN., Ray Cook of Brasstown, NC., Brandon Kinzer of Allen, KY., Jake Knowles of Tyrone, GA., and Austin Kirkpatrick of Ocala, FL.,

Gates will open at 9am on Saturday so you can get your haulers parked early and then go and enjoy the ARCA and Nationwide events over at the Talladega Superspeedway for the day then pit will open at3 pm, with Southern All Star Registration and tech set for 3:30 pm till 5:30 pm, drivers meeting is set for 5:30 pm and hot laps will follow at 6:00 pm.