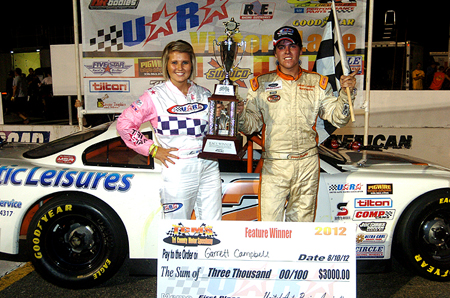 Sunoco Polesitter Travis Swaim jumped out to the early lead over outside front row starter Josh Wright and set the early pace until an incident between Tim George, Jr., and Tyler Laing brought out the first caution of the night. Out of the event, Laing was awarded the ARBodies Hard Luck Award after mechanical issues in practice and his early exit from the race. 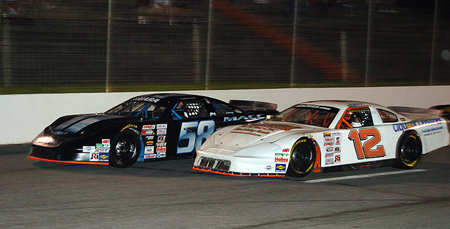 Soon after the restart, 2004 UARA Rookie of the Year Steve Wallace began marching towards the front of the field. By lap 50, he was out front and stretching his lead over new second place driver, Garrett Campbell.

Wallace dominated the last two-thirds of the event until a restart on lap 135 after a crash involving Josh Wright and Devin Jones. As the green flag waved, Campbell dove to the inside of Wallace, and Ronnie Bassett, Jr., dove to the inside of Campbell, making it three-wide into turn one for the race lead. Wallace slid up the racetrack and Campbell emerged with the top spot. The three-wide maneuver earned Bassett the Pigwire Electrifying Move of the Race Award despite only gaining one spot. Wallace continued to fall through the field until his car nearly stopped in turn two and he coasted to the pits with a flat tire and a broken engine.

“It really sucks, man, we work so hard, just me and two other guys, on getting this car ready,” said Wallace after the race. “To come out here and have the car to beat and then we have a flat tire and the motor breaks, it just sucks. But we plan to be back at Kingsport and have some fun there, too.”

After Wallace retired from the event, it was Campbell and Bassett left to duel for the top spot over the final laps. Campbell worked the high side of the track over the final circuits while Bassett stuck to the inside wall, tucking his nose inside of Campbell in each corner but unable to complete the pass.

The final caution of the night came out on lap 145 after an incident involving Julia Dawson, Thomas Beane, Tyler Church and Will Gallaher on the front straightaway. Following a lengthy cleanup, the only attempt at a green-white checkered restart saw Garrett Campbell get a huge jump on Bassett in turn four, but Bassett drove his car into turn one deep enough to nose ahead momentarily for the race lead. Meanwhile, a huge melee began at the back of the pack and brought the race to an end. Campbell, in the seconds before the caution light came on, was able to nose ahead of Bassett again and, according to race broadcast video, was ahead at the moment the caution lights illuminated around the speedway.

“This is unbelievable, we had a rocketship tonight,” said Campbell in victory lane next to his No. 12 Autocraft Technologies/Aquatic Leisures Chevrolet. “I knew when we were sixth fastest with only one qualifying lap that we had a car capable of winning the race. Ronnie gave me a run for it and I’m glad that we beat him, I think he could’ve gotten us had that caution not come out.”

Campbell’s win was his first this season and also helped Danny Cox to win the Comp Cams Engine Builder of the Race Award. Third place finisher Sean Rayhall drove from 19th to third and claimed not only the Circle Wheels/Xtreme Trophies & More Rookie of the Race Award, but also the Holley Performer of the Race Award for gaining the most positions (16) from the start. Travis Swaim extended his points lead with a fourth place finish and Scott Turlington claimed fifth after an engine change earlier in the afternoon.

The UARA-STARS will be back in action on Friday, September 14, at Kingsport Speedway in Northeast Tennessee for event 12 of the 16-race schedule. For more information on the UARA, visit their soon-to-be-revamped website at www.uara-stars.com, find them on Facebook (United Auto Racing Association), Twitter (@uarastarsseries), or call (828) 692-3833.