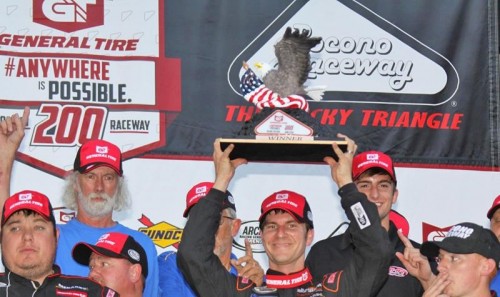 Despite being in the fuel conversation mode over the last 20 laps, Enfinger had to go as hard as he could over the final three laps to hold off Austin Cindric who had been chopping off as much as a half-second per lap over the final 10.

“We didn’t have the car to do it with…we made so many wholesale changes to the car over the week to get here,” Enfinger said. “We were losing fuel pressure with 20 to go…it never hiccupped but we had already made our bed. We pushed ourselves into a fuel mileage situation, so we took advantage of it.”

Enfinger, in the No. 23 Holmes II Excavation Chevrolet, changed four General Tires just once during the race on lap 30, then topped off with fuel on lap 37. From there, Enfinger, who led the final 17 laps, stretched his tires and gas tank to go the 80-lap/200-mile distance.

Cindric, in the No. 99 PIRTEK Ford, was on a completely different pit strategy, taking four tires and a full load of Sunoco gas on lap 50 to go the distance. Cindric, in only his third ARCA Racing Series start, was also consistently the fastest car on track all day, and showed it in a big way when he got within inches of Enfinger’s rear bumper in turns two and three on the final lap.

“Without a doubt, he was saving fuel,” Cindric said. “We had the fastest car all week. Really wanted to get to victory lane but congratulations to Grant.”

Cindric admitted that once he got to Enfinger’s bumper on the last lap, he thought about moving him.

“Of course I thought about it…every driver thinks about it…but I’m here to prove I’m a good driver, not wreck people. But it was the first thing that came to mind when we came out of turn two. I have no idea how Grant made it (on fuel), but he did a great job.”

Enfinger said afterwards he wasn’t worried about Cindric getting to him, and if he did, he was ready to make his car as wide as possible.

“Austin’s a clean driver…I wasn’t worried about a bump,” Enfinger said. “We were conserving fuel over the last 20 laps. Obviously when he showed up about 10 lengths behind with three to go, we had to give it all we had. We were prepared to make it very difficult to pass us coming to the line, if need be.”

Cindric was about a length away under the checkered flag in second.

Brandon Jones, in the No. 8 Messina Wild Life-Menards Chevrolet, battled from a lap down to finish third.

“We got above the blend line too soon coming out of the pits the first time, and had to do a drive-through,” Jones said.

Despite the penalty, Jones kept himself up front and got the Free Pass under caution to get back on the lead lap. Jones, who pitted at the same time as Cindric, was nearly five seconds behind Cindric at the final stripe.

Both Cindric and Jones were making their career-first Pocono starts. Jones debuted with the new Ranier Racing with MDM team.

“Ranier Racing with MDM was showing a lot of speed all week in this car,” Jones said. “We plan to run some more ARCA races. The General Tires were flawless all day…I’m looking forward to getting back with that tire.”

Rookie Dalton Sargeant finished fourth in the No. 55 Toyota Racing Development-Windows 10 Toyota with rookie Brady Boswell in fifth in the No. 98 Mason Mitchell Motorsports Chevrolet.

“Obviously, there were some big unknowns with the composite bodies,” Enfinger said. “We have a lot to learn about the cars on speedways and today was a great step in that direction. We learned last year’s set-up with the steel cars doesn’t work on the composites. We struggled all week but worked really hard and made some good gains. We were two- and three-side during the race. My initial impression is that the car gripped-up really good.”

Five drivers traded the lead nine times over the duration, including rookie standout Myatt Snider who led four times for 33 laps in the No. 22 Original Louisiana Hot Sauce Ford. However, Snider, on a different fuel strategy, had to pit for a late-race splash of gas to get him to the finish, and never got back to challenge. Cindric led three times for 17 laps. Benjamin led 10 laps. Byron led three.

Next up for the ARCA Racing Series presented by Menards is the Corrigan Oil 200 at Michigan Int’l Speedway Friday, June 10.