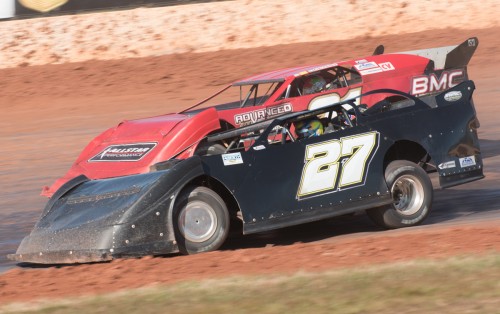 BRUNSWICK, GA – David Smith of Inman, SC held off a spirited challenge from Cale Conley of Vienna, WV to win the 50-lap Round 5 of the RockAuto.com Winter Shootout for the NeSmith Chevrolet Dirt Late Model Series on Sunday at Golden Isles Speedway. Smith led all 50 laps in the Upstate Wholesale Cars Special, but that did not describe the racing action.

Smith was the only car that did not hot lap before the race because Smith knew what the track was going to be like in a rare daytime race for the NeSmith Late Models. The track did get black, hard and slick, and it was also a track Conley liked after running the pavement last season in the NASCAR Xfinity Series.

“Getting the pole last night was the key to winning this race, but I knew somebody was with me during the second half of the race,” Smith said. “Cale is a good racer and I knew he wouldn’t do anything to get us both in trouble. He really made me hit my marks and cover the bottom. We didn’t hot lap this morning because we only had four tires for this race, and we didn’t want to wear them out.”

After starting seventh, Conley moved up to the second spot by lap 11 and kept the pressure on Smith, getting the nose of his BMC Motorsports Special both inside and outside Smith on several occasions. He got close, but not enough to complete the pass, had he had to settle for second, .299 seconds behind Smith at the checkered flag.

“My crew chief Danny Myers gave me a car that could have won the race today, but the driver just couldn’t get it done, as I made a couple of mistakes out there,” Conley said. “I’m trying to put some things together for our NASCAR program, but my plans are to run the NeSmith Series until that happens, unless Tony Stewart calls to ask me to drive the 14 car at Daytona. I think the chances are pretty good that I’ll be in Cochran, GA with the NeSmith Series on February 27 and 28.”

P.L. Williams of Dublin, GA turned in his second straight third-place finish driving the Dublin Tire TNT and Ryan King of Seymour, TN came from the 17th starting spot to finish fourth in the Brian King Roofing Stinger. King was the only driver that dusted off the top shelf of Golden Isles Speedway and thrilled the crowd by riding the outside rim from 17th to fourth.

Cla Knight of North Augusta, SC took the sixth spot in the Augusta Aquatics Special and Robert Diekemper of Bloomingdale, GA was seventh in the Chatham Classic Homes Special. Chesley Dixon of Swainsboro, GA drove the Central Fence Company Special to an eighth-place finish, and Will Herrington of Cochran, GA finished ninth in the Herrington Auto Warrior.

Ryan Carter of Blackshear, GA rounded out the top ten in the Mark’s Auto and Collision Special. The 17-year-old driver was the Sunoco Young Gun of the Race. In preliminary action on Saturday night, Smith was the Fast Qualifier with a lap around the 4/10-mile clay oval in 16.262 seconds. Rain after Time Trials forced a postponement of the main event until Sunday afternoon.

Smith took the lead at the drop of the green flag to start the race, but the field was slowed on the first lap when Edge spun in turn two and collected Jeremy Faircloth of Swainsboro, GA in the LJR Forestry Warrior, Nevin Gainey of Fort White, FL in the ROT Construction Special, Cole Godowns of Louisville, GA in the Godowns Farms Special, and Rodgerick Dykes of Smith Station, AL in the Braswell Bodies Warrior. That brought about a complete restart.

On the restart, Trent Ivey of Union, SC in the Ivey Construction Special, Blake Spencer of St. Augustine, FL in the Bozard Ford GRT, and Gainey tangled in turn four to necessitate a second complete restart. The third try was the charm, as Smith took the lead followed by Williams, Dixon, Conley and Knight.

By lap four, King was up on the cushion at the high side of the track blasting through the field from 17th to seventh. Cecil Eunice of Blackshear, GA brought out the third caution flag on lap 11 when he stalled going down the back stretch. The restart saw Smith leading with Williams and Conley doubled up behind him for the Dixie-Style Double-File Restart.

Conley was able to get around Williams for second on the restart, but the field was slowed once again when Gainey brought out the yellow flag on lap 12 with a spin in turn four. Smith prepared for the double-file restart in a row all by himself with Conley, Williams, Dixon, Knight, Diekemper, King, Herrington, Edge and Faircloth doubled up behind him in second through tenth respectively.

When the field went back to green flag action, Smith led the field to the bottom groove, with the exception of King, who bolted for the top of the race track, and by the completion of lap 13 he had vaulted himself up to the fourth spot. Conley was able to keep Smith in his sights, and by the halfway point of the race, he began to look for room inside the race leader.

Smith was up to the challenge, even though Conley was able to get a front fender up to Smith’s door on a couple of occasions on both the inside and the outside. Smith had the better bite in his Hoosier Racing Tires coming off the corners, and he was able to keep Conley behind him to claim the $3,000 top prize.

The final two races of the RockAuto.com Winter Shootout for the NeSmith Chevrolet Dirt Late Model Series will be contested at Cochran Motor Speedway in Cochran, GA on February 27 and February 28. Round 6 on Saturday night, February 27 will be a 40-lap $2,000-to-win race, and the finale on Sunday night, February 28 will be 50 laps and pay $2,500-to-win.

OFFICIAL RESULTS FOR ROUND 5 OF THE ROCKAUTO.COM WINTER SHOOTOUT FOR THE NeSMITH LATE MODELS AT GOLDEN ISLES SPEEDWAY IN BRUNSWICK, GA ON 2/6-7/16:

DID NOT START MAIN EVENT: