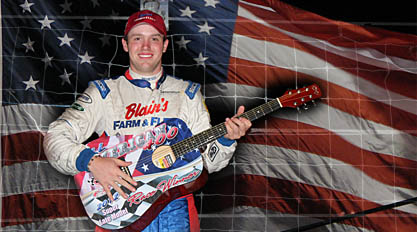 Charlotte, NC 10/8/12– There were two winners Saturday night at the Fairgrounds Speedway in Nashville, Tennessee; Mother Nature and Ross Kenseth, son of NASCAR champion Matt Kenseth. The nineteen year old Clemson University college student picked up his biggest win of his career when series officials were forced to call the 28th All American 400 at lap 220 of 400 due to steady rain that overtook the speedway just past the event’s halfway point. The win was Kenseth’s second of the season in PASS South Series competition dating back to April 21st at the Orange County Speedway in Rougemont, North Carolina.

Kenseth took advantage of a top ten qualifying effort, taking the green flag from the seventh position on the initial start of the 400 lap event. Several quick movers and losers were fast to scatter throughout the field including that of Eddie Hoffman, who after leading the first thirteen laps began to fade in a hurry, handing the lead to Iowa native Nate Caruth, driving a Brad Keselowski Racing owned machine. While Hoffman was going back it was PASS North Series regular Johnny Clark making his way to the front from a thirty-fourth starting position.

The first caution of the night was displayed on lap thirty for a single car spin by Johnny Brazier bunching the field up for the first of many restarts. Local driver Willie Allen, one of six drivers pulling the double duty racing in both the super and pro late model divisions, jumped out to the lead for a short eleven lap run at the top spot before handing the race lead back to Caruth. It didn’t take long however; for Caruth to guide the field through lap traffic around the fast 5/8th mile facility. Traffic became an issue on lap sixty-eight for fast qualifier Kyle Benjamin when he made a move to the inside of a slower Rick Brown off of turn four before the two made contact sending Benjamin’s machine nose first into the inside wall while running seventh at the time.

The timing of the incident was exactly what was needed for the leaders to hit pit road for the event’s first round of live action pit stops. The pit strategy of possible weather moving in on the event quickly came to fruition as several teams made the decision to stay out on track mixing up the top five. New leader Daniel Hemric lead the field into turn one with Mason Mingus, Gray Gaulding, Clay Rogers, and Johnny Clark in tow. Several other drivers such as TJ Reaid and Garrett Evans, who made a 2,200 mile trip from Washington state to compete, also showed their strength in the early going. A single car spin on lap 106 followed by a yellow again on lap 132 for debris slowed the field on two more occasions before setting up what would be exciting sprint to the halfway mark and inevitably the checkered flag.

After spending majority of the race amongst the leaders but under the radar NASCAR driver Kyle Busch finally decided to flex his muscle taking the lead on lap 133 from Donnie Wilson and opened a half straightaway lead over the field. Busch continued to lead while many of the PASS South Series championship contenders who appeared to play things safe throughout the first 100 laps began to surface within the top ten. Kyle Grissom, Preston Peltier, and Brandon Ward all occupied top ten positions as Busch did battle with a hard charging Hemric for the lead at the lap 188 mark with Ross Kenseth watching it all from the third position.

Just five laps shy of halfway a cut tire on Peltier’s #26 machine brought out the yellow for debris in turns one and two. As the field slowed the rain began to fall slightly putting in question the completion of the race with Busch, Kenseth, and Bubba Pollard holding down the top three positions. Under “caution-green” flag scenario the field stayed out on track in effort to keep the track dry under the damp conditions and ensuring the race got to the halfway point necessary to be considered official. As the weather lifted and approval from the majority of the field a single file restart, due to safety reasons, on lap 206 allowed green flag racing to get back underway. Just as they did, Busch who was leading at the time, appeared to cut a tire coming out of turn four sending his #51 machine into a spin cycle making hard contact with the outside wall ending his night.

Busch’s misfortunes were Kenseth’s coincidence as he inherited the lead on a lap 207 restart and manage to hold the top spot over Bubba Pollard, DJ Shaw, and a pair of drivers who looked to be on their way to the front in the form of Johnny Clark and Daniel Hemric. With Kenseth out front Mother Nature decided to finally open the clouds all the way and let the rain open up over the Fairgrounds Speedway. With cars under covers and track drying crews making no progress, officials from PASS and Fairgrounds Speedway made the decision to call the race official at lap 220 giving the 28th running of the All American 400 win to Ross Kenseth.

Next up for the “BIG BOYS WITH THE BAD FASTTOYS” PASS South Super Late Model Series will be the North vs. South Shootout 150 at the Caraway Speedway located in Sophia, North Carolina on Saturday November 10th. For more information on the PASS South Series or any of the PASS sanctioned series visit http://www.proallstarsseries.com/.