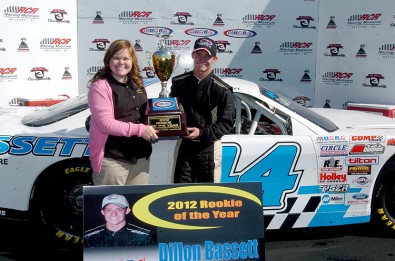 During the spring visit to the Rock, Rogers had a strong car, but his loose racecar sent him spinning into the grass on the front stretch.  Rogers has had tons of success at The Rock and was hoping for some redemption during the weekend. He was at top of the leader board during Thursday’s practice, started on the front row, and performed a flawless race.

With the five point bonus awarded to the pole winner, Bassett closed the gap point leader Travis Swaim had on him for the Championship. Bassett already clenched the 2012 Rookie of the year title and had every possibility of winning the Championship as well. With Bassett’s main focus on charging for the lead, he was aware of the problems Swaim was battling during the race.  “When I saw the 28 having problems, there was a glimpse of hope for the Championship, but that wasn’t our main focus. We wanted to win the race,” says 2012 Rookie of the Year. “When you win races, points seem to take care of themselves; coming home 2nd is nothing to hang your head down for!”

During the first couple of laps, Championship contender Swaim was running hot and lost his power steering. His teammate, Mike Skinner came down pit road first and the  team hustled to switch out power steering pumps. Swaim was able to get the car back on the track and make up some ground. Unfortunately, his car wasn’t in condition to
finish the race. With Bassett finishing second and Swaim’s 24th place finish, Swaim won the championship by 18 points.  “We knew coming into the race that we needed a solid run to win the Championship,” says 2012 Champion Swaim. “When we started having the problems only a few laps into the race, my guys fought hard to make sure I ran every lap I could. They never gave up and their hard work paid off.”

While most of the attention was on the Championship situation, Brodie Kostecki, Blake Jones, and Darrell Wallace Jr. had strong runs and finished in the top five. Wallace Jr. gained 12 positions, awarding him the Holley Performer of the Race Award.  Before the last restart, Scott Turlington and Cory Joyce were battling in the top five. Once the flag went green, Joyce spun his tires and Turlington ran into the back of Bassett, making his radiator duck work loose. Turlington fell back to 6th and Joyce back to 7th. Jeremy Burns finished 8th for his first Rockingham appearance with the UARA-STARS.  Tim George Jr. claimed the 10th position in the Championship points for this 9th place finish, while Brandon Jones rounded out the top ten.  George and Will Gallaher were tied for for points position prior to the event.  In the end George beat out Gallaher by a mere 5 points with Ronnie Bassett Jr and Roger Powell just 10 points behind George.

Along with the excitement of crowning our season Champion and Rookie of the year, the season finale was a four caution race. As a safety precaution, Blake Jones was blacked flagged early in the race for smoke coming from his car. He fell a lap down, but was the recipient of a lucky dog pass. Jones drove from the back to finish 4th.

During the second caution for debris, some drivers checked up too soon, throwing Steve Wallace to the outside wall of turn one. His hit was hard enough to take him out of the race. David Garbo Jr. also had a hard time a couple laps later when he came off of turn four. The final caution fell with less than ten laps to go when Zeke Shell got spun
around on the backstretch.

The UARA-STARS ended their 2012 season with a thrilling and action packed finale. To keep up with the STARS during the off season, visit them online at www.uara-stars.com or call (828) 692-3833. Fans are also encouraged to “like” them on Facebook under the United Auto Racing Association and follow them on Twitter @uarastars.
Unofficial Results for the 2012 Season Finale at the Rock: