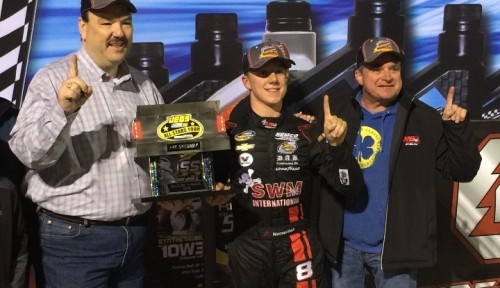 Salem, IN. (May 15, 2016) – John Hunter Nenechek left no doubt that he has mastered Lebanon I-44 Speedway Saturday night, when he won his second straight Champion Racing Oil “Masters of the Pros” 144, one of the top Pro/Crate Late Model events in the country sanctioned by the JEGS/CRA All-Stars Tour Presented by Chevrolet Performance. Saturday night’s win was not as easy as last years, as fellow North Carolina native Trevor Noles battled Nemechek over the last 36 laps, swapping the lead a couple of times before Nemechek managed to pull away on the final green, white, checker restart to get the win.

“I really love this place, the track, the fans and this event is just awesome”, remarked Nemechek in victory lane. “I have to thank my crew for all the hard work and my dad for working out the plans to get me here to be able to race and get the win today.”

Nemechek raced in Friday nights NASCAR Camping World Truck Series race in Dover, Delaware, then hopped on a delayed flight early Saturday morning and made it to the track to only get on the track one time in the first practice session. Nemechek showed he didn’t need a lot of track time to be ready, he was the fastest in practice during the second session after only getting four practice runs. An early qualifying draw resulted in a ninth place starting position for the race, but that didn’t keep Nemechek at bay very long.

After 2013 and 2014 ARCA/CRA Super Series Champion Travis Braden led the first 56 laps, Alabama racer Justin South charged to the front to get the lead on lap 57 while Nemechek and Boyne Machine Company Fast Qualifier Noles worked their way to the front. South continued to lead after the lap 100 break, when he suddenly shot off the track and crashed hard into the turn three wall after something broke in the steering on lap 108. South was okay, but done for the night, handing the lead to second place Noles with Nemechek close behind, setting up the great battle between the two over the last 36 laps that included two late restarts were they raced side by side for several laps with a little bit of contact between the two hard racing competitors.

Nemechek claimed the $8000 first place payoff, plus his second signature green jacket, similar to the one that is known for adorning the champion of golf’s Masters event. With the win Nemechek remains perfect in JEGS/CRA All-Stars Tour Presented by Chevrolet Performance competition were he now has seven wins in seven series starts over the last three years.

A total of 43 cars signed in for the event, breaking last year’s all-time mark for cars at a JEGS/CRA All-Stars Tour event. The field for the Champion Racing Oil “Masters of the Pros” 144 was full of talent which showed during the event, all 22 cars running at the end of the event were on the lead lap.

13 year old Mike Clancy Jr. led all 30 laps to get the win in JEGS Challenge event for the teams that didn’t get to race in the “Masters of the Pros” 144. John Bolen was second, Brennon Willard was third, Hope Hornish was fourth and Josh Woody was fifth.

Andy Bozell was the T & K Trucking Hardcharger Award winner after finishing in 11th from his 22nd place starting position. Bozell’s team earned the PitBoxes.com Pit Crew of the Race Award after making some changes to the car on a late pit stop helping Bozell come from the back to get his 11th place finish. Travis Eddy was the VanDoorn Racing Development Rookie of the Race. Nemechek and Quinnton Bear earned Great Lakes Tire/Hoosier Performance Awards. Nemechek earned the AR Bodies Cool Move of the Race Award, while Noles won the Sweet Move of the Race Award.