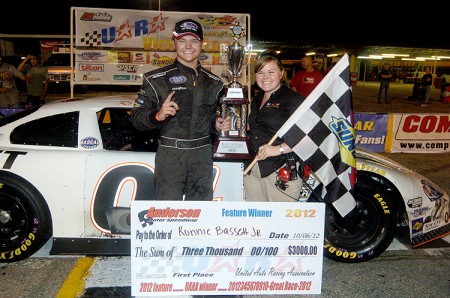 Anderson, S.C. (10/6/12) –The local drivers that suited up and raced with the UARA-STARS for the Goodyear 150 stole the show Saturday Night at Anderson Motor Speedway, but it was Ronnie Bassett Jr. who won the race. After taking a couple of races off, Bassett Jr. returned in winning form by saving his tires for the final restart of the race.

His third place starting position gave him a spot at the front, but it was his patience that got him the win. Local drivers Jeremy Burns and Ralph Carnes stayed in the front pack the entire night and finished 2-3. Carnes jumped out and led the majority of the race, awarding him the Tilton’s Most Laps Lead Award.  R.A. Brown, David Roberts, and Justin Hobgood also jumped out front and battled amongst the top five early in the race.

While those locals led the field, Dillon Bassett was making his way through the field. After almost spinning during his qualifying lap, Bassett started from the rear and gained the most positions during the race. For the second event in a row, he was awarded Holley Performer of the Race and Circle Wheel/Xtreme Trophies and More Rookie of the Race. Bassett wasn’t the only rookie with a good run. Brandon Jones who has been showing more and more muscle lately had a top five finish and worked his way from an 11th place starting position to 5th. Will Gallaher had taking some races off to get adjusted and focused on school.  Gallaher’s return saw him come home with a solid tenth place finish after gaining 9 spots during the race. 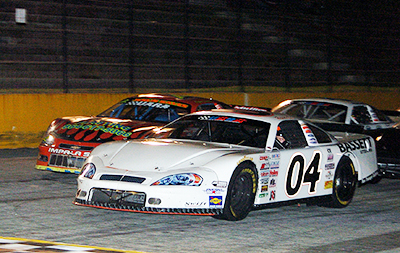 Current points leader, Travis Swaim, had a rough night after starting from the point on the grid. Swaim captured the Sunoco Pole for the 8th time this year giving him the record for most poles in one season.  Former Champion Danny O’Quinn, Jr. had held that honor since the inaguaral season of the UARA with 6 poles in one season to his credit.  Swaim’s team struggled with engine problems all night and ended the race with a flat left-rear tire. Third place point contender Sean Rayhall started on the outside pole, but floated to the back as well. Rayhall battled a tight race car and his right-front breaks kept locking up.

The first caution of the night came out when rookie Trey Marcham spun in turns one and two. Marcham made a full recovery from his early spin and finished sixth. However his finish didn’t come that easy. He also battled with his car and became a wheelman which awarded him the Pigwire Electrifying Move of the Race Award.

While the other locals were having early success, Darrick Coomer had trouble before the race and got spun around on lap 41. Dylan Hall was on his toes and missed Coomer’s backwards car as he drove into turn three. This was Hall’s debut event with the UARA-STARS.  Hall shows promise and is pondering a possible run for Rookie of the Year in 2013.

Justin Hobgood’s strong run changed during the second half of the race. He made hard contact with rookies Devin Jones and Cory Joyce. The contact with Joyce was due to the aftermath of the spin from Jones. The spin happened so fast, that Joyce didn’t have enough time to see the caution and hit head on. Joyce was awarded the AR Bodies Hard Luck of the Race Award due to this misfortune.

A few laps after the restart, UARA officials threw a caution for debris on the back stretch from Jones’ car. While the caution was being flown, Will Burns got turned around on the front stretch and ended his night.

Saturday night racing action continues on to next week at Tri-County Speedway for the Alpha Energy Solutions 150.  With the mishaps from the Anderson event, the battle for the championship is getting tense.  Dillon Bassett is continually gaining points on leader Travis Swaim and extending his rookie lead over second place rookie contender Rayhall.  With two events remaining, the championship is still up for grabs. Don’t look for any of these STARS drivers to throw in the hat until the final checker falls at Rockingham.  The competition level of the UARA-STARS this season has been phenominal.

Racing along with the UARA-STARS at Tri County for the Alpha Energy Solutions 150 will be the Street Stocks, Renegades and Carolina Vintage Racers.

Unofficial Results to the Goodyear 150 at Anderson Motor Speedway: