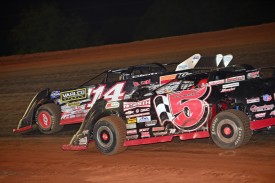 EASTABOGA, AL – On a normal night when Ronnie Johnson of Chattanooga, TN comes from the 12th starting spot and wins a NeSmith Chevrolet Dirt Late Model Series race, it’s a pretty big story. That wasn’t the case at Talladega Short Track on Saturday night. The big story was the driver that finished fourth. His name is Tyler Clem of St. Petersburg, FL and he’s 12-years-old.

The race was billed as a Race For The Ages on the Grand Stage of Talladega NASCAR Weekend. The oldest driver in the field was 82-year-old Legend Red Farmer of Hueytown, AL, and 70 years his junior, Clem at age 12 was the youngest driver among the 58 different drivers that competed over the weekend with the NeSmith Chevrolet Dirt Late Model Series.

Two-time NeSmith Chevrolet Dirt Late Model Series National Champion Eric Cooley of Fulton, MS joined Johnson and Clem in a three-wide battle for the lead, a war that waged for 14 of the 50 lap feature race that had everyone on the grounds off their seats. Clem took the lead on lap four, and began to pull away.

By lap 19, Johnson had charged up from his 12th starting spot in the NeSmith Chevrolet Special to challenge Clem for the lead. Johnson tried inside and outside to grab the point, but Clem had just enough coming off the corners to hold him off. By lap 25, Clem had a pair of two-time National Champions racing him on each side of him.

Clem showed the talent and skill of a veteran three times his age, as he positioned his race car in just the right position to spoil any momentum either Johnson or Cooley could muster to make a challenge to take the lead from the youngster. The 12-year-old Clem had a wave of people from one end of the grandstand to the other helping him along with spirited fist pumps in the air!

Clem’s defense of the race lead, however, did take its toll on his tires. Johnson had the outside for a lap 32 restart, and he got a good run to roll around the outside of Clem, who just couldn’t find the traction he needed to hold off the 59-year-old veteran.

Clem would fade to fourth by the checkered flag, but it didn’t matter if he finished fourth or 24th, Tyler Clem might as well been Dale Earnhardt Jr. in Talladega, AL on this Saturday night. He won himself a lot of new fans, many of whom may had just seen their first dirt late model race.

Sure fans on Sunday at the big track will be talking about Dale Jr., Jeff Gordon, Harvick, Johnson, and Busch, but if you listen closely, you may hear a few people talking about this 12-year-old Tyler Clem and what he did the night before across the street on the dirt at Talladega Short Track.

“We won the race, but Tyler Clem is the show tonight,” Johnson said in the winner’s circle. “That is one impressive young man because at my age, these races are getting harder and harder to win, and Tyler really made me work for this one. He did things tonight in a race car that you can’t teach someone. They are just things that come natural, and Tyler showed tonight he has natural ability to drive a race car.”

Cooley finished second in the Bryson Motorsports/Cooley Transport Special, and third was Matt Henderson of Loudon, TN in the Mighty Muffler and Brakes Rocket. The top three drivers customarily come out on the front stretch for after-race interviews, but the crowd wanted Clem to come out for a curtain call, and the youngster joined the post-race party.

As he climbed from his Vahlco Wheels Rocket, Clem was greeted by a crowd roar only heard in Talladega County, AL when Dale Jr. takes the lead at the track across the street. It brought a big grin of both thanks and amazement across the face of Clem. It was quite an experience for a 12-year-old to take in, but spoke to the crowd with poise and humility.

“At first, I couldn’t believe I was leading a NeSmith Chevrolet Dirt Late Model Series National Touring race,” Clem said. “Then I couldn’t believe I had Ronnie Johnson on one side of me and Eric Cooley on the other, and they weren’t flying by me. Ronnie Johnson is the best there is. He’s a legend and a Hall of Fame driver. It was just unreal to race side-by-side with him as long as I did.”

Cale Conley of Vienna, WV also ran as high as third in the race, but ended up fifth in the AAA General Contractors Special. Conley spent the day competing in what he called a “nerve racking” NASCAR Xfinity Series race across the street at Talladega Super Speedway, and ran as high as second in that race.

Joe Noogin of Boaz, AL finished ninth in the Noogin Body Shop GRT and Adam Gauldin of Talladega, AL rounded out the Top 10 in the Adam Gauldin Racing GRT. Johnson was the Beyea Headers Hard Charger of the Race and Henderson was the Cruise With The Champions Rookie of the Race.

In preliminary action, Cooley was the Mike Vaughn’s Auto Exchange Fast Time Award winner by out-timing the 46 Saturday night entrants with a lap around the ¼-mile clay oval in 15.161 seconds. The three ten-lap B-Main Races were won by 13-year-old Cruz Skinner of Oxford, AL in the Skinner’s Body Shop CVR, Johnson, and Sitton.

Cooley took the lead at the start of the race followed by Henderson, Morrow, Nick Lyons of Centrailia, IL in the F&L Salvage Special, and Clem. Lyons spun out of the fourth spot in turn four on lap three to bring out the first of six caution flags. After the restart, Henderson got by Cooley for the lead, and on lap four, Clem rode the high line around Henderson to take the lead.

Clem tried to pull away, but didn’t get very far before the second yellow flag of the races was waved over the field on lap seven when Cody Martin of Christiana, TN spun the Martin Motorsports Warrior in turn four. Clem had Henderson, Cooley, Morrow, Conley, Forest Trent of Talbott, TN in the Trent Logging Rocket, Edge, Gauldin, Ryan King of Anniston, AL in the David King Automotive Special and Skinner doubled up behind him for the “Dixie-Style” double-file restart.

Conley was on the move when the green flag came back out, as he got by Morrow for fourth and then on lap eight, passed Cooley for third. Johnson dusted off the top shelf of Talladega Short Track to sail around the outside of Cooley to take over fourth on lap nine.

Justin Shipley of Douglasville, GA spun the Rogers Mechanical Special in turn four on lap 11 and collected Mike Combs of Odenville, AL in the Pro Grafx Special. The contact sent Shipley upside-down. Shipley walked away from the flip, but his race car was done for the night. Clem held the lead for the restart, but back in fourth and fifth respectively, Cooley and Johnson were headed to the front of the pack.

Johnson drove around the outside of Cooley to take fourth on lap 14, and then began to challenge Conley for the third spot, which he claimed on lap 16. Adam Cummings of Odenville, AL spun the Cummings Racing GRT in turn four on lap 19 to bring out the caution flag.

This caution period set up the restart that would get Johnson up to challenge Clem for the lead, and the crowd getting behind the kid. Behind Clem, Henderson chose the inside for the double-file restart, which put Johnson in third on the outside – just where he later said wanted to be. Johnson made short work of Henderson, passing him for the second when the green flag came back out.

Johnson pulled outside Clem, but he just wasn’t moving over to let the master by. Johnson gave up on the high side on lap 23 and crossed over to the inside. Johnson took the lead from Clem on the inside by just inches on lap 23. But Clem drove his car into turn three a car-length further than Johnson on lap 24 to retake the lead.

Competitors and fans alike were able to take a breath on lap 25 when Martin spun for a second time in turn two. The top ten for the double-file restart was Clem, Johnson, Cooley, Henderson, Morrow, Sitton, Conley, Gauldin, Edge, and William Thomas of Phenix City, AL in the Save More Special.

Cooley drove around the outside of Johnson to take second on the restart, and by lap 27, the pair of two-time NeSmith Late Model National Champions were camped out on Clem’s back bumper. The crowd went nuts watching Clem skillfully holding off Cooley and Johnson in the three-wide battle for the lead.

Just when the intensity meter was about to blow off the charts, the caution flag came out when Nathan Mayes of Springdale, AL stalled on lap 33. With Clem out front in a row all by himself, Cooley chose the inside for the double-file restart, as Johnson gladly pulled to his right on the outside.

Johnson cleared Cooley for the second spot in turn one when the green flag came out, and got a run on Clem going down the backstretch. In turn three, Clem’s tires struggled for grip and Johnson took the lead coming off the fourth turn. Cooley was able to get by Clem for second on lap 36, but by then, Johnson was gone. With ten laps to go, Johnson had a half straightway lead and took almost a full second margin of victory under the checkered flag.

The NeSmith Chevrolet Dirt Late Model Series Touring Division will next travel to Mississippi for a pair of 40-lap $2,000-to-win races over the Memorial Day Holiday Weekend. Whynot Motorsports Park in Meridian, MS will host the NeSmith Late Models on May 23, and they will be at Magnolia Motor Speedway in Columbus, MS on May 24.

OFFICIAL RESULTS OF ROUND 8 AT TALLADEGA SHORT TRACK IN EASTABOGA, AL ON 5/2/15: