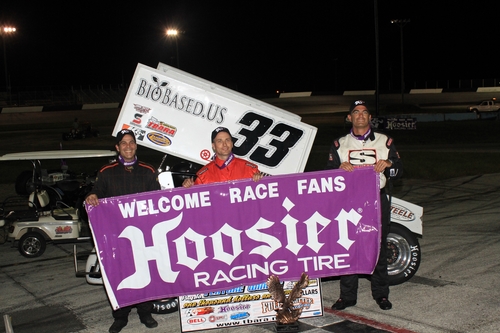 EAST MANATEE – Saturday night dozens of costumed kids were treated to autographs and free candy by the racers at the Full Throttle Speedway.  After the kids got their Halloween treats, and four kids bicycles were given away. the adults were treated to another night of exciting race action.

In the first of two 6-lap heats in the Legends division, Mike Verhaagh led from start to finish to beat out second place finisher, Kyle Capobianco and third place finisher, Robby Lyons. The second heat race saw Joey Azzata lead all the way ahead of Keith Sankula and Joey Langis.

The first Sprint Cars heat had a long delay after Joey Aguilar’s car caught on fire because of a fuel line rupture. Amazingly, Aguillar walked away even though he was covered in flames. Aguillar was airlifted to a nearby hospital where he was treated and released. He’s expected to be racing again sometime next month.

The feature races began with Sherry Best of Myaka City winning the 15-lap Rookie 4 race. Zach Rodgers of Clearwater finished in second after

Best passed him on the first lap. Marina Petty of Venice finished in third.

The 25-lap Legends feature was won by Joey Azzata of Boca Raton. Keith Sankula of Palm City closely trailed Azzata for most of the race to finish in second place. Kyle Capobianco of Spring Hill came in third.  “(After the restart) we went down into turn 1 and there was no break after turn1,” Azzata said.

The 30-lap Late Model Sportsman feature gave the race fans a really exciting finish. Aaron Williamson of Lakeland and Michael Atwell of Naples were side by side in the home stretch of the final lap. The cars touched just short of the finish line and right quarter panel of Williamson’s car was sheared off. Williamson maintained control and managed to edge Atwell for the win. Clyde Coyle of Sarasota finished third.  “It was a little rough,” Atwell acknowledged, “but it was a good race.”

The 30-lap TBARA Sprint Cars feature was a survival of both the fastest and the fittest. The race began with a field of 18 cars taking the green and ended with a field of 11. The field was quickly whittled down after a four-car pileup on turn 2 of lap 3. On lap 10 David Steele of Tampa took the lead from Scotty Adema of Fort Myers and they stayed at 1-2 for the rest of the race. Matt Alfonso came in third.  “It was a good run for us,” Steele said. “I want to thank my crew. Due to attrition, there weren’t that many cars.”  “It was our second time out,” Adema said. “and  our second  place finish,” Adema said. “There’s no shame in finishing second to David.”

The 25-lap Pro 4 feature had some spinouts, tapouts and caution flags before Ronald Robinson of Bradenton raced to victory ahead of Jesssica Ostrovskis of Bradenton and Kris Bridges of Venice.

“It’s not the way I wanted to win,” Robinson said. “There was a lot of beating and banging.” Robinson would not be able to pass the tech inspection after the feature, giving the win over to Jessica Ostrovskis, Kris Bridges second and Sklyer Null third.

Visit the speedway’s web site and stay up to date at www.fullthrottleracepark.com.