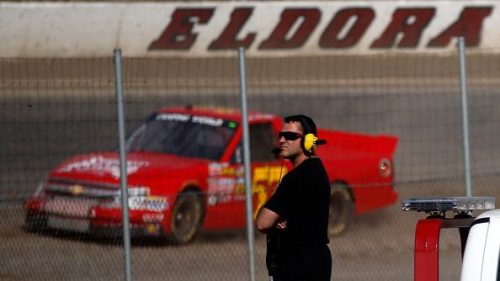 Slack said the charges leveled by Scott Bloomquist and four other Late Model drivers, who are seeking some $16.5 million in damages, are “meritless.”

“Our team at Eldora Speedway is amidst the final days of preparation for the Baltes Classic and the 46th running of the World 100 — our sport’s showcase event,” Slack said in a statement Monday. “As always, we are committed to providing a one-of-a-kind experience for our loyal fans, drivers and race teams. We will not be distracted by news of meritless lawsuits. Our legal team will deal with that and we will comment further at the appropriate time.”

According to a published report by Courthouse News Service, Bloomquist contends he won the Late Model Dream race at Eldora in June of 2015, only to be informed afterward by track and race officials that his car weighed in 21 pounds under the required minimum weight of 2,300 pounds.

The race was put on by the World Racing Group through UMP DIRTcar Racing.

Among other things, Bloomquist argued in his 16-page complaint that the scales used to weigh his car were faulty.

After believing he had won the race and the $100,000 top prize for doing so, the victory was awarded instead to the driver who had finished behind him –and Bloomquist won only $2,000 instead.

Tire samples collected from the cars of Bloomquist, Brandon Sheppard, Gregg Satterlee, Jimmy Owens and Ricky Thornton were “tested by an independent laboratory” and “did not meet established benchmarks in a chemical analysis,” according to the report.

In the lawsuit filed in New York, however, Bloomquist is seeking a total of roughly $16.5 million in damages because he “was deprived of cash winnings, fines, and as a result of the suspension levied by WRG, is deprived of the opportunity to race for three months impacting his ability to earn a living,” according to the lawsuit. “Further, his reputation, as a sports celebrity, has been damaged, which impacts his ability to market himself to fans and potential sponsors.”

The plaintiffs are represented by K.J. McGuire Jr. in Troy, New York.