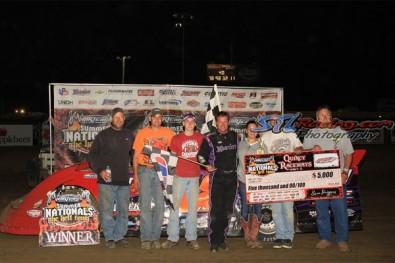 Babb, of Moweaqua, Ill., used the top grove to pick up spots early as he rallied from his fourth starting position to second in seven laps. Shirley, the early race leader, built a half-straightaway lead, but within three laps Babb was knocking on his door. The two series champions battled door-to-door lap after lap before finally on lap 15, Babb moved in front. Shirley maneuvered his way back to the lead on lap 21, but contact with a lapped car while trying to hold off Babb ended Shirley’s chances of winning. Babb recaptured the lead and pulled away from the field, securing the $5,000 checkered flag.

(Click here for news and information on the DIRTcar Summer Nationals.)