Clyde Hart was the patriarch of the New Smyrna Speedway, the man responsible for what New Smyrna Speedway is today and this Saturday we celebrate his memory with the annual Clyde Hart Memorial Super Late Model 100! This year the race returns to its familiar July 4th weekend spot on the calendar, after the tire shortage and weather issues cased it to be delayed to the World Series.

The Clyde Hart Memorial began in 1999 after the passing of Clyde Hart and as fate would have it the legendary David Rogers would win the inaugural contest! Over the years this event has been a staple of the speedway becoming one of the cherished crown jewels that all racers want to add to their resume. Wayne Anderson has the most wins in the event history, with 5. His last victory came back in 2011.

Many different stars have claimed victory in this event including Rogers, Anderson, Mike Fritts, Tim Russell, Jeff Choquette , Brad May and Rich Clouser. Some of the top NASCAR stars, including Kyle Busch have competed in this event! With a few putting their name on the list of winners; including Steven Wallace and our most recent Clyde Hart champion, William Byron!

No matter the year and no matter the circumstance the stars always come out for the Clyde Hart Memorial and this year will be no exception. The Florida Sunbelt Super Late Model Series made its return this year and the Clyde Hart Memorial will be race number 3 of the six-pack series. Brad May and Bobby Good have claimed wins this season, with May entering the event as the Series point leader. Will we see a 3rd different winner after the checkers fly this Saturday?

The LKQ Super Stocks will one again be in action as the rivalry between the Spears and Bobby Holley continues for another week (plus the American Auto Dash for Cash), The Central Florida A/C and Heating INC E-Mods return for the first time in a while, along with the explosive Bomber A division, Sportsman and Ground Pounders too!

All this for just $20! Join us this Saturday at 7:30 as we write the next chapter in the Clyde Hart Memorial history book! 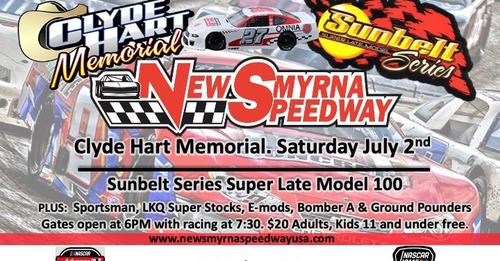 10:30 AM TEAMS THAT ARE SIGNED IN MAY PICK OUT RACE TIRES IN THE TIRE BARN

11:30 TEAMS MAY PICK OUT PRACTICE TIRES

RACE TIRES WILL BE IMPOUNDED. TIRE PURCHASE NOT MANDATORY BUT TIRES NOT PURCHASED ON RACE DAY ARE SUBJECT TO TIRE SAMPLING.

PIT GATES OPEN FOR ALL OTHER CLASSES AT 3:00

SLM QUALIFYING 6:30
SLM will be impounded on pit road, then stage on front stretch for driver intros.

Races for June 4th have been C

Driver of the Week Voting Now