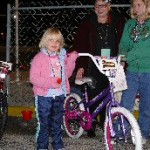 Every Saturday night at Auburndale Speedway, as families make their way from the ticket window to the grandstands, each child ten years of age and under is given a special ticket. At intermission, numbers from those tickets are called and two lucky youngster receive a fantastic gift packet while several more get a free ice cream, or, has been the case with the cold weather, cup of hot chocolate.

The program is called “Lindsey’s Little Racers,” named for its founder Lindsey Bruce. Each week she and her family work diligently to see that the kids have a great time at the race track.

The beginning started in August 2000 with Lindsey and her dad going to races together as father and daughter bonding. Lindsey’s dad knew alot of the drivers, the staff, and the owners of the track. Lindsey had befriended a staff member’s young son who loved to collect race cars. Lindsey came home and went thru her racing stuff and found a car that she had two of. The next week she gave it to the young boy. He got so excited that Lindsey had given him the car.

Lindsey came home that night feeling proud that she made a difference in the young boy’s life. Of course the young boy had to tell his friends about what Lindsey had done. So the next week his friends asked her if she had anything else they could have. 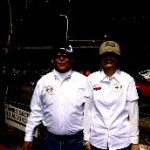 On the way home that night, Lindsey asked her dad if he had any extra race cars or cards that she could give to the boys… and there you have the beginning of Lindsey’s Little Racers.

After a few weeks the whole family got involved. Lindsey’s mother started shopping around for race items. Her dad went to a few businesses that gave him stickers, pictures, cars, and hats to give away. The owners of Auburndale Speedway loved this and the “Just For Kids Program” was started.

In 2007, the drivers came on board sponsoring ice cream, toys, and bicycles to give away. Since taking over the track, owner Rex Guy, his family and staff have been overwhelmingly supportive.

The program continues into the 2010 season and is now known simply as “Lindsey’s Little Racers.” Precision Air has come on board as a corporate sponsor this season and prizes have been donated so far by the legendary Bobby Allison along with such well-known names as “The First Mom of NASCAR,” Martha Nemecheck. The Car Doctor, Narramore’s Machine Shop, Mini Stock Champion Fred Harrison, Jr. and several others have stepped up to purchase the ice cream for the kids.

The Bruce’s have secured a number of quality memorabilia items that are being raffled off to the crowd each week with the money being raised going to purchase bicycles to give away. The first pair of bikes (one boys and one girls) will be given away on Saturday, March 20th during the racing action which will be headlined by the F.A.S.T. Late Model Series. It is hoped that a pair of bikes can be given away at least once a month.

Last years downturn in the economy kept the bike giveaway program at a minimum, but this year things are looking better.

“We have to remember that the kids are the future of this sport, whether as future fans or even drivers,” says Julius Bruce. “If they have a fun night at Auburndale, they and their parents will be back again and again. It’s a win-win situation for everybody,” he says.

If you would like to sponsor “Lindsey’s Little Racers”, you can contact Julius or Lindsey Bruce at 863-293-0963 or by e-mail at jbruce2@tampabay.rr.com. Or you can just see Julius, Lindsey or announcer Dave Westerman at Auburndale Speedway on Saturday night if you want to get involved… and parents, make sure to bring the kids!!