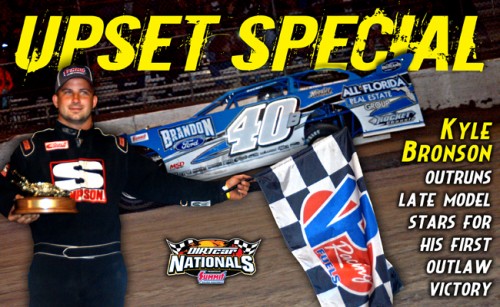 A 23-year-old open-wheel Modified standout in the Sunshine State, Bronson joined Thursday-night victor Casey Roberts of Toccoa, Ga., as unexpected first-time WoO LMS winners during the 43rd DIRTcar Nationals Presented by Summit Racing Equipment. His $10,500 triumph in the finale of the mid-winter motorsports meet also was the second of the week for a home state driver following the win by Ivedent Lloyd Jr. of Ocala, Fla., in the DIRTcar Racing-sanctioned event on Feb. 17.

“This is unbelievable,” said Bronson, whose win came in the just the eighth Super Late Model start of his fledgling racing career. “I’ve never doubted myself, but I dang sure didn’t think I was gonna come here and win the race. If you would’ve asked me (about winning a WoO LMS event) a couple days ago, I would’ve told you that you were crazy. We had our goals set (for the DIRTcar Nationals) to try and make all of (the features).

“I don’t know what to say. I’m so excited I don’t even know how to show it right now.” END_OF_DOCUMENT_TOKEN_TO_BE_REPLACED 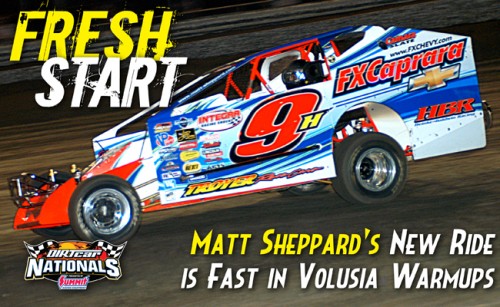 “To come down here and win the biggest race, come right out of the box, it means a lot to this team,” Sheppard said of Saturday’s 50-lap Super DIRTcar Big-Block Modified Series race at Volusia Speedway Park. “I can’t thank all the guys over here with HBR enough. They’ve been working their tails off all week on both cars and I think it showed tonight. We got the cars better every night. We’re going to be a force to be reckoned with this year.”

Sheppard started the race from fourth and his HBR teammate Jimmy Phelps, of Baldwinsville, N.Y., started on the pole. Phelps led at the green flag, but Frenchtown, N.J. driver Billy Pauch was quick to make his move from second. Pauch cruised around the outside lane, passing Phelps before the leaders reached the backstretch. END_OF_DOCUMENT_TOKEN_TO_BE_REPLACED 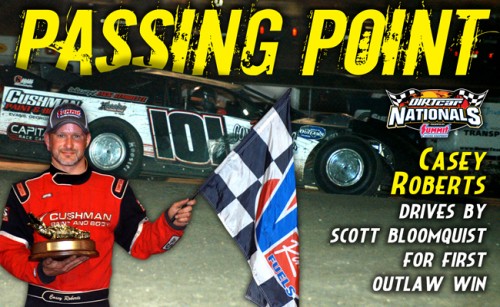 But when the checkered flag flew on the fourth race – Thursday night’s 50-lap World of Outlaws Late Model Series A-Main – the unheralded 36-year-old driver from Toccoa, Ga., was first across the finish line.

Roberts pulled off one of the biggest upsets in the history of the DIRTcar Nationals by Summit, passing dirt-track legend Scott Bloomquist of Mooresburg, Tenn., coming to the white flag to become the mid-winter motorsports meet’s third first-time dirt Late Model winner in four events.

Refusing to concede after losing the lead to Bloomquist on lap 31, Roberts patiently stuck to the bottom of the half-mile oval and slipped ahead of Wednesday night’s DIRTcar Late Model feature victor to gain command as lap 49 was scored. The Peach State racer then staved off a last-ditch bid by Bloomquist to score his first-ever WoO LMS triumph by a mere. 0.185 of a second.

Roberts’s dramatic drive to a win worth $10,550 ignited the large Volusia crowd, which gave the consummate underdog a rousing welcome when he emerged from his Cushman Motorsports Capital Race Car in Victory Lane.

“I’m pretty much a no-name or whatever,” Roberts modestly said while standing on the homestretch stage following the race. “I guess everybody thinks it’s good to see guys like me win.  “I’ll tell ‘ya, I’m just blessed to be here. It feels like it’s not even really happening.” END_OF_DOCUMENT_TOKEN_TO_BE_REPLACED 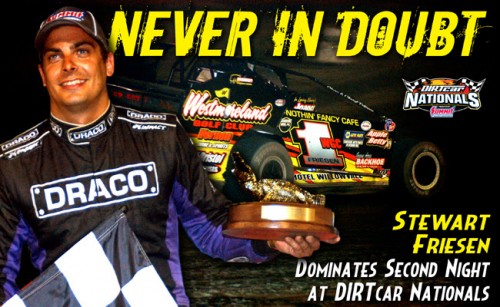 “We were very happy to win tonight,” said Friesen, whose last Super DIRTcar Series victory was the World of Outlaws World Finals finale last November. “We had a great race car.”

Thursday’s win launched Friesen’s event point standing from seventh to second, putting him that much closer to winning the big gator trophy.

Friesen led from the green flag Thursday after winning his heat race and redrawing this first spot on the starting grid. Aussie driver Pete Britten, who gave Haers a run for his money Wednesdaybut finished seventh, shared the front row with Friesen at the initial start and held on to second as Friesen pulled ahead to lead.

Haers came up third and Billy VanInwegen fourth. Behind them, Billy Pauch, of Frenchtown, N.J., and Mario Clair, of Drummondville, Quebec, were quickly making moves to push their way forward. Pauch passed VanInwegen in lap 1 and by lap 4 Clair was close behind. END_OF_DOCUMENT_TOKEN_TO_BE_REPLACED 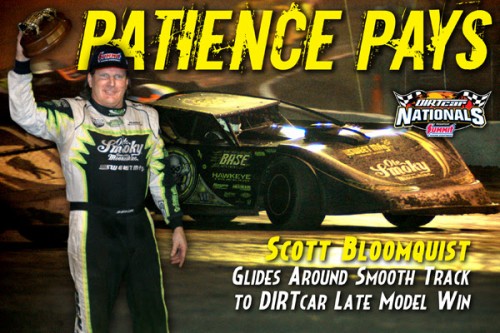 Making his first start in a new car he designed in a collaboration with noted parts manufacturer Randy Sweet, the 50-year-old superstar from Mooresburg, Tenn., mastered the sprawling half-mile oval to capture the 40-lap A-Main that closed the DIRTcar Late Model portion of the 43rdannual DIRTcar Nationals Presented by Summit Racing Equipment.

Bloomquist swept past fellow Hall of Famer Billy Moyer of Batesville, Ark., for the lead on lap 20 and never looked back in the caution-free event. He pocketed $10,000 for his ninth career win during the DIRTcar Nationals by Summit.

“The racetrack was awesome tonight,” said Bloomquist, who began the six-night full-fender meet at VSP with finishes of sixth (Monday) and fifth (Tuesday). “It’s a little different when you just don’t sit out there and have everybody hold it on the floor all night. You gotta have a little bit of foot, a little bit of patience.” END_OF_DOCUMENT_TOKEN_TO_BE_REPLACED 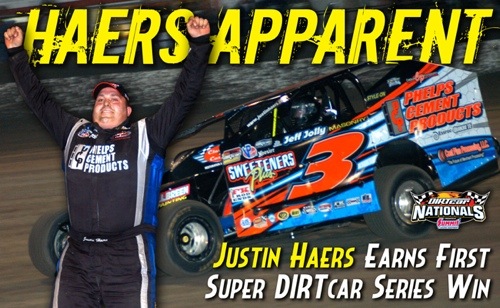 “I’m so excited. This has been a long time coming,” said the Super DIRTcar Series regular of ten years. “We’ve been close so many times, even down here last year. It’s just awesome to get a win down here. We came down here just to be competitive, and to get a win is just awesome.”

END_OF_DOCUMENT_TOKEN_TO_BE_REPLACED 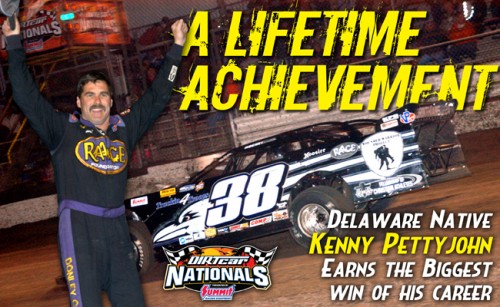 BARBERVILLE, FL – Feb. 18, 2014 – Kenny Pettyjohn was almost at a loss for words after driving away from a star-studded field to capture Tuesday night’s 30-lap DIRTcar Late Model A-Main during the 43rd DIRTcar Nationals Presented by Summit Racing Equipment at Volusia Speedway Park.

A 46-year-old veteran from Millsboro, Del., who has been slinging cars around dirt tracks for nearly 30 years, Pettyjohn was victorious for the first time in more than a decade’s worth of February trips to the sprawling half-mile oval outside Daytona Beach.

“Shoot, I can’t believe I’m standing here,” Pettyjohn said after emerging from his Rocket Chassis machine in Victory Lane. “I think this tops every race that I ever won in my life. To a lot of these guys this wouldn’t be that big a deal, but for me this took a lifetime.” END_OF_DOCUMENT_TOKEN_TO_BE_REPLACED 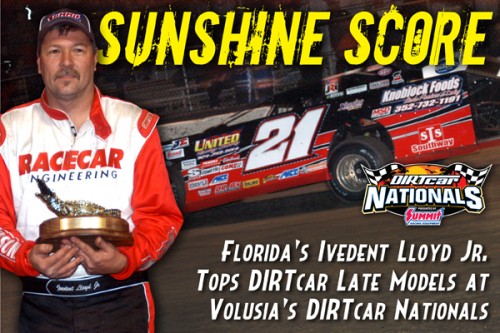 The 47-year-old veteran from Ocala, Fla., authored one of the drives of his career, turning back a field filled with national stars to win the 30-lap DIRTcar Late Model A-Main that opened the full-fender portion of the 43rd DIRTcar Nationals Presented by Summit Racing Equipment.

An accomplished Sunshine State racer who has won often in local and regional competition at the half-mile oval, Lloyd became the first driver from Florida to capture a dirt Late Model feature during the DIRTcar Nationals by Summit since Jacksonville’s Earl Pearson Jr. topped a DIRTcar-sanctioned event on Feb. 10, 2009. He earned $7,000 for his efforts.

“This is the biggest win,” said Lloyd, who has driven Late Models on both dirt and asphalt for three decades. “There’s races that pay more money, but this is by far the career-topper, to win this. To have all these guys here and race these guys, it’s neat.” END_OF_DOCUMENT_TOKEN_TO_BE_REPLACED 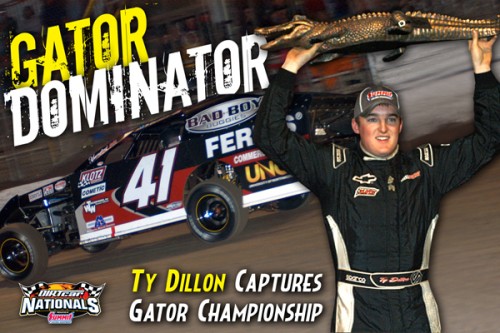 BARBERVILLE, Fla. – Feb. 17, 2014 – Ty Dillon has dominated the DIRTcar Nationals presented by Summit Racing Equipment this year, and on Monday night at Volusia Speedway Park he earned his biggest victory of the week when he led wire-to-wire in the Gator Championship for DIRTcar UMP Modifieds.

Monday was Dillon’s night, though. He drew the outside pole for the 30-lapper alongside Kenny Wallace and quickly jumped in front. Dillon methodically edged away lap-after-lap until a mid-race caution bunched the field. Ty Dillon charged back to green with Nick Hoffman, Wallace and Matt Westfall in tow. Austin Dillon, Ty’s brother who won the Daytona 500 pole and was seeking his second win in as many nights, quickly picked off Westfall and Wallace and set his sights on Hoffman as he tried to catch his brother in front. END_OF_DOCUMENT_TOKEN_TO_BE_REPLACED