It was in mid-April 1974 that Orlando SpeedWorld’s oval race track started operation and Friday night’s season opener will mark the beginning of the 40th anniversary celebration for the three-eighths-mile facility that has hosted weekly racing events, major sanctioned races from the likes of USAC, All-Pro, Florida Pro Series and many more plus the ever-popular Crash-A-Rama shows.

The adjacent drag strip began operating ten years earlier, in 1964, and both were initially built and owned by Billy Herndon before being purchased by Clyde Hart in late-1987. Clyde’s son Robert continued to operate the facility until last year when Ozzy Moya took over the reigns.  The first race held on the oval track was a Limited Sportsman event won by the late Ed Meredith in a 1965 Chevy Chevelle. The big race on opening day was for Late Model stock cars and was won by the late Gene Johnson of Fort Pierce.

Johnson’s stepson, Doc McKinney, still competes at SpeedWorld to this day.  After a somewhat dismal 2013 plagued by some unforeseen management issues and terrible weather, SpeedWorld is bouncing back with a vengeance this year.  Moya has named Donnie Vivier as General Manager and he will oversee day-to-day operations of the track as well as helping promote the drag strip. Vivier recently operated the highly successful Central Florida Racing Complex in South Orlando. CFRC opened its doors in 2009 as the Central Florida Road Course, and as it evolved, it developed into an autocross and drifting course as well as a one-eighth-mile drag strip. END_OF_DOCUMENT_TOKEN_TO_BE_REPLACED

Nichols All the Way in TBARA Sprints at Orlando Speedworld 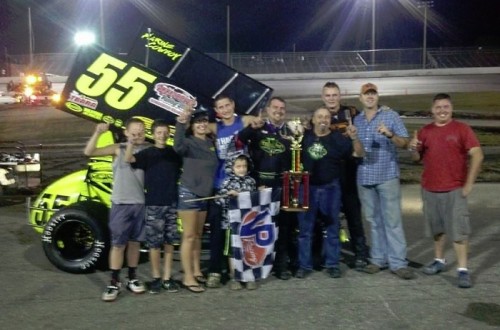 Orlando SpeedWorld wrapped up calendar year 2013 with a great evening of racing in front of a nice crowd on a very balmy night weather-wise for early December while much of the country was in a deep freeze.  The TBARA Sprint Cars finally got to run their program that was postponed by rain in June and 15 teams came out to support the event.  Fifteen-year-old Garrett Green looked like a veteran in winning heat race number one after early leader Tommy Nichols’ car partially lost power with two laps to go.  Joey “The Ace” Aguilar took the checker second with Nichols hanging on for third.  The second heat race was dominated by Leesburg’s Dude Teate who led every lap to finish in front of Ben Fritz and John Gilbert, Jr. Gilbert would later turn his mount over to Mickey Kempgens for the feature race.

The 30-lap finale had local Titusville driver Rex “Boneman” Hollinger on the pole for the start.  For Hollinger, a regular here in various classes in recent years, it was his first-ever SpeedWorld start in his Sprint Car.  At the drop of the green it was Tommy Nichols who grabbed the early advantage from the outside pole but Hollinger made a good account of himself settling into second spot.  Mark Gimmler made a pass on Hollinger but was well behind the leader at that point as Hollinger was nicely holding off many of the “heavy hitters” from third position. END_OF_DOCUMENT_TOKEN_TO_BE_REPLACED

THE CRASH-A-RAMA SERIES RETURNS TO ORLANDO!

Black Friday has become a day full of shopping carts crashing and wallet-deflating craziness, but Orlando SpeedWorld has just the cure for folks who have been out in the shopping madness all day…. A night of motorized mayhem called Crash-A-Rama.

Yes, Crash-A-Rama returns in its traditional day after Thanksgiving time slot and this is expected to be one of the biggest and best shows yet. For the second time this year, School Bus Figure 8 racing returns or Orlando SpeedWorld, but the buses are just a small part of the action. Orlando Speedworld is, and always will be, the original home of Crash-A-Rama.
This is a traditional night full of crazy and unique-style races that time and time again give fans the entertainment they know and love. Started several years ago as a one-time School Bus Demolition Derby (that packed the house), track owner Clyde Hart figured out that he could have the buses race rather than destroy each other which would allow for them to be used multiple times rather than just in one Demo Derby. Eventually, more smash & crash events were added and Crash-A-Rama was born! As usual, this Friday’s event will focus on giving race fans something new and different will be sure to be one for the ages. END_OF_DOCUMENT_TOKEN_TO_BE_REPLACED 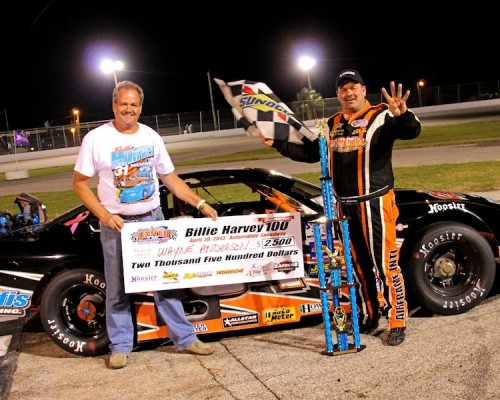 It was announced today that Jimbo Chadwick of New Smyrna Beach, FL has been named to fill the vacant General Manager position at Orlando SpeedWorld.  Chadwick has a long background in racing, starting as a driver at South Florida tracks, then by operating Chadwick Race Cars, Inc. in Pompano Beach from 1986 through 1997.  After moving to North Carolina, Chadwick ran a marketing and promotions company called Showtime, Inc., building show cars and promotional items for such NASCAR Sprint Cup teams as Hendrick Motorsports, Roush Racing and Penske Racing.  Now, after returning recently to Florida, Chadwick will take on the job of actually running a race track for the first time but says he is up to the challenge.  Plans are to run an open practice on Friday evening, August 23, with the first scheduled racing event to take place the following night, Saturday, August 24.  Classes that to be in action that night will be made known early next week so teams will have ample time to prepare.

Orlando SpeedWorld has been undergoing a restructuring and will re-open on August 3 with theTBARA Sprint Car program rained out in June as the featured attraction. Bob Watson, formerly of Lee USA Speedway in New Hampshire, has taken over the reins as General Manager and will be bringing a number of changes to the SpeedWorld facility in order to present a “family friendly” show for the fans.

A firm schedule has not been set as of yet, but plans are to move all racing activity to Saturday nights. Watson says that in a conference call this week with himself, track owner Ozzy Moya and New Smyrna Speedway owner Robert Hart, Hart gave his blessing to moving the SpeedWorld show to Saturday night. Schedules will be set so that no conflicts will exist between the scheduling for the two tracks. SpeedWorld will hold two open practice sessions on Wednesday evenings, July 24th and 31st before returning to racing action on August 3. On the schedule along with the Sprint Cars will be the Legend Cars, Super Stocks, Strictly Stocks and Bandoleros. Further details will be made available shortly.

The rain finally held off for once at Orlando SpeedWorld and fans were treated
to some good NASCAR Whelan All-American Series racing on a warm, muggy night.
The Modified class was top bill of the evening going for 50 laps in their
feature.  Earl Beckner of Orlando was quickest in time trials turning a lap at
14.62 seconds just ahead of Lakeland’s Josh Todd who turned in a lap at
14.78.
Pole sitter Roger Benton grabbed the early lead and was looking strong until
Shain Held went for a spin on lap two off the bumper of Todd’s machine.  Todd
was sent to the rear of the field for the restart while Held got his spot
back.  Benton continued to lead the way but began to get pressure from
Beckner.  On lap ten, Beckner dove low into turn three to try and make a pass
and just barely touched the left rear tire of Benton’s car sending Beckner
into a wild slide.  Beckner restarted the event from the tail of the field.
On the restart, Benton’s car began to slide backwards, victim of a cut tire
from the incident with Beckner.  Todd moved his car to the front and began to
check out.  Lap 22 saw Beckner, his teammate Jason Vail and Matt Wheeler lock
horns in turn four.  There was no significant damage and all three continued.
Just as the field got the halfway signal on lap 25, Wheeler tangled with Matt
Jarrett on the front stretch and hit the wall.  The crash eliminated both
drivers from the race while Vail also took his car to the sidelines. END_OF_DOCUMENT_TOKEN_TO_BE_REPLACED

Orlando SpeedWorld hopes to finally catch a break from Mother Nature this Friday night so that NASCAR Whelan All-American Series action can continue.  With several inches of rain dumped on the facility the past couple of weeks, drying out has been a slow process but some extra sunshine and a better forecast for this Friday evening have been more than welcome.
This week the Modified class has their turn at a 50-lap shootout that should produce some great competition with top drivers like Earl Beckner, Shain Held, Matt Wheeler and more expected in the field.  Also on the card will be the Pro Late Models, Sportsman cars, Super Stocks, Strictly Stocks and Bandoleros.
Pit gates open at 4 pm with grandstands open at 6 pm.  Adult admission is $12 with all kids 12 and under admitted free.

Everyone is hoping that the tropical system affecting Florida this week will continue to move swiftly off to the northeast so that Orlando SpeedWorld can get back to NASCAR Whelan All-American Series action Friday night. Disappointing is the only way you could describe things last Saturday as the pits were full with racers and fans were filing in for what looked to be a fantastic program. Seventeen TBARA Sprint Cars were already in attendance with a few others waiting in the wings checking the weather before what started as a brief shower turned into a full-blown sea breeze collision that dumped at least two inches of rain, forcing cancellation of the program. The event will be made up on Saturday, July 27. This week, the Super Late Models return to competition and will be joined by the E-Modifieds, Pro Trucks, Super Stocks and Strictly Stocks. Pit gates open at 4 pm with grandstands open at 6 pm. Racing begins at 8 pm. Adult admission is $12 with kids aged 12 and under free of charge.

Orlando SpeedWorld holds racing on Saturday night this week for the first time
in 2013 and race fans will get to witness a number of different types of cars
in action.
For the first time in about four years, the Tampa Bay Area Racing Association
(TBARA) Winged Outlaw Sprint Cars will be turning laps around the high-banked
3/8 mile SpeedWorld track and open-wheel race fans will also get to see the
Florida Midget Auto Racing Association (FMARA) Three Quarter Midgets as well,
a class that has not turned a wheel here in over ten years. Also on the card
are the Legend Cars, Mini Cup racers, Bandoleros and big extra-distance, extra
cash races for both the Super Stocks and Strictly Stocks. To provide icing on
the racing cake, the night will end with a demolition derby.
The TBARA Sprints are expecting a good field of between 22 and 26 cars but all
of the drivers feel they have just one guy to try and beat… Dave Steele of
Tampa and his “Silver Bullet” No, 33 car. Steele won the season-opening TBARA
show at Full Throttle Speedway near Bradenton and has been dominating Sprint
Car activity at Showtime Speedway in Pinellas Park. END_OF_DOCUMENT_TOKEN_TO_BE_REPLACED 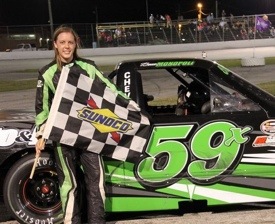 The ladies dominated Pro Truck qualifying with Becca Monopoli setting quick time over Whitney Poole. The pill draw saw the two reverse starting positions for the big feature race as Poole started from the pole with Monopoli on the outside of the front row. Monopoli snared the early lead while Gerald Campbell moved up to challenge Poole and made a pass for second on lap four. The race stayed green until John Hodge, subbing for Zach Curtis, spun off turn two on lap 21. On the restart, Campbell turned up the wick and led the 22nd lap only to see Monopoli back out front on the following lap. END_OF_DOCUMENT_TOKEN_TO_BE_REPLACED