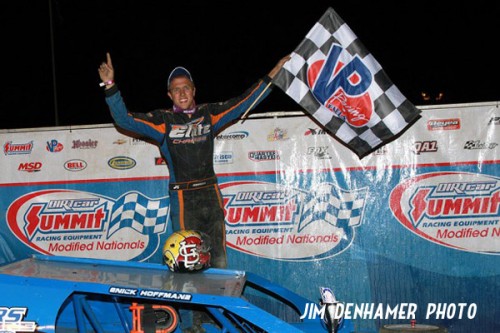 WAUSEON, Ohio – July 15, 2016 – Nick Hoffman had some work to do in the opener of the first ever DIRT Summit Racing Equipment Modified Nationals double-header at Oakshade Raceway on Friday night as had to battle past a hard-charging Brian Ruhlman and Cory Daugherty to score his series-leading fifth win of the tour.

The current points leader started back in the field but made easy work of several of his competitors. Cory Daugherty put up a several lap fight but Hoffman battled around. Then he started to reel in Ruhlman as Ruhlman closed in on the tail of the field.

Through traffic, Ruhlman opened a lane on the bottom for Hoffman to get around. Ruhlman tried to run him back down but Hoffman held him off. Through the closing laps and a late restart, Hoffman continued to be the class of the field.

“That was a huge stepping stone toward this deal,” said Hoffman, of Mooresville, N.C., about his pursuit of the DIRTcar Modified Nationals championship “After last night, I thought we had a really good piece and then made the wrong adjustments before the feature and just got our butt kicked. We were really good tonight. Ruhlman ran me hard in the feature but I knew I had the perfect racecar for this type of condition. We’ve just got to get another one tomorrow, keep everything in one piece and see what we can do.” END_OF_DOCUMENT_TOKEN_TO_BE_REPLACED 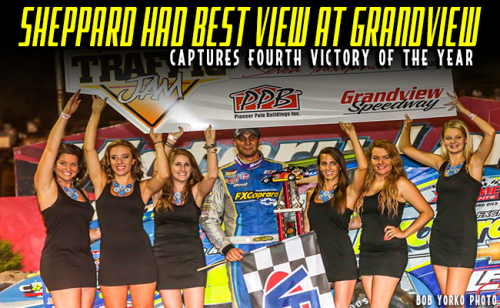 Sheppard, who started the feature on the front row with Pete Britten, jumped out to the lead early. Despite lapped traffic, Sheppard was strong from the start to finish.

Sheppard, driver of the No. 9s FX Caprara Big-Block Modified was all smiles in victory lane.

“This car has been so good,” Sheppard said. “We were a little tight tonight but it’s still a great racecar. It had enough grip to keep it going. Starting position was key tonight and starting on the pole helped.”

Sheppard was running the top lane early on but chose the bottom lane on a lap 22 restart with Craig Von Dohren beside him; it was Sheppard who powered forward. END_OF_DOCUMENT_TOKEN_TO_BE_REPLACED

Five Mile Point is a Piece of Cake For Sheppard

Sheppard Caps off his Birthday with a $6,000 Victory 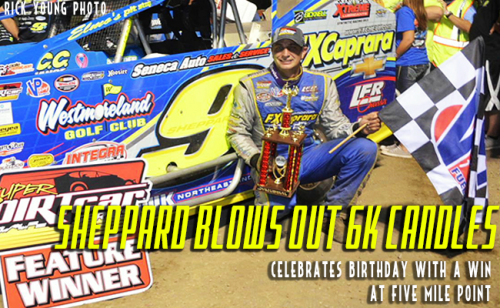 KIRKWOOD, N.Y. – July 12, 2016 – Five different drivers captured the lead in the hard fought 66-lap main event at Five Mile Point Speedway, but it was the birthday boy Matt Sheppard who made a late race charge from his eighth starting position to secure his third Super DIRTcar Series victory of the season.

“I think we had a better car tonight than last week. This thing was just rolling tonight,” said Sheppard, the current points leader and defending champion.

Billy Decker and Larry Wight helped kick off the feature as they jumped ahead of the field and battled for an early lead.

Wight caught lapped traffic on lap 25 as Decker and Frank Cozze closed in.

It wasn’t just Decker and Cozze who were knocking on Wight’s doors as they caught lapped traffic. There were five drivers: Wight, Decker, Cozze, Friesen, and Sheppard who were all battling for the top spot on lap 32. END_OF_DOCUMENT_TOKEN_TO_BE_REPLACED

The Series Returns to Action on Tuesday at Plymouth (Ind.) Speedway 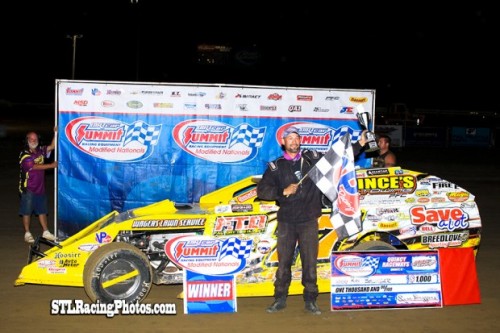 Bollinger started on the feature pole and fought a fierce battle early with Kenny Wallace. Just before the midway point, Wallace took the lead as the two drivers worked their way through traffic. Wallace built the gap on Bollinger but as he worked to get around a lapped car, Wallace caught a tire on the bottom of the track and lost the lead with a damaged car.

Bollinger, back in the lead worked to hold off Michael Long through the closing laps. The win was the third of the Summit Modified Nationals season for Bollinger.

Long finished in second with Ray Walsh in third. Wallace closed out the night with a 16th place finish. END_OF_DOCUMENT_TOKEN_TO_BE_REPLACED

Harrison Picks up his Second Win of the Season 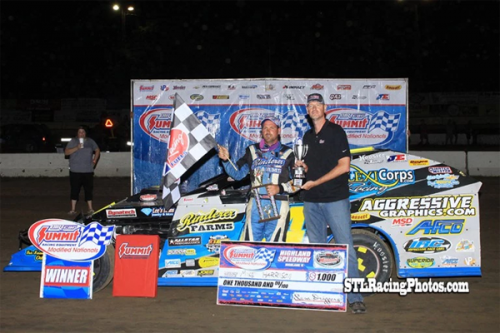 When the green flag fell, Harrison jumped out to an early lead with Bollinger hot on his tail. Bollinger, searching for a line. About midway through the feature, Bollinger found the line and got around Harrison.

The reigning series champion was not done though as he kept up the pressure on Bollinger. Thorugh a late restart, Harrison stayed tight and on the final lap, Harrison made contact with Bollinger down the back straight sending Bollinger into the wall. Bollinger was forced to retire for the night. 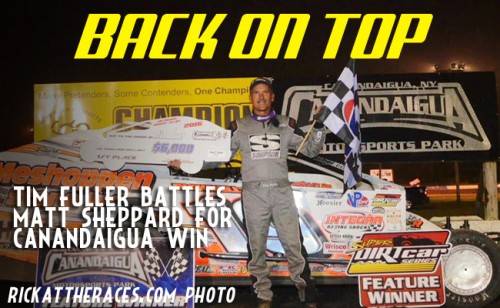 “The car was really good tonight. Matt is really good and to be able to run with him throughout the year has helped. If I could finished second to Matt that would be like a win,” said Fuller in victory lane after taking home the $6,000 payday.

Gary Tomkins, who led the 30-car field to the green flag, found himself in second before scoring the first lap as Brett Hearn, the outside pole sitter, took flight outside of turn three and gained the lead. Behind Hearn, Tomkins and Sheppard battled back and forth for second place. Sheppard took over second place by lap four. END_OF_DOCUMENT_TOKEN_TO_BE_REPLACED 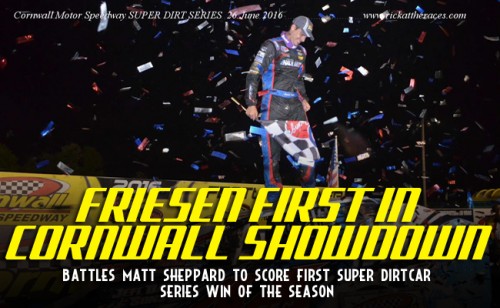 Friesen, who took the lead on the initial start from pole-sitter Max McLaughlin, was able to capture the Mel Valade Backhoe Service 100 lapper, but not without a hard fight by fourth-place starter, Matt Sheppard.

“What a racecar,” Friesen said in victory lane. “Those cautions drive me crazy. When you pass Matt Sheppard back, that’s really something. He’s on top of his game right now.”

The initial start saw Friesen pulling away from the pack on the topside of the track while McLaughlin and Sheppard battled for second position.

It didn’t take long for Friesen to find himself in traffic as he caught the back of the pack by lap 12. He got bottled up on the top of the speedway and Sheppard went to the bottom of the exit of turn four to snatch the lead away.

Friesen was able to take back the lead but only to be halted by a yellow. 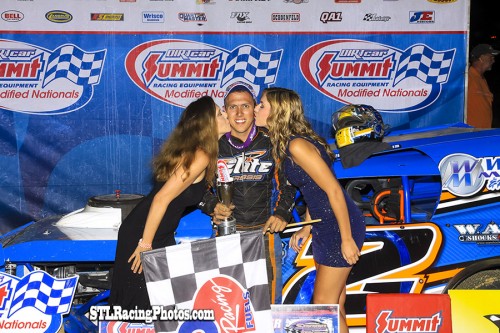 Hoffman, from Mooresville, N.C., jumped out to an early lead over Brent Mullins in the feature. Through three cautions, Mullins, who had his hands full with Allen Weisser, tried to run down Hoffman but was unable to close the gap.

Mullins finished second with Weisser in third, Kelly Kovski in fourth and Ray Bollinger in fifth. Nathan Balensiefen was the night’s hard charger. 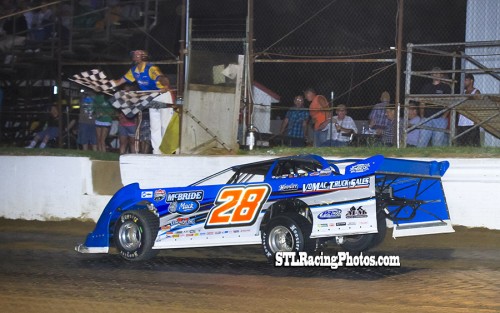 CANTON, Ill. – June 23, 2016 – Dennis Erb Jr., fresh of his win at the Dirt Late Model Dream, came into Thursday night’s DIRTcar Summer Nationals at Spoon River Speedway with the wind at his back and did it ever show.

Erb cruised to a dominant victory over Billy Moyer and Bobby Pierce in the 50-lap feature and scored the $10,000 payday.

“I didn’t know if it was easy or not,” Erb said. “The car was good and I didn’t see anybody challenge me there. We were able just to get out front and I didn’t feel no challenge, so I just kept driving my line.”

Erb started the feature on the pole and and easily pulled away from Moyer through the opening half of the feature. A caution flag flew on lap 28, but Erb maintained when the feature returned to green. Through traffic in the closing laps, Moyer tried to close the gap on Erb but was unable to make a move.

The win was the 20th Summer Nationals victory of Erb’s career.

Pierce charged through the field and battled past Mike Marlar to finish in third. He added to his Summer Nationals points lead. END_OF_DOCUMENT_TOKEN_TO_BE_REPLACED 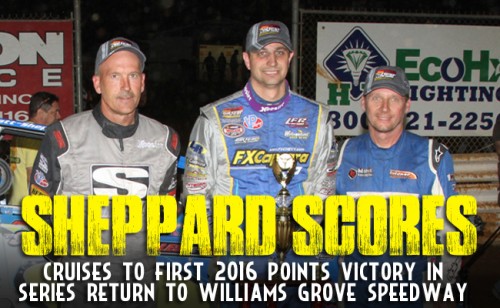 (By Mandee Pauch) MECHANICSBURG, Pa. – June 22, 2016 -Tim Fuller led early at Williams Grove Speedway on Wednesday night, but it was Matt Sheppard who battled to the lead and was dominant through much of the 100-lap Modified Mayhem at the Grove Super DIRTcar Series Big-Block Modifieds feature.

In the series’ first return to the track in a decade, Sheppard became the sixth different winner in six Super DIRTcar features run at the track since 1989. The defending series champion was able to lead the last 47 circuits to score the Modified Mayhem $6,000 top prize.

“The track started locking down a little bit there early. I just tried to ride it out and drive it nice and straight,” explained Sheppard in victory lane. “The guys in front started to get slower in the long runs and we maintained. I think that’s what won us the race tonight. Once we got up front I just wanted to hit my marks and take it easy.” END_OF_DOCUMENT_TOKEN_TO_BE_REPLACED