Gravel Battles Rain, Restarts for Prelude to the Ironman Win

Scores His Second Straight Win and Seventh of the Season 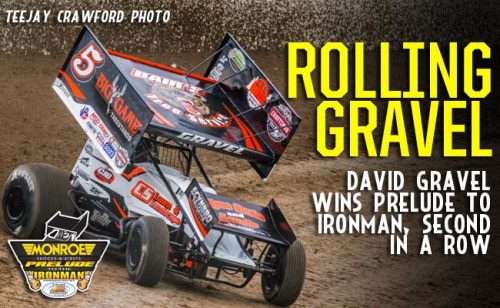 PEVELY, Mo. – Aug. 5, 2016 – Neither rain nor restarts could dampen David Gravel’s Friday night as he dominated the Monroe Shocks and Struts Prelude to the Ironman at Federated Auto Parts Raceway at I-55 and scored his second straight and seventh overall World of Outlaws Craftsman® Sprint Car Series victory of the season.

Off-and-on light rain fell on the 1/3 mile, bullring in Pevely, Mo. throughout the feature, but Gravel was the class of the field in his No. 5 Big Game Treestands machine. Multiple restarts hit in the middle of the 35-lap main event, but Gravel held off the competition behind and cruised to the finish. He has led the last 75 laps of World of Outlaws competition.

“We’re really rolling right now,” Gravel said in victory lane. “It was a really fast race track around the top and the rain made the top even better and tighter as the race went on… We’ve won a rain-shortened race so you don’t want to get too many of those. You want to earn them. You needed that 35-lap workout because 55 laps tomorrow is going to be tough, for sure.” END_OF_DOCUMENT_TOKEN_TO_BE_REPLACED 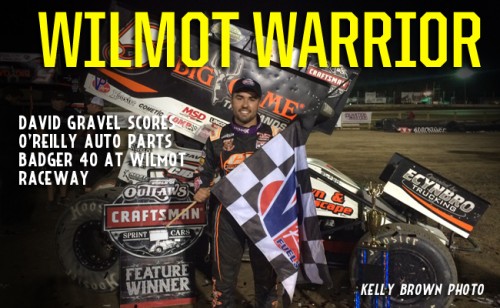 WILMOT, Wisc. – July 30, 2016 – David Gravel has been under the weather over the course of the last week, but he didn’t let that slow him down on Saturday night in the O’Reilly Auto Parts Badger 40 at Wilmot Raceway in Wisconsin. The native of Watertown, Connecticut, led all 40 laps to claim his sixth World of Outlaws Craftsman® Sprint Car Series win of the season.

Gravel has now won in both of his starts with the World of Outlaws Craftsman Sprint Car Series at Wilmot Raceway and has 13 career wins with the series.

“It’s been a rough last six or seven days for me and I’m just starting to feel better,” said Gravel, who drives the Big Game Treestands machine for CJB Motorsports. “The car was just awesome. I’ve only had one other car ever that has driven perfect like that. There was a lot of yellows and that gave Donny (Schatz) a lot of shots at me and chances to try to change it up a little bit.” END_OF_DOCUMENT_TOKEN_TO_BE_REPLACED 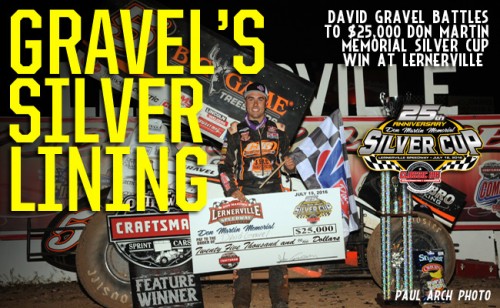 SARVER, Pa. – July 19, 2016 – Donny Schatz did not make it easy, but David Gravel proved up to the task as he battled to his fifth World of Outlaws Craftsman® Sprint Car Series victory of the season in the 25th Annual Don Martin Memorial Silver Cup at Lernerville Speedway on Tuesday night.

Gravel started from the front, but did not have an easy road as Schatz moved forward early and then began challenging the Watertown, Conn.-native for the lead. Through lapped traffic, Schatz closed the distance and then battled by Gravel. Gravel kept up the pressure though and, the next lap by, was in position when Schatz bobbled on the cushion. He took back the top spot and held off challenges through the end of the 40-lap feature.

“Donny is really good – Dale (Blaney) and Donny at this type of race track,” Schatz said. “I tried to keep my pace up as good as I can but it got harder and harder and harder to run. When Donny showed his nose there and passed me, I got the wing back and tried a different line down the back stretch and was able to get underneath him and slide him back and slide a lapped car. That was the winning move there really.” END_OF_DOCUMENT_TOKEN_TO_BE_REPLACED 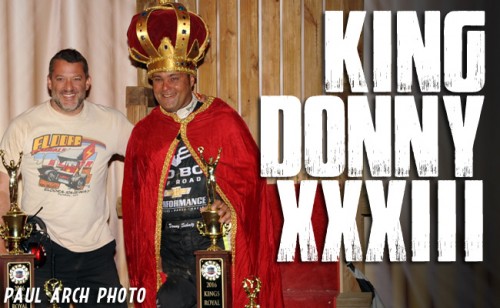 ROSSBURG, Ohio – July 16, 2016 – It has been nearly a decade since he last stood in victory lane at the Kings Royal, but Donny Schatz looked like a natural as he was crowned King Donny XXXIII – his third Kings Royal title since 2007 – on Saturday night at Eldora Speedway.

Schatz who drew number 15 in the qualifying pill draw and was looking to get his 15th World of Outlaws Craftsman® Sprint Car Series victory of the season had the luck on his side, he just needed the hard work to push him through – and that’s exactly what he and his team did.

“This is unbelievable,” Schatz said. “It’s been a challenge here all weekend and it’s one of them places, we felt like we’ve been good at the Royal and we’ve maybe just done the wrong things. But not tonight. We were awesome all night. These guys got the car qualified well, got through the Heat, the car was awesome in the Heat races. It’s such a blast.” END_OF_DOCUMENT_TOKEN_TO_BE_REPLACED

Daryn Pittman Tops in Knight Before the Kings Royal Victory 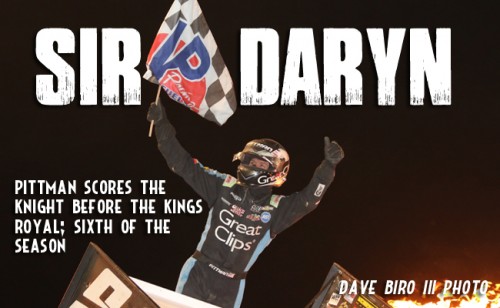 ROSSBURG, Ohio – July 15, 2016 – Daryn Pittman dominated the Knight Before the Kings Royal at Eldora Speedway on Friday night, as he cruised to his sixth World of Outlaws Craftsman® Sprint Car Series victory of the season.

For Pittman, the win was his first at the historic half-mile oval in Rossburg, Ohio since May 4, 2013. Even with the victory, Saturday night’s $50,000-to-win Kings Royal, one of the most coveted wins in all of motorsports, was on Pittman’s mind.

“Hats off to this Great Clips team. We had a really great car,” Pittman said. “It doesn’t matter how good you are tonight. We can’t do exactly what we did, tomorrow night. Tomorrow night is a new race track. Try to go after my second Kings Royal. It was a pretty special win in 2008.” END_OF_DOCUMENT_TOKEN_TO_BE_REPLACED 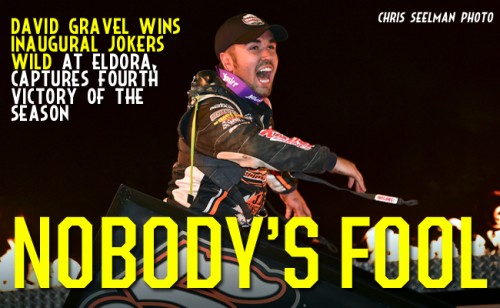 ROSSBURG, Ohio – July 14, 2016 – David Gravel had his hands full through much of Thursday night’s inaugural Jokers Wild at Eldora Speedway, but the 24-year-old driver held tough and scored his fourth World of Outlaws Craftsman Sprint Car Series victory of the season.

The 24-year-old driver kicked off his dominant run by powering past Donny Schatz in the Dash to take the feature pole position.

Through the opening laps of the 30-lap main event, Gravel pulled out to a steady lead over second place Brian Brown. Through early cautions the field tightened back up.

NASCAR Truck Series stand out and two-time World of Outlaws winner Christopher Bell, who started fourth, powered forward, slipped back and then again made the charge to the front. He had taken over the second spot with the leader in his sights when the caution flew and Bell was forced to the pits with a mechanical issue. END_OF_DOCUMENT_TOKEN_TO_BE_REPLACED 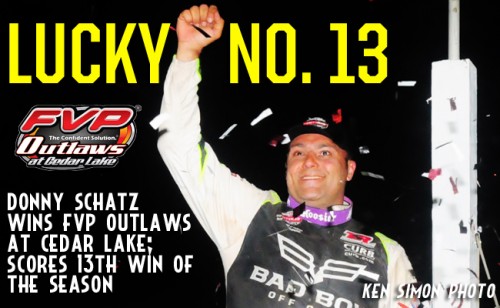 NEW RICHMOND, Wisc. – July 9, 2016 – Donny Schatz and Brad Sweet battled throughout much of Saturday night’s FVP Outlaws at Cedar Lake feature at Cedar Lake Speedway, as they traded the lead back and forth through lapped traffic and cautions, but it was Schatz who held tough to score his 13th World of Outlaws Craftsman® Sprint Car Series victory of the season.

“I’ve got to thank these guys,” Schatz said. “They’re incredible in what they do.”

Schatz, who closed out the previous night at Cedar Lake with a close second place run, jumped out to an early lead in Saturday night’s main event with Sweet hot on his trail. Through the first five laps, Sweet looked for a way around but Schatz held tough.

The first caution of the night came out on lap 13 and on the restart, Schatz and Sweet resumed their battle as David Gravel began challenging Willie Croft for third. Gravel eventually took over the third spot with a pass on the high side off of turn two.

Meanwhile, Sweet was throwing sliders on Schatz through turns one and two. On lap 13, he made it stick but Schatz battled back by. The next lap, Sweet did it again, but this time, held the position. END_OF_DOCUMENT_TOKEN_TO_BE_REPLACED

Joins Bill Balog as the Only Other First Time Winner, So Far, in 2016 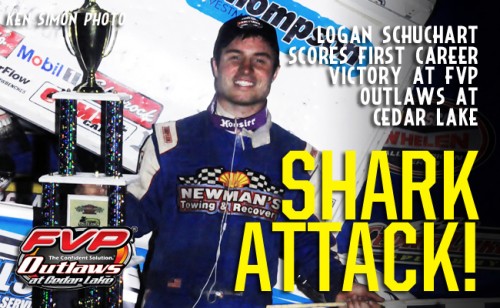 NEW RICHMOND, Wisc. – July 8, 2016 – It was not easy but Logan Schuchart did what he had to Friday night at Cedar Lake Speedway to score his first career World of Outlaws Craftsman Sprint Car Series victory as he battled past Joey Saldana and held off Donny Schatz to win the FVP Outlaws at Cedar Lake.

Schuchart, who started the feature on the front row with Shane Stewart, jumped out to the lead early but succumbed to Joey Saldana’s charge on a lap seven restart. Schuchart battled back as the two drivers worked their way through traffic and despite strong advances from Donny Schatz late, Schuchart held tough.

“I’m proud of our team. We’ve gotten close a couple of times and I can tell the disappointment when we come back,” Schuchart said. “I told everybody, ‘we’re going to get one of these after a while.’ You know how hard it is racing with the Outlaws and how difficult it is every night, but I believed we were going to get it done and sooner or later it was going to start clicking.

“I promised my little brother, two years ago, he said, ‘how come you don’t win anymore?’ I said, ‘well, what do you want me to do? The next time I win, I’m going to stand on the wing.’ He said, ‘alright.’ So tonight, I had to fulfill that promise to my little brother. That felt great.” END_OF_DOCUMENT_TOKEN_TO_BE_REPLACED

Brad Sweet Has a Good Night at Badlands Motor Speedway 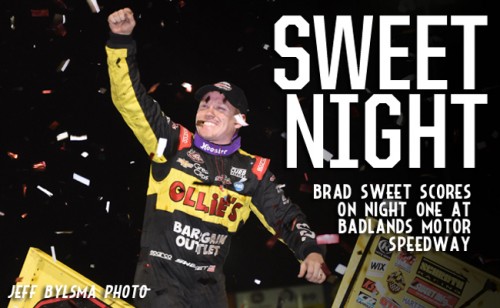 Sweet, who took the checkered flag at the track for the first time in his career, lost the lead to Rico Abreu on lap 10. When Abreu got too low on the track and caught a tire barrier sending him flipping on to the front straight, Sweet regained the lead. Through a couple of close calls, it was smooth sailing to the end.

Sweet’s win is his first since May 13 at Plymouth Speedway.

“It feels good. This team needed that win – we’ve been in a bit of a slump,” Sweet said. “We just haven’t been able to compete for wins over the last 10 or 15 races. We started out the season really strong and then kind of fell off there. So it’s nice to get back to victory lane and give these guys some confidence.” END_OF_DOCUMENT_TOKEN_TO_BE_REPLACED 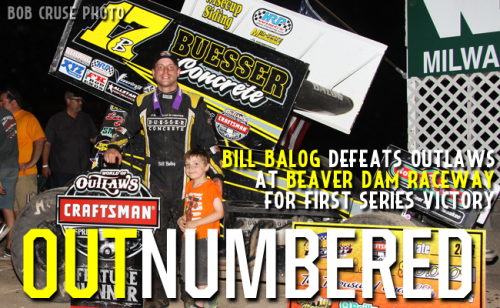 Balog, who is only the fifth non-Outlaw driver to win in 2016, captured the lead from Pittman on lap three after starting the feature in the second position.

“Now I feel like I have a home track advantage,” Balog said as the Wisconsin fans cheered. “We have won a few here, but not really dominating wins. I got a lot of Wisconsin people here behind me, so I got to thank all of you guys.

“Maybe they didn’t think we could do it, but we did it and it’s an awesome, awesome night.”

Pittman, who was victorious in a green-white-checkered finish on Friday night at Jackson Motorplex, tried everything possible to muscle the victory away from Balog, but came up one spot short of claiming back-to-back victories.

“I gave everything I had,” Pittman said. “I had it all planned out perfectly in my head, but it didn’t go that way. Nothing went the way I thought; we had that red flag, and I think my tire went down a little bit…think if my tire was low enough, I probably could’ve stuck it, because after the checkered I hit it really good down there, but too little, too late.

“Congrats to Bill and his team, they did a great job and he ran a great race, so they deserve to win. I just needed to make some better decisions and get to the top of the track quicker and hang on to the lead a little longer.” END_OF_DOCUMENT_TOKEN_TO_BE_REPLACED