PHENIX CITY, AL – Jake Knowles of Tyrone, GA had an exciting start, then an easy race for 40 laps, followed by an anxious last ten laps.  But he hung on to win the 50-lap Chevrolet Performance Super Late Model Series Race on Saturday night at East Alabama Motor Speedway in the Cedartown Electric Rocket, and in doing so, took over the point lead.

Knowles survived a spin at the start of the race, but after the restart, he took command of the race on lap two, pulling out to over a full straightaway lead.  By lap 32, Knowles caught some lapped traffic and on lap 40 his big lead had evaporated, as National Dirt Late Model Hall of Fame Inductee Ronnie Johnson of Chattanooga, TN closed in to challenge Knowles for the point.

Knowles kept the bottom groove covered, leaving Johnson the outside.  With no place else to go, Johnson stepped to the outside, and even pulled alongside Knowles on a couple of occasions, but he slipped high in turn four on lap 49, and Knowles hung on for a .997 second margin of victory.

“My Dad was signaling me that my big lead was going away, and it was pretty frustrating being stuck behind a lapped car that ran me all over the race track,” Knowles said.  “I looked up at the scoreboard with ten laps to go, and saw the number 5 up there in second, and I knew I could be in trouble.” END_OF_DOCUMENT_TOKEN_TO_BE_REPLACED 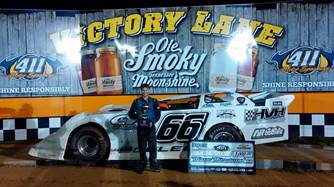 SEYMOUR, TN – Adam Beeler of Knoxville, TN finally got it all together to win his first NeSmith Chevrolet Dirt Late Model Series race in the Ole Smoky Moonshine 50 on Saturday night at 411 Motor Speedway driving the Mighty Muffler and Brakes CVR.  Beeler swept the program as fast qualifier, and then led all 50 laps for the $3,000 victory.

“These NeSmith Chevrolet Dirt Late Model Series races are hard to win,” Beeler said.  “We’ve been fast qualifier a couple of times and led a few races, but we could never put it all together to win one of these races, so it feels really good to finally do it.”

The defending NeSmith Chevrolet Dirt Late Model Series National Champion Ronnie Johnson of Chattanooga, TN got back into the 2014 title hunt with a last lap, last turn pass to finish second in the NeSmith Chevrolet Special.  Jered Hawkins of Fairmont, WV held off Johnson for several laps, but had to settle for third in the Bland’s Towing Rocket. 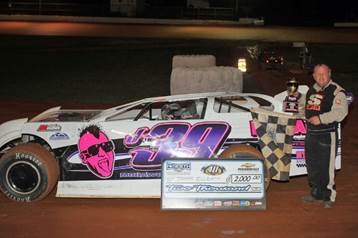 SEYMOUR, TN – The “Mohawk Warrior” Jimmy Elliott of Cleveland, TN only led 200 feet of the Ole Smoky Moonshine 40 for the NeSmith Chevrolet Dirt Late Model Series Touring Division on Friday night at 411 Motor Speedway, but it was the most important distance, as it led to the checkered flag and the $2,000 top prize.

“Ryan was leaving just enough of the bottom groove open for me to get my nose in there going into turn three,” Elliott said.  “I got into him, and I didn’t mean to, but it’s the last lap, and it’s for the win.  That’s racing.”

King hung on to finish second in the Brian King Roofing Stinger, a race car adorned with a graphics package to honor his mentor, the late great Scott Sexton.  Polesitter and new track record holder Cory Hedgecock of Loudon, TN took the third spot in the Eagle Racing Engines Rocket.  Hedgecock out-timed the 31-car field with a lap around the 3/8-mile high-banked clay oval in 13.826 seconds. END_OF_DOCUMENT_TOKEN_TO_BE_REPLACED

CARTERSVILLE, GA – A high percentage of rain has forced officials to postpone the Ole Smoky Moonshine Nationals at 411 Motor Speedway in Seymour, TN for the NeSmith Chevrolet Dirt Late Model Series one week.  The 40-lap $2,000-to-win race will now be run on Friday night, April 4 and the 50-lap $3,000-to-win event will now take place on Saturday night, April 5.

On both April 4 and April 5, the pit gate opens at 12 noon with NeSmith Chevrolet Dirt Late Model Series Pre-Race Registration and Technical Inspection from 3 p.m. to 6 p.m.  The Drivers Meeting is set for 6 p.m. each night, with hot laps beginning immediately after the Drivers Meeting. 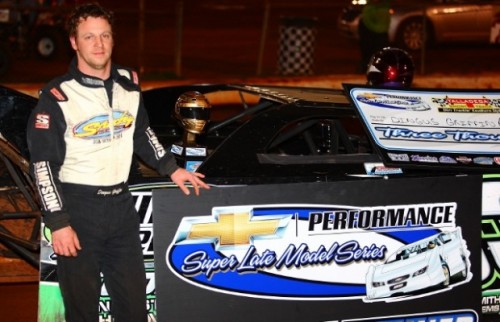 “This is a big win for us, as we have worked some long hours during the last week just to get the car ready,” Griffin said.  “I have to thank Tommy Pope for giving me this opportunity because I haven’t been racing a lot, and I only raced one time last year.  This was a great car to drive tonight.”

National Dirt Late Model Hall of Fame Inductee Ronnie Johnson of Chattanooga, TN started sixth in the NeSmith Chevrolet Special and finished second after an exciting battle with Jake Knowles of Tyrone, GA, who took the third spot in the Cedartown Electric Rocket.  Knowles was the fast qualifier among the 25 entrants with a lap of 13.347 seconds around the ¼-mile clay oval. END_OF_DOCUMENT_TOKEN_TO_BE_REPLACED

These three races were rescheduled from the Bubba’s Army Winternationals Presented By Rock Auto.com five-race series on January 28 through February 1.  With 46 race teams in attendance, all five races were rained out without a wheel being turned.  The series then went to Golden Isles Speedway in Brunswick, GA for a three-race series on February 6, 7, and 8.

The February 6 event was rained out, and run as an afternoon show won by Ray Cook of Brasstown, NC on February 7.  The NeSmith Chevrolet Dirt Late Model Series came back later that evening for another complete show that was won by Jason Fitzgerald of Middleburg, FL.  Walker Arthur of Forest, VA won the February 8 race.

“We want to thank the teams that made the long trip to Bubba Raceway Park in Ocala, FL and then had to sit through five straight days of rain,” NeSmith Chevrolet Dirt Late Model Series Director Adam Stewart said.  “It was an unfortunate and unprecedented situation, and our initial reaction was to reschedule for early March.  But after we spoke with the track officials and competitors, it was decided that the three rescheduled events needed to be cancelled, as several teams had depleted their travel budgets making the long trips to Central Florida and Southeast Georgia.  It was just too much to ask them to make a third trip that far south this early in the season.” END_OF_DOCUMENT_TOKEN_TO_BE_REPLACED 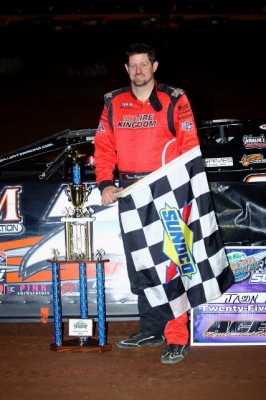 BRUNSWICK, GA – Jason Fitzgerald of Middleburg, FL drove the M&M Transport and Refrigeration GRT to a convincing victory Friday night at the Super Bowl of Racing Presented By Rock Auto.com for the NeSmith Chevrolet Dirt Late Model Series at Golden Isles Speedway.  Fitzgerald took the lead on the second lap and never looked back for his first series career win.

Jeremy Faircloth of Swainsboro, GA finished second in the CJR Forestry Warrior and Ray Cook of Brasstown, NC was third in the Tri-County Race Track Special.  Walker Arthur of Forest, VA took the fourth spot in the Cecil B. Arthur Beef Farms Special and Chris Noah of Rainbow City, AL was the Rookie of the Race after a fifth-place effort in the Old Man’s Garage Special.

Fast Qualifier Jacob Anderson of Murphy, NC finished ninth in the Scrapy’s Metal Special.  Anderson out-qualified the 43-car field with a lap around the 4/10-mile clay oval in 16.319 seconds.  Mark Whitener of Middleburg, FL rounded out the top ten in the Dave’s Towing Special.

The preliminary ten-lap B-Main Races were won by Noah, Arthur, Jak Kicklighter of Savannah, GA in the Kicklighter Construction Special and Montana Dudley of Phenix City, AL in the Eiland Pools Rocket.  Dudley was unable to start the main event after breaking an axle in his B-Main winning effort.

Anderson and Fitzgerald battled side-by-side for the lead for the first two laps of the 30-lap main event before Fitzgerald took the lead.  Donald Brasher of Burlington, NC trailed the lead duo in the Mega Plumbing Rocket followed by Faircloth and Cook.  The first of six caution flags came out on lap four when Dalton Cook stalled the Wrap Tech Signz Special in turn four. END_OF_DOCUMENT_TOKEN_TO_BE_REPLACED 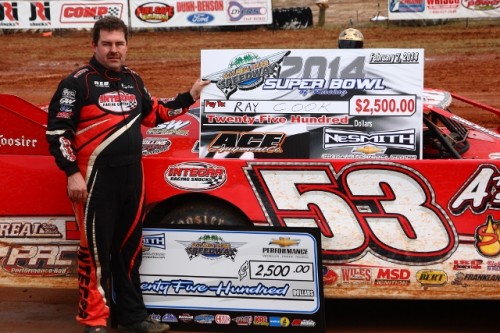 Cook started ninth and moved up to the second spot by lap eight.  When early race leader Walker Arthur of Forest, VA began to encounter lapped traffic with ten laps to go, Cook closed in and made up a half straightaway deficit.  Arthur pushed up the banking in turn one on lap 26, and Cook dove underneath to take the lead.

“I couldn’t catch Arthur until he got into that lapped traffic because until then, it seemed like we were running the same speed,” Cook said.  “He tried to lap a car on the outside and the lapped car moved up in front of him.  That opened the door for me to take the lead.” END_OF_DOCUMENT_TOKEN_TO_BE_REPLACED

CARTERSVILLE, GA – The NeSmith Chevrolet Dirt Late Model Series will try once again to open their 2014 season this Thursday, Friday and Saturday with a trio of $2,500-to-win races during the Super Bowl of Racing Presented By Rock Auto.com at Golden Isle Speedway in Brunswick, GA.

Although they get did not get to turn a competitive wheel during the week, they’re equipment is fresh and ready to go for the Golden Isle Speedway races.  The Thursday and Friday events will each be 30 laps in length, and the Saturday night race will be a 50-lap race.

The 2013 NeSmith Chevrolet Dirt Late Model Series Champion Ronnie Johnson of Chattanooga, TN will be back to defend his title.  The National Dirt Late Model Hall of Fame Inductee had three wins last season, and will be looking for his 18th series career win at Golden Isles Speedway. END_OF_DOCUMENT_TOKEN_TO_BE_REPLACED

OCALA, FL – Rain and wet track conditions all week has forced postponement of the NeSmith Chevrolet Dirt Late Model Series Bubba’s Army Winternationals Presented By Rock Auto.com until March 6, 7, and 8. In an unprecedented situation, four straight days of rain left the track conditions too wet for safe competition and all five nights of competition were rained out.

The 2014 NeSmith Chevrolet Dirt Late Model Series Touring Division season opener will now be at Golden Isles Speedway in Brunswick, GA for the Super Bowl of Racing Presented By Rock Auto.com on February 6, 7, and 8. All three races will pay $2,500-to-win. The February 6 and 7 shows will be 30 laps, and the February 8 event will be 50-laps.