(Center Lisle, NY) NASCAR star David Reutimann, driver of the Tommy Baldwin Racing #10 and his legendary father Buzzie from Zephyrhills, Fl. will be in attendance this Friday night August 3rd.  They will both be meeting and greeting fans, signing autographs and chatting with everyone during the course of the race night.  Best of all, they will strap their helmets on and battle with the Sportsman Modified drivers during Friday nights’ racing activities, hoping to show their dirt driving skills to all the folks in attendance.

David, a two time winner in NASCAR’S top division sharpened his racing skills on the dirt tracks in florida early in his career before he moved into the asphalt ranks on up to NASCAR where he has enjoyed some success with racings’ best.  END_OF_DOCUMENT_TOKEN_TO_BE_REPLACED 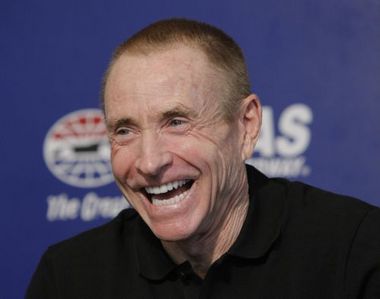 CORNELIUS, N.C. — This week’s tests at New Smyrna (Fla.) Speedway and Daytona International Speedway mark the first two tests for Mark Martin and his No. 55 Aaron’s Dream Machine race team. Martin begins his 30th NASCAR Sprint Cup season driving the No. 55 Aaron’s Dream Machine in 25 races for Michael Waltrip Racing. Martin believes the work done this week is an important step toward running well at Daytona and the rest of the 2012 season.

MARTIN ON THIS WEEK’S TESTS: “These tests aren’t incredibly important from the car hardware side. It’s more important for us as a new group working together to work through the areas like communication, flow, learning everyone’s names, routines and things like that. That’s really the critical part of the test. END_OF_DOCUMENT_TOKEN_TO_BE_REPLACED 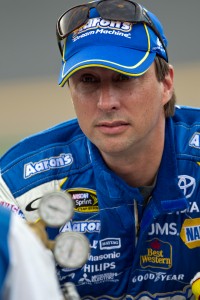 David Reutimann, the 2004 Truck Series rookie of the year, plans to return to the series in 2012, agreeing this week to run up to 15 races in the No. 92 Chevrolet for Ricky Benton Racing, mainly companion events associated with his part-time Cup schedule with Tommy Baldwin Racing.

Along with the Truck schedule, David Reutimann will run part-time for Tommy Baldwin Racing in the Cup Series.

“We heard about [Reutimann’s] situation after being released from Michael Waltrip Racing,” Benton said. “Our crew chief, Jason Overstreet, had worked with David several times back early on. So they’ve got a relationship there, so we just kind of thought it might be a good possibility to put that deal together. END_OF_DOCUMENT_TOKEN_TO_BE_REPLACED

ML Racing announced today that Johanna Long will drive the No. 70 Biomet – Foretravel Motorcoach Chevrolet Impala for the 2012 and 2013 NASCAR Nationwide Series.

Long, a Pensacola, Fl native is the winner of the 2010 Snowball Derby. She began her NASCAR career in 2011, driving a limited schedule in the Camping World Truck Series for Panhandle Motorsports.  Long qualified in the 5th place position in her first start at Daytona. Her career best finish to date was 11th place at Texas Motor Speedway.

Long will join a team that is owned by Mary Louise Miller, one of the few female owners in NASCAR. Miller is known as a big supporter of women in racing. At nineteen, Long becomes the youngest female driver to compete in the Nationwide Series, and she will be competing for Rookie of the Year in 2012. END_OF_DOCUMENT_TOKEN_TO_BE_REPLACED
Tweet
By Scott|2012-01-05T17:56:06+00:00January 5th, 2012|Featured, Front Page News, NASCAR, Series|Comments Off on Johanna Long Moves to ML Motorsports to Pilot the No 70 Chevrolet in 2012 and 2013
Read More 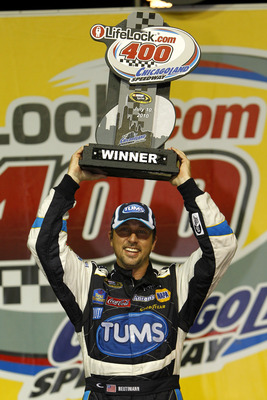 Reutimann, a Zephyrhills, Fla., native, made his first NSCS start in 2005. He competed in four full NSCS seasons with Michael Waltrip Racing and compiled two wins, 12 top-fives, 26 top-10s and four poles. The 41-year-old racer also competed in the NASCAR Nationwide and Camping World Truck Series where he captured two wins.

“Tommy has built a really good organization from the ground up in a really short amount of time,” said Reutimann. “One of the things I like about Tommy and what’s refreshing about him is that he is just a racer. There are lots of things he could be doing but instead he is at the shop every day working hard to build the organization from the ground up. There are not a lot of true racers in the garage, and he is one of them. It’s the way I was raised with my Dad, so we are on the same page. I’m just really looking forward to the season and see what we can do.” END_OF_DOCUMENT_TOKEN_TO_BE_REPLACED

Nationwide Series standout will pilot the famed No. 43 Ford Fusion in 2012

CONCORD, N.C. (Jan. 4, 2012) – Richard Petty Motorsports announced today that Aric Almirola will drive the legendary No. 43 Ford Fusion in NASCAR Sprint Cup Series competition beginning in 2012.
Almirola has made 35 starts in the Sprint Cup Series, his most recent stint coming in 2010 when he finished the last five races of the season in the No. 9 Ford. During the final race of the season at Homestead-Miami Speedway, the Tampa, Fla., native posted a career-high, fourth-place effort. Almirola drove a JR Motorsports entry in the NASCAR Nationwide Series in 2011 and capped off a successful season with a fourth-place finish in the championship point standings.
“One of the things I am most excited about is to have the chance to drive a car as iconic as the No. 43,” stated Almirola. “There is so much history surrounding that number and to have my name above the door will be really special for me. END_OF_DOCUMENT_TOKEN_TO_BE_REPLACED
Tweet
By Scott|2012-01-05T00:38:10+00:00January 5th, 2012|Featured, Front Page News, NASCAR, Series|Comments Off on Nationwide Series standout will pilot the famed No. 43 Ford Fusion in 2012
Read More
Previous12