In the Q Auto and Injury Attorneys Desoto Pro Truck main event, Hogan started on the pole and grabbed the lead at the start of the opening 50-lap segment from Jeff Guilbault and Steve Darvalics. He held a slim lead when the caution flew for Cameron Cruse’s spin in turn one just after the field completed 11 laps.

Hogan withstood a series of challenges on a rash of restarts over the next 14 laps. Darvalics made a move for the lead and had just cleared Hogan before the caution flew at the halfway point – meaning that Hogan would keep the lead for the next restart – a restart that saw four trucks eliminated in a crash as the field came to the green flag. END_OF_DOCUMENT_TOKEN_TO_BE_REPLACED 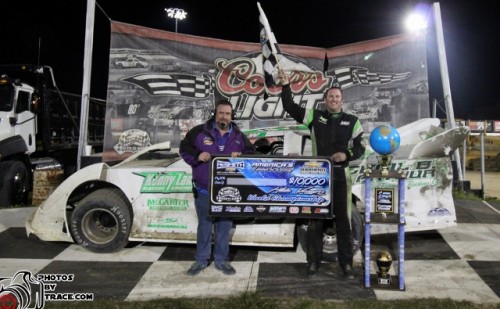 CARTERSVILLE, GA – The NeSmith Chevrolet Dirt Late Model Series will open the Bubba’s Army Winternationals at Bubba Raceway Park in Ocala, FL with a busy schedule of running four races over three days of racing. Rounds 2, 3 and 4 of the Rock Auto.com Winter Shootout will happen on Thursday, Friday and Saturday.

Saturday will feature a double-header, as the $10,000-to-win 100-lap 11th Annual Chevrolet Performance World Championship Race will also take place. The Qualifying and Heat Races took place on November 20, 2015 to fill the front half of the main event that was rained out on November 21, 2015 and rescheduled for Saturday night. 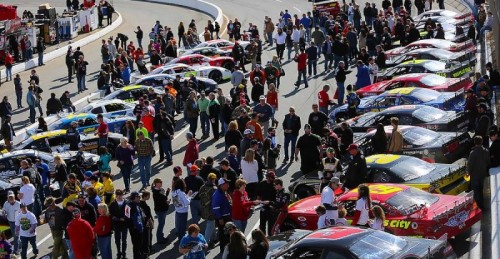 Salem, IN (January 15, 2016) – Champion Racing Association Powered by JEGS officials have added several names to the entry list for SpeedFest 2016, which will be held on Saturday, January 30th and Sunday, January 31st at Crisp Motorsports Park – Home of the Watermelon Capital Speedway located in Cordele, Georgia. As announced earlier this week, 2015 NASCAR Sprint Cup Series Champion Kyle Busch has added his name to the entry list for the 200 lap ARCA/CRA Super Series Super Late Model event, but that’s just the beginning of the talent that is entered for both events with SpeedFest 2016. 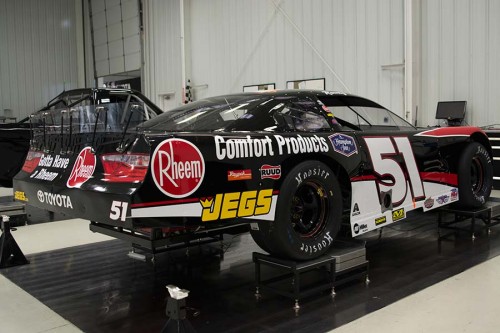 Salem, IN (January 13, 2016) – Crisp Motorsports Park – Home of the Watermelon Capital Speedway officials have announced that 2015 NASCAR Sprint Cup Champion Kyle Busch will be racing in the 200 lap ARCA/CRA Super Series Super Late Model event with SpeedFest 2016, which will be held on Saturday, January 30th and Sunday, January 31st.

“We are very, very fortunate to be able to announce that Kyle Busch will be racing in SpeedFest 2016,” remarked Crisp Motorsports Park General Manager Scott Sumner. “He found out we were doing this event again, and he always looks forward to coming back to South Georgia. Kyle says all the people are very, very hospitable in South Georgia and he’s looking forward to coming back here. We drew a huge crowd when he was here last, I hope our fans are excited and want to come out and see him race again.”

“I’ve always enjoyed racing at SpeedFest and I’m looking forward to the opportunity to go back this year thanks to the support from Rheem Heating and Cooling and JEGS.com,” Busch said. “Everything went well with my latest surgery and I feel really good. Without an opportunity to get in a Sprint Cup Series car before we get to Daytona, running this race will be a good tune-up prior to Speedweeks.” END_OF_DOCUMENT_TOKEN_TO_BE_REPLACED

CARTERSVILLE, GA – The eight-race NeSmith Chevrolet Dirt Late Model Series Winter Shootout Series begins this week with the 25th Annual Icebowl at Talladega Short Track in Eastaboga, AL.  The Winter Shootout Series has picked up a sponsor in RockAuto.com, and will now feature a $5,000 point fund for drivers with perfect attendance.

Qualifying and Heat Races to fill the front starting spots for the $3,000-to-win 50-lap RockAuto.com Winter Shootout opener for the NeSmith Chevrolet Dirt Late Model Series will be on Saturday.  The gates open at 8 a.m., with Pre-Race Registration from 8 a.m. to 9:30 a.m.  The Drivers Meeting is scheduled for 9:30 a.m. and Hot Laps will begin at 10 a.m. END_OF_DOCUMENT_TOKEN_TO_BE_REPLACED

WEEDSPORT, N.Y. – Dec. 29, 2015 – After a full year of testing, the Wegner Motorsports W-16 Engine is approved and ready for implementation in the DIRTcar 358-Modified Series. For less than $10,000, the engine will be legal at all DIRTcar sanctioned facilities as well as in the 358-Modified Series in 2016.

The new combination will allow drivers to enter the division while giving those already in competition an economical option.

“What we wanted was an alternative for the Sportsman guys moving up as well as for drivers who are already in the division and looking for an economical option,” said Mike Perrotte, DIRTcar director, series and sanctioning. “This isn’t for everyone, but it is affordable and will keep more people racing. We’ve seen what the GM Performance option has done to grow the Sportsman ranks and we hope to help some of them move up to the 358-Modified division.” END_OF_DOCUMENT_TOKEN_TO_BE_REPLACED

needed just a handful of laps to build a big lead. Steve Darvalics got to

for an accident involving Joey Sims and Rick Reed on lap 10. END_OF_DOCUMENT_TOKEN_TO_BE_REPLACED