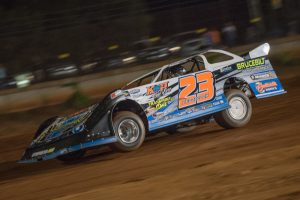 Sweetwater, TN – Round 6 of the NeSmith Chevrolet Dirt Late Model Series Touring Season took the series to Tim and Angie Kyle’s I-75 Raceway in Sweetwater, TN for the 3rd Annual Bill Hendren Memorial 40. The race honoring the Hendren patriarch would see twenty-one competitors sign in for action at the 3/8 mile semi-banked oval. Cory Hedgecock made the trip all the way from his race shop, about 7 miles, to see if he could remain “perfect” at I-75 Raceway during NeSmith Dirt Late Model Series competition.

Hedgecock got off to a great start by turning fast time of the night in his Eagle Race Engines sponsored BruceBilt Rocket with a time of 13.204. To keep things interesting for those drivers in pursuit of the 2016 NeSmith Cup and National Championship, current point leader Scott Dedwylder timed in second fast, followed by current 3rd place in points LaFayette, AL driver Chase Edge making the top 3 starters the top 3 currently in the National Championship point standings.

Rounding out the top six qualifiers that would be locked into the feature based on time were Marcus Minga in his B&M Salvage Rocket, Riley Hickman in the Hickman Manufacturing Special, and John Ownbey rounded out the top 6 in his Sam’s Restaurant Equipment special.

Hedgecock led the field to green with Dedwylder and Edge in pursuit before the first of five caution flags waved on lap 2 for Jason Britton in turn 2. On the ensuing restart the R1 of Riley Hickman would make contact and spin off of the back straightaway to bring out the caution again. The field was only able to complete one lap before the yellow lights were lit once again for a spin by Jimmy Elliott in turns 3 and 4. The restart on lap 3 would see the biggest incident of the night as a log jam of cars coming off of turn 2 caused the #7 of Marty Calloway to get out of shape, and several cars made heavy contact after the race track closed up quickly with the spinning cars heading into turn 3. The A-1 car of Jesse Lowe, the J39 of Jimmy Elliott, 7 of Calloway, 7 of William Overby, and the 24c of Barry Goodman were all victims of the melee with only Goodman able to rejoin the field. The caution would wave once more for a slowing Michael Blount in the Magnolia Transport special.

Hedgecock was able to keep his nose clean and make quick work of lapped traffic as he paced the field after each restart and was able to finish 3.062 seconds ahead of Dedwylder and Edge at the checkered flag. This win marked Hedgecock’s third win in of the season, all three of which have come at the track just a short drive from his shop.

Official Results for Round 6 at I-75 Raceway in Sweetwater, TN