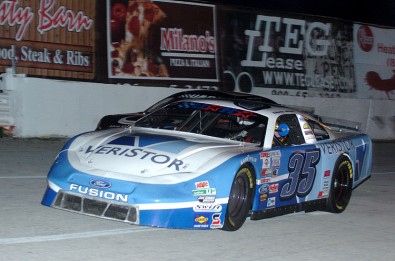 Hendersonville, NC (12/3/12) – Devin Jones joined the United Auto Racing Association (UARA) during the 2012 racing season, making it his first experience to the touring late model industry. This young teenager moved from San Luis Obispo, California to Mooresville, NC to feed his hunger for racing and to challenge himself with new opportunities.

“I come from super late models, which are light weight and a little faster,” says Jones. “These late models are a lot different, much heavier and they react different. I’ve learned a lot this season.”

Jones had no problem making a smooth transition to the late model world. Within the first five races of the season, Jones had three top-ten finishes. His best finish of the season came from one of those races at Anderson Motor Speedway in which he led some laps and came home with a good solid second place finish. Not only did he win Racing Electronics second place award, he also earned the Circle Wheel and Xtreme Trophy’s Rookie of the Race Award. It was a great day for Jones who excited his sponsor Veristor’s 65 employees that were there to cheer him on. Veristor had brought their group up from Atlanta to show their support to Jones and the UARA series.

“Our expectations of the year were to run up front and be competitive,” the Veristor driver said. “The ultimate goal is to win a pole, win a race, and finish in the top five for the season.”

Jones finished right outside the top five in the his championship points and he almost got that win at Anderson, but he did bring home a Sunoco pole for his Chase Pistone team. Out of 11 Rookies, only four brought home a Sunoco Pole. Jones brought his home at Caraway along with a Circle Wheel Award and Pigwire’s Electrifying Move of the Race Award at Caraway.

Although Jones and his team struggled with motor problems and getting caught up in race traffic during a few events, his performance on the track made up for the downs. He raced his way to 12 top-15 positions. Additional awards received by Jones included, Tilton (3), Ultra Cool Brake Fans, WP Racing Shocks and Joe Gibbs Driven(2). Jones also received the ARBodies Hard Luck Award at the Banjo Matthews Memorial 150 at Hickory Motor Speedway.

As of now, Jones plans on running the full UARA-STARS schedule for 2013. Jones should only move forward with the strong support of his father Tim, mom Erin and younger brother Seth who attend every event to encourage him on his way.

To keep up with Jones and the other STARS during the off season by following them on Twitter, @uarastars, and “like” them on Facebook under the United Auto Racing Association.