UARA-STARS Head Back for Round 2 at Kingsport Speedway 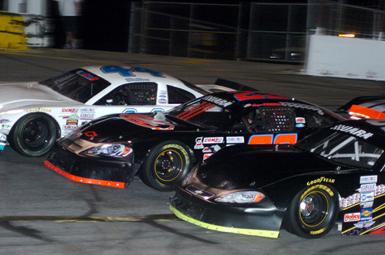 Travis Swaim and Dillon Bassett are neck-in-neck in the current points standings with Sean Rayhall, Scott Turlington and Jake Morris, Devin Jones, Roger Powell, Brandon Jones, Tyler Laing, and Ben Rhodes following to compose the top ten.   Swaim is looking to gain his first UARA victory at Kingsport.  Swaim has four Sunoco Pole awards to his credit and a consistent run in the top five for all but two events this season.

That elusive first win is something he is determined to attain, the sooner the better for Swaim.

Young Dillon Bassett is leading the Rookie standings but not without pressure from ten other rookie competitors.

These regular STARS will have to hold off local competitors Lee Tissott, Daniel Pope, Ryan Stiltner and Hal Martin. Both Tissott and Pope have toured with the series, but now entertain the fans weekly at Kingsport Speedway.

In 2003 Tissott was crowned the UARA Champion and knows what it takes to land a win.  Tissot also has frequented the victory lane of Kingsport many times including the UARA event held there in August 2011.

Young Ryan Stiltner is in great form after winning his first ever late model event recently at Lonesome Pine Raceway.  Stiltner would like nothing better than to follow that up with a UARA victory.

During the last visit to Kingsport, Rookie Ben Rhodes received his first Sunoco Pole and Coleman Pressley was determined the official winner after post race tech.  Fans can look forward to a night full of action as the regulars STARS, rookies and locals battle it out on the 3/8 concrete oval.

Along with the STARS and these local late model hot rods, the Street Stocks, Pure 4s and the Pure 4 Rookies will run on Friday night. The Pure 4 will kick off the night at 8 o’clock with their 20-lap event. The UARA-STARS, Street Stock and then the Pure 4 Rookies will round out the night. According to the tentative schedule, grandstands open at 5 with the STARS qualifying at 5:45p.m.

In earlier reports Steve Wallace was on the list of entries but due to another engagement with he will not be in attendance for the UARA event at Kingsport.  We wish Steve much success at his race in Iowa this coming weekend.