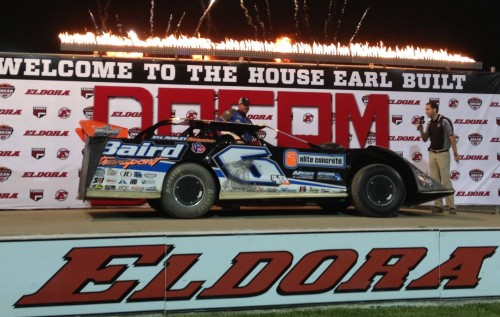 ROSSBURG, Ohio June 9, 2016 – It was a night of extremes Thursday as the first day of The 22nd Annual Dirt Late Model Dream by Ferris Mowers at Eldora Speedway delivered a doubleheader delight for Brandon Sheppard and Jonathan Davenport. While Sheppard dominated the first feature of the night, Davenport made a late push to win his A-Main.

In a 72-car entry list, Sheppard said he under-performed in both his feature race and in qualifying; however, Sheppard started the 24-car A-Main on the outside first row. The New Berlin, Ill. native ended up capturing the lead in turn four on the very first lap in turn three. He was uncontested by Terry Phillips, who lead the field into the green flag. This is Sheppard’s third win of the season. 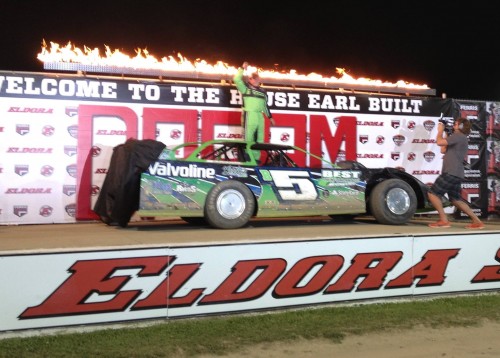 “Early in the night we struggle really badly”, Sheppard said. “But we had a really great car in the feature. We did a little homework last year at the World 100 and got better with our older cars. We kind of did some stuff [tonight] that we were doing to them. We’re just really fortunate to come out with the win.”

On lap two, Billy Moyer moved his way up one spot to second place. His early push like Sheppard’s was not enough to challenge for the lead spot. Moyer only closed the gap to a 0.848-second margin. But, Moyer did separate himself from the rest of the field by a similar margin. With five laps remaining, Moyer’s strong run faded, leaving the door open for Ricky Thornton Jr. who eventually finished in the runner-up position; Moyer managed to hold on to the final podium spot.

Steve Casebolt, who won The Dream in 2007, led much of the race with challenges from Josh Richards, Chris Brown and Jimmy Owens throughout the race. However, it was the final 15 laps that decided the race.

Jonathan Davenport from Williamston, S.C. darted to the front, swerving top to bottom to find an opening. It took Davenport running three-wide alongside Casebolt and Richards on lap 11 to maneuver the car for a pass at the bottom of the track. Davenport started sixth.

“Everyone ran a heck of a race,” Davenport said. “Casebolt was running up front for a while, and Josh and I were racing really tight. That was definitely awesome.”

Casebolt eventually blew a rear-right tire, rearranging the podium spots. Davenport maintained a nearly a three-second lead for the final laps, reopening the lead after the race’s final caution on lap 20. But, the buffer did not come without one last push from Richards, who placed second. Jimmy Owens rounded-out the podium in thrilling fashion, using the restart on lap five to catapult him to a third-place finish.

The 22nd Annual Dirt Late Model Dream by Ferris Mowers returns to action Friday with another doubleheader. Gates open at 12 p.m. with hot laps scheduled to start at 6 p.m.