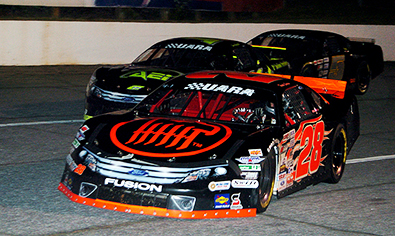 Hudson, NC (10/13/12) –After the misfortune of experiencing engine trouble at Anderson, current point leader Travis Swaim bounced back and won his second race of the 2012 season during the AlphaEnergy Solutions 150 at Tri-County Motor Speedway Saturday night.

After qualifying on the outside pole, Swaim held a fifth place position or higher throughout the race. He seemed to fall back after leading the majority of the first 50 laps, but came back to make a run for the win.

While Swaim played strategy, Jeremy Burns had a similar night. Burns won his first UARA Sunoco Pole with a 16.313 lap during his qualifying run. After the start of the race, he too began to fall back. The two top drivers weren’t having problems, but started conserving their equipment. Local driver Grant Wimbish and Australian Brodie Kostecki took full advantage and created an entertaining race for the lead. The two drivers kept swopping places throughout the middle of the race. Grant Wimbish came home with a top-five finish, but unfortunately Kostecki ran into some bad luck. After being at the front for the majority of the race, Kostecki started to fall back and got caught up in a last lap caution.

Scott Turlington had a good point night as well with his third place finish. Due to technical issues, Scott Turlington’s team worked on the car before the race, which gave up their tenth place qualifying position. Turlington practiced patience as he cruised his way through the field from the back. On the final restart, Turlington realized his time was running out and charged his way to the front. Dillon Bassett had a similar run to Turlington, but got his fender ripped off during the first few laps of the event. Bassett played strategy and worked his way from the back. He brought home the Circle Wheel / Extreme Trophies and More Rookie of the Race Award for the third week in a row and his second consecutive Holley Performer of the Race Award. With Bassett acheiving the award for most positiions gained two weeks in a row it appears he may be playing the strategy game of attaining extra points for doing such. The driver that gains the most positions during an event gains an extra 5 bonus points. They are also awarded up to 10 points for each position gained.

ARBodies Hard Luck Award went out to Sean Rayhall. Rayhall was strong all night, but as he was leading the last fifteen laps, he suffered a flat tire on the front stretch. Jake Morris was another driver who had a rough night. After gaining positions from his 14th starting position, his car slowed down in the high groove and brought it in. His night got cut short due to engine problems.

Pigwire’s Electrifying Move goes out to Tim George Jr. During a three-wide battle for position, George pulled away to prevent what could have been a big mess. Turlington was on the inside and Rookie Brandon Jones was to the outside. The crowd held their breath as the three came out of turn four and exchanged paint all the way down the front stretch. George and Jones would also come home with a top ten finishes.

Towards the end of the season, some of the UARA regulars started to come out of their shells. Sammy Jasper and Josh Wright battled for sixth position. The two drivers drove aggressively, but maintained control to create an exciting show for the crowd.

To wrap up the 2012 racing season, the UARA-STARS will crown a Champion at Rockingham Speedway November 3rd. To keep up with the STARS until then, Fans can follow them on Twitter, @uarastars, and “like” them on Facebook under the United Auto Racing Association.

The UARA takes this time to wish our Ms Kathy Hunter a happy retirement from the UARA. Ms Kathy has decided it is time to slow it down a bit. Her main job is as a teacher assistant in the Henderson County School System for 28 years. Three years ago Ms. Kathy joined the UARA family as our pit booth sign in lady and co scorer. She has been in that position for three years now. Then she started another part time job last year with Oil and Vinegar in Asheville NC. Over the past year she has worked diligently at all three positions and it came to the point she had no time for just herself. She will be with us in heart and will come visit us as a team supporter in future events. We love you Ms Kathy. Happy retirement 🙂