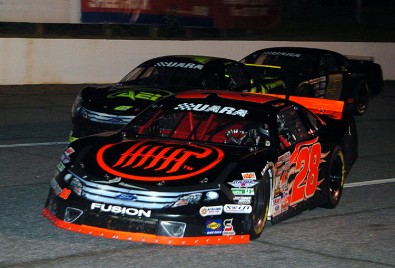 “Looking back on how many laps we lead, I have some regrets that we didn’t seal the deal,” says Swaim. “But winning two out of the last four races kinda eases that pain.”

Swaim won his first career UARA event at Lonesome Pine and his second at Tri-County. He also won Five Star Bodies 1st place award and Ford 1st place award at those events. Neither one of his wins came from leading the most laps, but strategized to lead the most important one. He was Ultra Cool Brake Fans and Racing Electronics runner-up twice and Swift’s third place finisher three times. Swaim was also awarded by Circle Wheel and Tilton awards for his 4th place finish at Tri-County’s first visit and 5th place finish at Kingsport.

During the last race at the Rock, Swaim began to overheat and lost his power steering only a few laps into the race. He and his team were awarded ARBodies Hard Luck because his team never gave up. They worked on that car and did the best they could to get Swaim back on the track.

As of now, Swaim plans to run another full season with the UARA-STARS in hopes for a back-to-back championship. The second Falcon Racing car that was showcased at Rockingham may potentially turn into a teammate for Swaim. Fans can keep up with Travis Swaim by following him, along with the other UARA-STARS on Twitter, @uarastars, and “like” them on Facebook under the United Auto Racing Association.