The Veteran Vs. The Young Gun: Moyer Beats Pierce at Cedar Lake 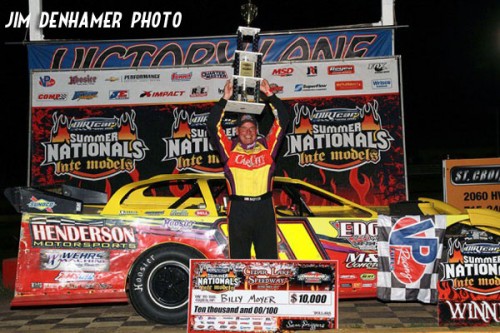 NEW RICHMOND, Wis. – June 18, 2016 – It was a battle between the veteran Billy Moyer and young gun Bobby Pierce Saturday night at Cedar Lake Speedway, as Moyer swept the weekend’s Summer Nationals events at the track in New Richmond, Wis.

Moyer took the quick time earlier in the night and started on the feature pole with Pierce, who claimed the season’s first win at Kankakee County Speedway, on his outside. Pierce jumped out to an early lead and paced the field.

Jason Feger was charging though and caught the 19-year-old Pierce on lap 23. He edged Pierce on the next lap, but Pierce held on. It was Moyer’s turn next though and this time, Pierce was not able to hold on to the lead. The caution flew the next lap and Pierce tried to make a move on Moyer on the restart, but Moyer held tough through the remaining laps and claimed his 92nd career Summer Nationals victory and a $10,000 payday.

“We’ve been coming here for a long time and had a good handle on the place for a while but it kind of got away from us,” Moyer said. “We’ve been here and run but we just didn’t get the ‘w,’ so this this weekend, to win two of them in a row, is pretty neat.”

The Summer Nationals returns to action Sunday at Wilmot Raceway in Wilmot, Wis.