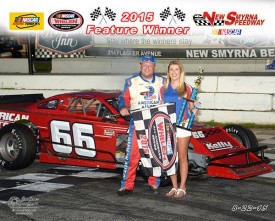 It was one of those crazy nights at New Smyrna Speedway for week number 24 of
the NASCAR Whelen All-American Racing Series Saturday night as one driver got
a big monkey off his back and, even though their race was completed by 9:15
pm, several others spent until the wee hours of the morning in the tech shed
only to have to wait until later in the week to get a final ruling and for the
official results to be posted.
The Modifieds opened up the evening with a 50-lap contest.  Jerry “The Hammer”
Symons of New Smyrna Beach, who had been mired in a big spate of bad luck
recently, set quick time over Alan Bruns, Wayne Parker and James “Tank”
Tucker.  Symons then drew a four for the field inversion placing Tucker on the
pole and it would be Tucker leading the first four circuits before Symons blew
past and into a solid lead.
Fifth-fast qualifier Shain Held is another guy who just can’t seem to get a
break and he pitted his car out of fifth spot on lap 11, then eventually
called it quits five laps later.  Robert Deal stalled his mount at the
entrance to pit road on lap 18 to bring out the only yellow flag of the race.
On the restart, Parker got by Bruns for third place and the lead quartet ran
in order the remainder of the event As Symons scored just his second win of
the year as he last visited Hampton Inn victory lane with his Gene Kelly
Roofing/American Auto, Tires & Service Special on April 4th.
Tucker trailed in second followed by Parker, Bruns and Matt Wheeler.  Greg
Krom made his first start here in a Modified and took sixth followed by Junior
Beckner, Bob Glover, Mike Dahm, Deal, Held and George Dahm.
A great field of 20 Super Stocks signed in to do battle in their scheduled
50-lap special.  Qualifying was tight with Butch Herdegen setting the quick
lap in his Manheim Orlando machine ahead of Preston Hunt, Shannon Kelly and
point leader Justin Reynolds.  Heredegen also pulled a four for the inversion
placing Reynolds on the pole and most figured the Merritt Island hot-shoe
would have things his own way in this one.
However, Kelly had other ideas as he got the jump on the start and assumed the
top spot.  Little did everyone know he was having a really big problem despite
having a very fast car.  “Every time I’d hit the brakes, the car wanted to go
hard right,” said Kelly.  “So I just settled in and did what I could without
using any brakes,” he said.  Unfortunately he got a bit loose in turn two
during lap eight and was inadvertently tapped into a spin by Reynolds.
Reynolds was not penalized and assumed the point for the restart.
Reynolds continued to lead Hunt and Herdegen as things began to settle down a
bit.  That changed on lap 19 as Kelly spun again after getting into the car of
Bobby Holley.  Reynolds, Hunt and Herdegen continued to run 1-2-3 after the
restart until the race was slowed a final time on lap 36 as Joe Gerard’s car
stalled at the entrance to pit road.
After this restart, Hunt began to mount a big challenge on Reynolds that would
continue until the checkered flag.  The 15-year-old Deland High School student
began to work the low side of the track, pulling ahead of Reynolds in the
turns on several occasions and actually leading lap 40.  Reynolds continued to
work the preferred middle groove though and held off Hunt at the finish with
Herdegen not far behind in third while ninth starter George Spears worked his
way up to fourth as the checker flew ahead of Zachary Curtis.
Victory lane ceremonies were concluded by 9:15 and it was off to the tech
inspection area where the top two cars protested each other’s legality.  The
winning car of Reynolds was literally “torn down to the bare frame” while the
transmission was the reason for the protest of the Hunt car.  Along with those
two, the speedway tech officials also wanted to check several items on the
third place car of Herdegen and the fifth place car of Curtis, both of which
passed with flying colors.
As the clock raced past midnight into Sunday, things had yet to be resolved
concerning the issues related to the top two cars and things began to get a
bit “testy” in the tech area as a large crowd was watching the proceedings.
Eventually the transmission in Hunt’s car was determined to not be in line
with the rules while the inspectors deemed they needed more time to make a
determination on the winning car of Reynolds.  As of the time this release is
being written (Tuesday afternoon) no final results have been posted.  “I
didn’t get home until 4 am Sunday and here it is two days later and I still
don’t know if I finished first or second,” said Herdegen who, so far, is the
only driver to beat Reynolds this season (on the track).  A press release with
the official results will be posted as soon as they are made official.
Greg Bruce, Jr. and his Saturn again “ran rings” around the field in the
20-lap Bomber feature for his fourth win of the year.  Aaron Overman took the
checker in second ahead of Charlie King, Jr. and point leader James Skinner
who blew a tire and pounded the turn two wall on lap eight.  Overman has now
cut Skinner’s point lead to just five heading into the final two months of the
season.