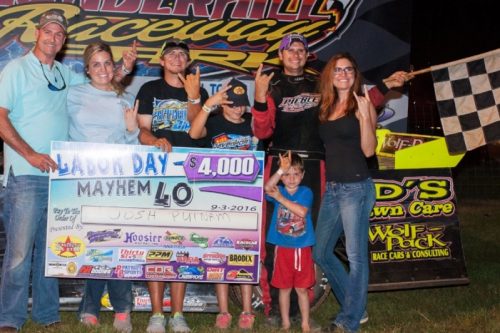 FAYETTEVILLE, TN– The Southern All Star Dirt Racing Series will be making its second stop of the 2016 season this Saturday night Sept 17th at the Smoky Mt Speedway in Maryville, TN., for the King of the Mountain Fall Classic a 40 lap event paying $5,000 to win for the super late models along with the UCRA late models as well the sportsman to make it an all late model night at the track.  In the earlier appearance of the year Mike Marlar of Winfield, TN., took home the $5,000 payday in the Rocking with the Stars event for his third career series win.

This Saturday night will be the 13th race of the season for the series and the 690th race in series history as well as 20th race in series history at the east Tennessee track.  It is also Hall of Fame Night as Smoky Mountain Speedway inducts five new members into the track’s hall of fame. Danny Glass, Bud Lunsford, Jimmy Monroe, Paul Lewis, and Harley “Fuzzy” Orange will be inducted during intermission of Saturday’s racing program. The intermission is set for approximately 8:00 pm.

Prior to racing action, several past hall of fame inductees will be present to sign autographs and meet fans. Herman Goddard, Randy Bethea, and L.D. Ottinger are tentatively scheduled to meet the fans from 6:00 pm until 7:30 pm. Also appearing will be former Southern All-Stars champion Duayne Hommell. It will be Hommell’s first visit to Smoky Mountain Speedway since his accident that ended his racing career in 2003.

Riley Hickman of Cleveland, TN., who is aiming for his 4th title, lost ground to second place Brad Skinner of Spring Hill, TN., in the last event at Thunderhill Raceway, even though it was not a big loss in points it still shows that every race counts and anything can happen, and with four races remaining in the season skinner and Statesboro, GA., driver Jim Rogers could be a factor.

Other drivers that are expected to be in action this weekend include Todd Morrow of East Ridge, TN., Dylan Ames of Harvest, AL., Casey Roberts of Toccoa, GA., T J Reaid of Acworth, GA., Donald McIntosh of Blairsville, GA., Tommy Kerr of Rockford, TN., Mark Vineyard of Knoxville, TN., Mark Doulas of Knoxville, TN., Corey Hedgecock of Maryville, TN., plus many more drivers from across the southeast and east Tennessee regional.

More information concerning the Smoky Mt Speedway can be found at   www.smokymountainspeedway.com

CRUISE WITH THE CHAMPIONS/DIRTONDIRT.COM ROOKIE OF THE YEAR: 1.Brad Skinner 934; 2.Jay Rogers 844