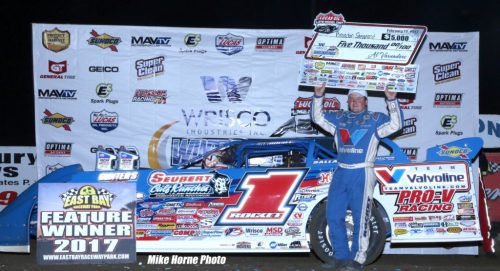 Shirley led the first four circuits of the 25-lap main event until Sheppard came from the outside of the second row to take over the top spot. Sheppard then held off Pearson, who had started seventh, for the victory. It was Sheppard’s fifth career LOLMDS win.

“It’s good to finally get a win at East Bay. We have been coming here for several years and to do it on opening night this year feels great. In a short race like this you must get to the front as soon as you can. The car was good all night long. We could pass cars low and high and then we finally cleared Shirley. It was a good race up front. This Rocket XR-1 Chassis is just fabulous and the Durham Race Engine was flawless.”

Once Sheppard had the lead, he had to wait through two caution flags inside the final five laps of the race. Pearson slipped under Moran on a lap 20 restart and held that spot to the finish in the Carlton and Kemp Lamm-owned, Dunn-Benson Ford, Longhorn Chassis.

“These young guys are wearing me out,” said Pearson, a 3-time East Bay winner who was among only seven drivers in the starting field who had ever won at the track. “It was a total turnaround from Golden Isles. The crew has worked hard on this car and the Larry Wallace Racing Engine was super-strong tonight as well. To come from where we did in just 25 laps we should be set-up well for the rest of the week.”

Moran realized that his slipping out of the groove with five laps to go cost him a shot at the win. “It was driver error. But I had fun tonight running up front like I did. Hopefully this bodes well for the rest of the season,” said the driver of the Tye Twarog Racing entry.