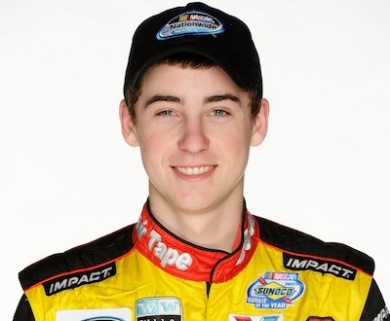 MOORESVILLE, NC– Brad Keselowski Racing (BKR) announced today that third-generation race car driver Ryan Blaney will pilot the BKR Cooper Standard / Draw-Tite / Reese Towpower entry in the NASCAR Camping World Truck Series for select races in 2012.  Blaney’s first race with BKR will be at Bristol Motor Speedway on August 22nd and he will compete in other select races during the duration of the 2012 Truck Series schedule as the BKR team pursues the Owners Championship.  As previously announced, Brad Keselowski will drive the No. 29 BKR Cooper Standard RAM in the VFW 200 at Michigan International Speedway on August 18th.

Blaney, the 18-year-old son of current Sprint Cup Series driver Dave Blaney, recently made his Nationwide Series debut for Penske Racing at Iowa Speedway where he finished 10th in the No. 22 Discount Tire Dodge Challenger.  In addition to his driving for BKR this season, Blaney is currently scheduled to participate in select Nationwide Series races for the Penske organization in the No. 22 entry.

“Ryan is undoubtedly one of the top up-and-coming driver talents in NASCAR and, with his being a part of Penske Racing, is a natural to run with us at BKR,” said BKR owner and Penske Racing driver Brad Keselowski.  “He has been around the sport for virtually his entire life and is a pure racer.  I believe Ryan will do a great job for the Team and our sponsors as we continue to focus on the 2012 Truck Owners Championship.”

With a winning junior developmental track record established in Quarter Midgets, Bandolero and Legend Cars, Blaney has also raced successfully in Super Late Models and the ARCA Series as well as the NASCAR K&N Pro Series.

“This season just keeps getting better and better for me,” said Blaney.  “To first join Penske Racing and now get to drive the BKR Truck is a terrific opportunity.  Hopefully, we can wheel the BKR Truck along with Cooper Standard, Draw-Tite and Reese Towpower to victory lane this season.”