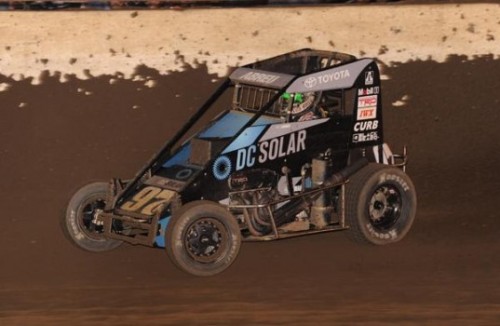 Rico Abreu finished off a stretch of Keith Kunz/Curb-Agajanian Motorsports domination Sunday night at Kokomo Speedway, becoming the fifth driver from the team’s stable to win during the five nights of “Indiana Midget Week.” However, a string of consistent finishes by RKR/Dooling Racing pilot Bryan Clauson throughout the week was enough to earn the Noblesville, Indiana driver his third “Indiana Midget Week” title.

Coming into the night, Clauson held a 40-point advantage over Spencer Bayston in the “Indiana Midget Week” standings. By feature time, Clauson had bumped up his lead over Bayston to 43, meaning that Clauson would merely have to finish 18th or better to clinch the title.

Clauson’s cause was benefited by his outside front row starting position, while Bayston rolled off from the eighth spot. However, it was Phoenix, Arizona’s Chad Boat who took control at the start of the 30-lap feature.

Two laps in, Tyler Nelson, Gage Walker and Dave Darland tangled in a turn two tussle that put both Walker and Darland on the sidelines for the remainder of the event. Nelson would restart from the tail.

On the lap three restart, third-running Christopher Bell and Abreu in fifth were the only two frontrunners to put their right rears up on the cushion while the majority clung to the middle of the racetrack.

Abreu continuously worked the high line, reeling in Clauson for fourth, and by lap ten, put four wheels in the fluff to ring around the outside of Clauson in turn two to take the spot.

On lap 12, the action came to a stop when Tyler Nelson barrel-rolled down the back straightaway. He was uninjured.

After the restart, it was a Keith Kunz triumvirate of Bayston, Bell and Abreu running nose-to-tail in second, third and fourth as Boat sailed out front. Bayston was able to catch Boat just before the halfway point, making an attempt for the lead to no avail as he bounced through the third turn, settling back into second.

On the 19th lap, Abreu rocketed past Bell in turn three for third, but a red flag for a flip by Holly Shelton on the main straightaway ceased the action momentarily as the track crews had to make minor repairs to the catch fence.

As the leaders shot into the third turn just after the ensuing restart, Abreu slid Bell for second simultaneously as second-running Bayston got sideways between turns three and four. Abreu banged wheels with Bayston, ricocheting in front of Bayston and into second-place with ten laps to go.

A yellow for debris in turns three and four closed the gap between first and second, providing Abreu a lifeline and a chance by placing him right on Boat’s tail tank for the restart.

At the drop of the green, Abreu rode the razor’s edge up against the wall as Boat matriculated the middle groove. Abreu continued to grind and grind as he applied pressure to Boat, ultimately pulling alongside Boat in a drag race that resulted in a dead-heat at the start/finish line on lap 22. Abreu was seemingly shot out of a cannon at the exit of turns two and four, distancing himself from Boat in the waning laps. Meanwhile, Bayston made his bid for second, banging wheels at the flag stand with Boat before ultimately emerging with the spot.

But, in the end, it was Rico Abreu who would not be denied, taking the victory in his Keith Kunz – Curb-Agajanian/DC Solar – Abreu Vineyards/Bullet/Speedway Toyota by a half-second over Bayston, Boat, Brady Bacon, Bell, Clauson, Tanner Thorson, Carson Macedo, Davey Ray and Ryan Robinson.

“Running the top the way we did tonight is tough because you have to keep the tires spinning and not let the motor get bogged down,” Abreu explained. “Midget racing is all about momentum and I felt like, running the bottom, you could get to the middle really quick, but then it would kill your exit because you are so sideways. So, I just tried to keep it straight up top and keep the wheels spinning, so it didn’t start bouncing. It means a lot to win another one of these races because this midget deal is so competitive right now with Clauson and guys like Brady Bacon, Tyler Thomas, plus eight Keith Kunz cars now. So, instead of just four or five competitive cars, there’s more like ten. Track position and qualifying are even more important now. It was a great week for us, but we would’ve liked to have had a better start to the week. But, big congratulations to Bryan because I know how tough it is to win this whole deal. I want to run it next year and get a third one.”

Although Bryan Clauson was unable to pick up a win in his RKR-Dooling Racing/Cancer Treatment Centers of America – B & H Contractors/Spike/Stanton SR-11 during “Indiana Midget Week,” his finishes of 2nd, 2nd, 2nd, 3rd and 6th showed remarkable consistency that corralled him the title by a 31-point margin. He joins Shane Cottle (2005) and Tracy Hines (2008) as the only drivers to win the title without winning a single feature.

“We were strong all week long,” Clauson exclaimed. “We knew tonight, seeing how rough and heavy the track was, that it wasn’t really our cup of tea, so we were just trying to make sure we did our job and finish this thing off. We ran strong all week; we just came up a little short the first few nights to get a win, but a few years from now, the only thing people will remember is who won ‘Indiana Midget Week.’ I’m proud of these guys, so we’ll just keep plugging along and see if we can get into victory lane.”

With his solid third-place effort in the Keith Kunz – Curb-Agajanian Motorsports/TRD – Mobil 1/Bullet/Speedway Toyota, Lebanon, Indiana’s Spencer Bayston vaulted himself into the point lead in the latest USAC National Midget standings by a single point over Clauson.

“I was running the top, just not running it right,” Bayston admitted. “When Rico went by me, he kind of showed me a little different line. I’d run it deep into three, but turn off too early and start bouncing. So, when he went by, it showed me I could run in deeper and come across a little smoother. I think if I’d gotten up there before he got to me, we would’ve been alright.”

Chad Boat scored a third-place finish after leading 21 laps in his Tucker-Boat Motorsports/PristineAuction.com – K & C Drywall/Spike/Esslinger, his best finish since a third at the Perris (Calif.) Auto Speedway on February 28, 2010.

“It’s a little disappointing to lead that much and run third, but it was still a great run for us,” Boat said. “We had a solid week and I was excited to get back here to the Indiana bullrings and to come here to Kokomo, which is my favorite track. We obviously wanted to cap off the week with a win, but we’ll take the third and try to keep the momentum up for Arkansas.”