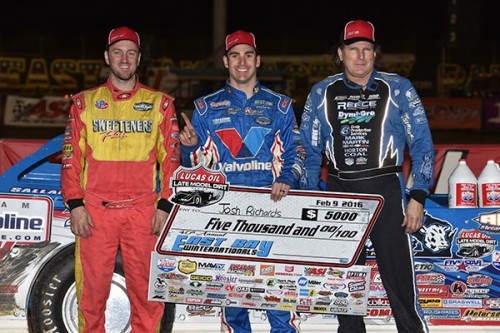 “We changed motors today. I was a little nervous about the balance we had in the car, but it worked out well in the feature. The track started off like last night, it was nice and fast. With the weather conditions tonight, you had to get to the front quickly to have a chance to win.”

“The car tightened up quite a bit. We were way too tight for the conditions out there. I don’t know how many more laps I had in that right rear; probably not many; the way it looks. Jared [Landers] got off to a good start. I just tried to stay under him and then he must have jumped the berm there and we were able to get by him. This place is tricky with the way you move around so much. I want to thank the fans for coming out tonight as well!”

“I would like to thank Valvoline, Ace Metal Works, Seubert Calf Ranches, Sallack Well Services, and everybody else who makes this possible. I can’t believe how the season has started! We will be back tomorrow and try to make it three in a row.”

Landers led the first eight laps, then fell to second behind Richards and held that spot until contact sent him spinning on lap 23. Bloomquist then moved into second and held off McCreadie for third.

Bloomquist who did not run Monday Night at East Bay said, “We got some rest last night. I have been feeling sick, so we decided to take the night off. The car was just a little bit free in the heat race, and I tightened it up way too much. That’s not how I like to drive it,” said the 2-time LOLMDS Champion.

“I thought Jared was getting a flat tire or something. I thought I was outside of him enough and I guess I just barely hooked him. I hate that because we are really good friends. We have race together a lot and that’s the first time something has happened between us. I apologize for that! It was absolutely my fault.”

McCreadie is following the LOLMDS for the first time in his career, and had another solid finish. “It’s such a relaxed atmosphere; we have had good starts to a season before, but we just need the consistency for the whole season. We feel like we have a winning combination here. I want to thank Sweeteners Plus, Longhorn Chassis, and Pro Power Engines. We will come back tomorrow night, looking to gain a few more spots.”

For the latest breaking news on the Lucas Oil Late Model Dirt Series, including the latest series standings, 2016 tour schedule, driver information, and more visit the official website at: www.lucasdirt.com.