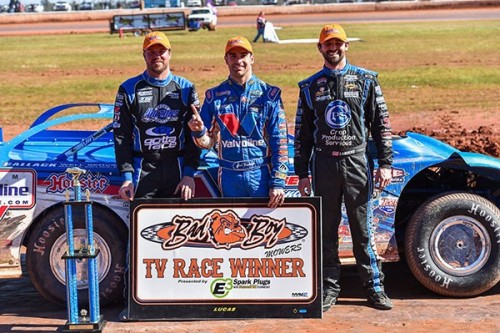 Jonathan Davenport, the reigning LOLMDS National Champion made a valiant effort on the final lap to pass Richards, but he spun allowing Richards to take the checkers first for the second time this weekend. Jared Landers slipped by Davenport for second, while Davenport re-gained control of his car to cross the line in third. Scott Bloomquist was fourth, followed by Eddie Carrier Jr.

“I kept watching the crew guys that were giving me signals. I knew he [Davenport] was still close when I was leading. He [Davenport] actually helped me when he passed me because he showed me another line. For a day race, the track had plenty of grip to it. I was conserving my tires, I didn’t know if they would last, but they did. The track crew did a great job with the track! To win twice down here, it’s a great start to the season.”

Landers was able to sneak by Davenport in the final corner to nab a second-place finish. “We have had a good car all weekend,” said the race runner-up. For a day race, the track was in really good shape, we could run anywhere on it! We went with a softer compound tire and it held up really well.”

“I’d like to thank everyone at Crop Production Services, Mark Martin Automotive, ASC Warranty, Big Dog Motorsports, Bad Boy Mowers, Sweet-Bloomquist Chassis, and Durham Race Engines. I think this is the best points start we have ever had!”

Davenport gave Richards one final shot heading to the checked flag, but ended up getting sideways. He stopped momentarily and re-gained control as the race stayed green to the finish. “It’s Super Bowl Sunday so I was going for the win! I got in the corner and was already committed and it just turned on me. We were fortunate to finish third. I am glad we didn’t lose any more points than we did.”

“The track crew did a great job with the track today. Turns one and two were a little slick, but we could run into turns three and four pretty hard. I want to thank Kevin and Lee Roy Rumley. Today is Lee Roy’s 80th birthday and like last year, was hoping to bring him home a win.”

In preliminary action, Brian Shirley set the overall Miller Welders Fast Time (Group B) amongst the 42 entrants, with a lap of 15.231 seconds. Jonathan Davenport set the fastest time in Group A with a time of 15.240 seconds. Jonathan Davenport, Jared Landers, Brian Shirley, and Josh Richards won their respective heat races. Chris Madden won the B-Main.