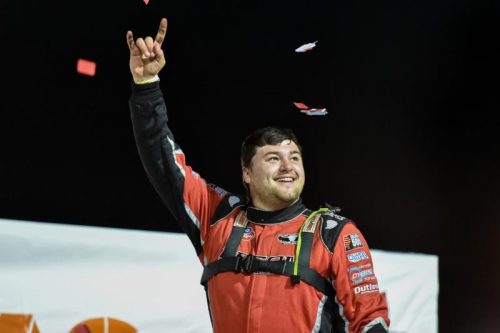 “I hate it for little Billy, but sometimes that stuff happens. We will take it any way we can get it. You never know what’s going to happen at the end of a race at this place. I want to thank Chip Stone, Randy Weaver, and all my sponsors for making this possible. This is a great way to start our season,” said Overton.

“It’s great to win here in my home-state. There was a really good crowd here tonight – the most I think I have ever seen here on a Friday Night. We look forward to coming back tomorrow night and getting our team another win. Thanks to Longhorn Chassis, Cornett Racing Engines, Mission Transport, CrossFit by Overton, Outlaw Racing Southeast, and A.F. Stone Professional Medical Services.”

McCreadie was beginning to gain on Overton when the final caution of the race flew with six laps to go. On the restart, Overton pulled away to get the win.

McCreadie was happy with his second-place run. “I have no tread left on the right rear tire. There wasn’t any use in pushing it at the end. He [Overton] pulled away, but I am sure he probably didn’t have any tires left as well. This is a good start for the points. We have been working hard and it paid off here tonight. Let’s just hope we can keep doing this and be more consistent this year.”

Owens also got his season off to a good start with his third-place finish. “We are really happy with the car, we switched Durham Racing Engines this year and it was good tonight. I know the track crew worked hard on the track. I hope that after tonight, this momentum continues for the rest of the season.”