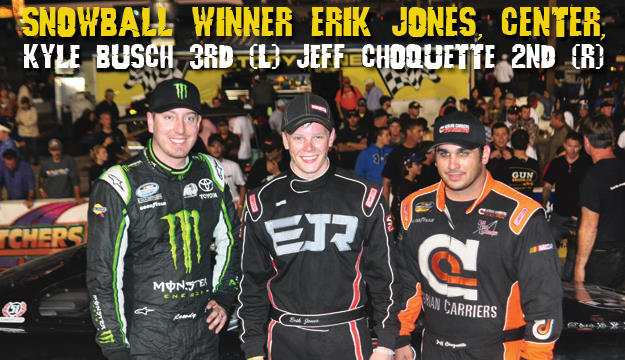 By Chuck Corder – The anticipation boiled inside Carol Jones.Sandwiched between fans and Escambia County’s finest, behind the track gate at Five Flags Speedway, she watched as her boy Erik Jones climbed out of his black No. 4 Super Late Model in Victory Lane and celebrated his improbable 300-lap win at the 45th annual Snowball Derby.

Carol Jones clinched her fists and grinded her teeth. Her prince, now the king of short-track racing’s heaviest crown, wrestling away the Tom Dawson trophy from NASCAR superstar Kyle Busch.

And she couldn’t get through these unfamiliar faces.

“I’m going to throw up,” she said. “This is amazing. This is unbelievable. This is the best.”

Cutting through the kindness of strangers, mother finally reached son and the two shared a lifetime of adulation.

Jones also is the first driver to win in his first Derby attempt since Gary St. Amant did it 20 years ago.

What made it more head-turning was who he beat. Jones never flinched when Busch, the 2009 champ, pressed him for the lead.

The teenager dug in, fought back and took it back to lead the final 18 laps, cruising to an 0.752-second margin of victory while Busch finished third after surrendering second to Jeff Choquette.

“We just beat NASCAR star Kyle Busch,” Jones said. “I can’t believe it. Guys race for this championship for a lifetime and don’t get it. And for me, my first time, to get it? It’s amazing.”

Jones led three times for a total of 123 laps, which was tops Sunday. Busch was out front three times, as well, but only led 14 laps.

Johanna Long was a distant 14th, struggling with her car all afternoon and failing to deliver another Derby title to her throng of hometown supporters.

Pole sitter David Ragan, another of the several group of NASCAR faces Sunday, had issues early before salvaging eighth.

Elliott was snakebitten in his title defense. The now 17 year old was involved in a mid-race incident and spent lengthy periods in the pits trying to get right.

After congratulating Jones in Victory Lane, Elliott walked away, lamenting his finish and, more notably, Busch’s return to Pensacola.

“I’m disappointed. We should be here,” Elliott said. “The only thing I’d do different is I’d tell Kyle Busch to not come down here and race with us. He needs to show respect to all drivers.”

T.J. Reaid, who used to be a part of Busch’s late model teams, got spun out by his former boss while leading early in the race.

After a subsequent crash, Reaid held nothing back in expressing his feelings toward his ex-employer.

“I guess (Busch) got pissed off I got him on the restart,” Reaid said. “Typical him, he’s gonna (expletive) cry.”

As polarizing as he might be, fans had to appreciate Busch’s valiant comeback. He was penalized to the rear of the 36-car field for spinning Reaid, but managed to be a serious factor in crunch time.

“If we had it a fuzz better, we would’ve got Erik,” Busch said. “My guys gave me a great piece. I hate it we didn’t have enough.”

Busch knew he had his hands full when Jones began making his way through the field.

Busch has long admired the kid’s talent, recruiting Jones to drive as his emergency backup at another late model race three months ago before Busch was able to avoid a conflicting race.

Words that would surely make a momma proud.

“Kyle’s one of the best, obviously, but I wasn’t going to lose this,” Erik Jones said. “It’s hard to describe what it means to me.”