NO MORE SECOND THOUGHTS; WINDOM FINALLY HITS THE WIN COLUMN AT THE BURG 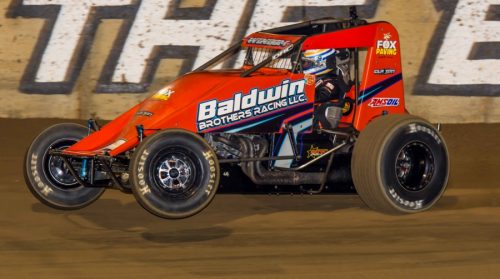 (Richie Murray – USAC Media) Lawrenceburg, Indiana – Chris Windom knows how to win.  His 15 career USAC AMSOIL National Sprint Car wins certainly attest to that.  Of those 15 wins, though, one place that had eluded him over the past decade was southeastern Indiana’s Lawrenceburg Speedway.

In almost a cruel way, Windom had finished second on five different occasions during his career in USAC competition at the three-eighths-mile dirt oval, including last Fall’s most recent stop on the tour.

On Saturday night, the Canton, Illinois native would shed the label of perennial Lawrenceburg runner-up by leading all 30 laps on his way to victory in the 2017 Midwest season opener for the series.

After a rough February patch in the first two races to begin the season down south in Ocala, Fla., Windom came back to the Midwest eager to pick up right where he left off last season in his Baldwin Brothers Racing/Fox Paving – AMSOIL/DRC/Claxton.  After picking up a non-sanctioned sprint car win a week ago in Mansfield, Ohio, Windom followed up by claiming his first USAC victory at Lawrenceburg, one that was a long time in the making.

“I’ve been fast here a lot over the years,” Windom recalls.  “I know I’ve finished second quite a few times here, but I’ve never been able to click off a win.  But we’ve been fast all year; we just had a little misfortune down in Florida, but it’s nice to come back up here and get the momentum going early here in the Midwest.”

Windom began the 30-lap feature from the outside of the front row alongside polesitter Chad Boespflug.  By the time the field reached turn one just after taking the green flag, mayhem ensued as both occupants of the third row were wiped out in a frightening double-flip involving Dave Darland and Chase Stockon.  Both drivers were able to walk away, but their respective races were over just as they had begun.

On the complete restart, Boespflug initially held the advantage as he and Windom went side-by-side into turn one, but Windom used a big run down the banking off turn two to blast around the outside of Boespflug to grab the lead.  Each time during the first two circuits Boespflug stuck a nose underneath, Windom always had an answer.  Once clear, Windom shot away to a substantial advantage, holding a full-straightaway lead by the time the caution fell for the slowing car of Carson Short on lap nine.

With the lead erased and the field reset for the ensuing restart, Hunter Schuerenberg began to make his charge, slipping underneath Boespflug for second into turn three.  Schuerenberg’s chase was aimed at running down Windom for the lead, but the pursuit would end abruptly when he biked it in turn one, sending him into a violent series of barrel-rolls before coming to a rest near the turn two wall.  Schuerenberg was able to climb out of his battered machine and walk away from the breathtaking accident.

The lap 10 restart saw Boespflug once again trying to gain any foothold he could on the bottom, but the undaunted Windom kept his foot in it and drove around the outside of Boespflug to maintain his lead.

“I knew I just had to have a good first and second lap on those restarts because Chad could slide up in front of me there,” Windom explained.  “It was hard to hit my marks consistently running the line I was running.  I knew I had to hit those laps and we’d be able to pull away from him.”

Just past the halfway point, Windom neared the tail end of the field.  As Windom weaved his way through the lapped traffic, a trail of sparks began to stream out of the rear of the orange No. 5.  With the brake rotor glowing red hot and Windom mired in a logjam, Boespflug was able to shrink the deficit somewhat.  But, by lap 24, Windom was in the clear as he lapped all the way up to 10th place.

“I was hoping my brakes weren’t going out because they were sparking pretty early in the race,” Windom recalls.  “I tried to lay off them a little bit, but it was kind of hard to since I didn’t know how close anybody was to me.  I figured I would run as hard as I could and if they went, they went out.  I never lost the brakes, though, but I was on them hard.  I could see the sparks flying up in front of my eyes going into the corner.  I had to get on the brakes pretty hard to enter the way I was because of the holes getting into turns one and three.”

However, with Shane Cottle coming to a rest backwards on the inside of turn four with five laps remaining, the yellow flag would fly and bunch up the field for one final run to the checkered.

As Windom ventured up to the top of turn one on the lap 26 restart, Boespflug made one last go of it as he tried to slide up in front of Windom between turns one and two.  Rinse-and-repeat, the second, third and fourth verses were the same as the first when Windom stood up in his seat, never flinching and never batting an eye, as he cruised right around the outside of Boespflug off turn two to take the advantage for good, distancing himself from Boespflug by 1.371 seconds at race end.  Justin Grant was third followed by Jon Stanbrough and a career-best performance for Landon Simon.

Windom’s first ever April USAC triumph was his 15th overall in the series, tying him with Bobby East, Cory Kruseman, Jud Larson and Brian Tyler for 31st all-time.  His earliest season victory before Saturday night was a May 20th win in 2011 at Bloomington (Ind.) Speedway.

Though Windom led the entire distance from his front row starting spot, his road to victory was anything but smooth and steady.  It required precision and laser-sharp focus on every centimeter of the track for 30 laps.  Something that a fast racecar alone cannot overcome.

“I know we had a really fast car, but it was a tough track to run 30 consistent laps,” Windom admitted.  “I started concentrating as hard as I could to hit my marks.  You had to be very careful about where you chose to hit your marks.  We were able to hold it together and come away with a win.”

The string of consistent runs Hanford, California’s Chad Boespflug has posted in the first three races have resulted in a fourth and a pair of runner-up finishes, including Saturday night at Lawrenceburg in his Dynamics, Inc./Mean Green – PAC Springs/Maxim/Claxton.

“This is huge for us.  I haven’t been very good here the last few years, so I’m happy to get a podium here tonight,” Boespflug exclaimed.  “We were fighting some throttle issues about midway through the race, going down into the corner and had to pick the throttle pedal up.  It wasn’t wanting to return.  Little things like that can screw with your head and make you focus on too many other things rather than what you need to be focusing on.  Overall, it was a great night.  The car was fantastic all night and we’ll carry this momentum on to Bloomington and Haubstadt in a couple weeks.”

Ione, California’s Justin Grant retained the series point lead after finishing third in his Sam McGhee Motorsports/Mike McGhee & Associates – Brown & Miller Racing Solutions/Maxim/Foxco.  It was his third top-three finish in as many starts to begin the season after a win and a second-place finish in February in Ocala, Fla.

“As treacherous as the track was tonight, I’m happy to come away with a podium finish,” Grant said.  “I’ll call it a solid points night.  We’d obviously like to win it, but Chris (Windom) was in his own race.  Our car was really good, but we just didn’t have enough for them.  I’m excited to keep racing with Sam McGhee and the No. 11 sprint car.  They give me a great car every night and it’s a joy to drive it.  Hopefully, we can climb up a little higher on the podium next time.”