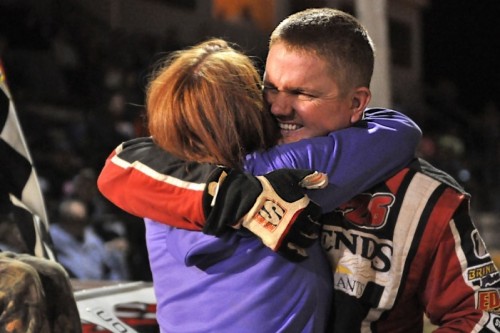 Fields who was very emotional in victory lane said, “He had watched his dad Shorty Fields race this place since it opened in 1988 and he has considered it his home track since his racing career started and that it was one of the biggest if not biggest wins of his racing career.” “You always heard about the Southern Al Stars, they are the ones that were here before all the other tour started, if really means something to me to be added to the list of drivers names that have won races on this series.” said Fields.

Fields set fast time in White Performance qualifying and started on the pole alongside Riley Hickman and at the drop of the green flag Fields pulled ahead of Hickman in one and two and then set sail for the first 35 laps as he worked traffic low and high and left the battle for the races between Eric Hickerson and Hickman who swapped the second spot back early and late in the race, when Hickman got back by Hickerson on the only restart of the night that came after Brett White slowed with ignition problem, Hickman took over the second spot with four laps to go but he was not going to catch Fields in his Mastersbilt chassis Custom Race Engines sponsored by Fields Auto Sales/Doss Brothers/Legends Steakhouse/Superior Restoration. Hickman finished second and moved into a tie for the series points lead with Brad Skinner who came home in the fourth spot behind the third place car of Eric Hickerson of Linden, TN., and the first spot went to Scott Cook of Shelbyville, TN.

Sixth place was Josh Putnam of Florence, AL., who wrecked his car in qualifying and borrowed a car from Donald Johns and moved up through the field. Seventh place went to Jim Roger of Statesboro, GA., in his first top ten finish of the season, eighth to John Minon of Adams, TN., making his first start with the series this season, ninth to Ben Kittrell of Mt Pleasant, TN., and tenth to Brett White of Kosciusko, MS.

The next race of the Southern All Star Dirt Racing Series will be on Saturday night May 14th at the Senoia Raceway in Senoia, GA., the Billy Clanton Memorial 50 lap paying $5,025 to win.

CRUISE WITH THE CHAMPIONS/DIRTONDIRT.COM ROOKIE OF THE YEAR: 1.Brad Skinner 470; 2.Jay Rogers 430